Announced in October 2019, the Exynos 990 was Samsung’s premium chipset for 2020, debuting with the Galaxy S20 series and likely earmarked for the Galaxy Note 20 as well. Samsung manufactured this chipset and the accompanying 5G Exynos Modem 5123 on its 7nm EUV process technology. The Exynos 990 will likely go down in history as the last Samsung processor to feature custom Mongoose cores. Samsung has decided to shut down its custom CPU project, making the Mongoose M5 cores the last in-house custom design from the company. Going forward, it will most likely license off-the-shelf ARM CPU IP for future Exynos processors.

Samsung claims that the new M5 microarchitecture is 20% faster than the M4 in the Exynos 9820 with up to 20% improvements also touted for both the performance and the power efficiency of the GPU. It’s capable of powering a single 108MP and dual 24.8MP + 24.8MP camera setup and can process 8K video recording at 30fps.

The Exynos 990 is Samsung’s first premium chipset to feature a 120Hz refresh-rate driver. What that means is the smartphones that feature this mobile processor can offer a 120Hz refresh rate display, which is exactly what the Galaxy S20 series does.

The Exynos 990 has three clusters of processor cores that have different architectures. The first cluster features Samsung’s own Mongoose M5 cores that clock up to 2.73GHz for peak performance paired with a middle cluster equipped with 2.5GHz ARM Cortex-A76. The final cluster is made up of four 2GHz ARM Cortex-A55 cores for minor tasks and increased power efficiency. The complete package promises to deliver 20% improved performance compared to its predecessor, the Exynos 9820.

Samsung delivered a big GPU upgrade with the Exynos 990 by pairing it with the ARM Mali-G77 in an MP11 configuration. It’s the first generation GPU based on ARM’s Mali Valhall architecture, delivering a boost in high-end graphics performance and augmented reality. Samsung claims that the new GPU improves performance and power efficiency by up to 20 percent.

Samsung transitioned its premium chipsets from LPDDR4X memory to LPDDR5 with the Exynos 990. This transition helped increase the memory controller frequency from 2093MHz to 2750MHz with data rates of up to 5,500 Mb/s. The SoC is capable of being paired with up to 16GB of LPDDR5 memory, an implementation seen on one variant of the Galaxy S20 Ultra. The Exynos 990 can support both UFS 3.0 and UFS 2.1 storage memory types. 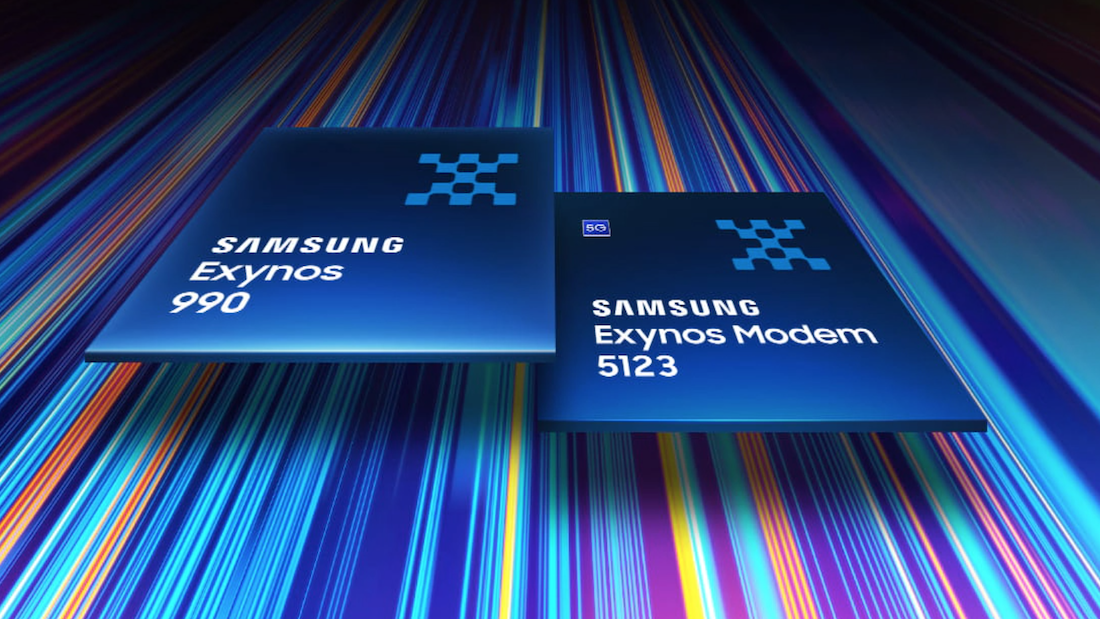 The Exynos 990 is a standalone application processor which means that it doesn’t have an integrated modem. However, it’s coupled with a discrete 5G Exynos Modem 5123. The modem provides a complete multi-band solution as it supports everything from 2G to sub-6 and mmWave 5G. Samsung upgraded the chip’s maximum throughput and it supports downlink speeds of up to 3Gbps on 4G LTE, 5.1Gbps in sub-6 5G and a whopping 7.35Gbps on mmWave networks.

On-device artificial intelligence tasks are handled by a new dual-core neural processing unit (NPU) which is optimized for the computation of deep learning algorithms. It supports functions like Bixby, augmented reality and image recognition. The neural processing unit is paired with an improved digital signal processor that’s capable of performing over ten-trillion operations per second.

For example, if the NPU detects a face in the frame when a picture is being taken, it will enable the image signal processor (ISP) to automatically apply the best settings for that particular lighting condition and the subject’s skin tone. The ISP also has advanced algorithms that help reduce noise, improve texture and edge artifact in photos.

Looking at specifications alone is never enough as most people prefer having a yardstick to judge just how good a new product is compared to its predecessor. That’s why there’s so much hype around benchmarks and also why all mobile processors run the benchmark gauntlet.

Benchmark apps run a standard workload on all devices to level the playing field. Various aspects of the device such as CPU, GPU, memory and more are then tested to see how it performs compared to other devices. Benchmark results are great for looking at percentage gains in performance, but they aren’t necessarily indicative of real-world performance which depends on a wide variety of factors. All of the following benchmarks and leaderboards are accurate as of April 2020. Another popular benchmark for Android devices, AnTuTu assigns an overall numerical score as well as an individual score for every test that it performs. Our unit scored 514143 overall. With an average score of 519297, the Exynos 990 ranks third on AnTuTu’s leaderboard. 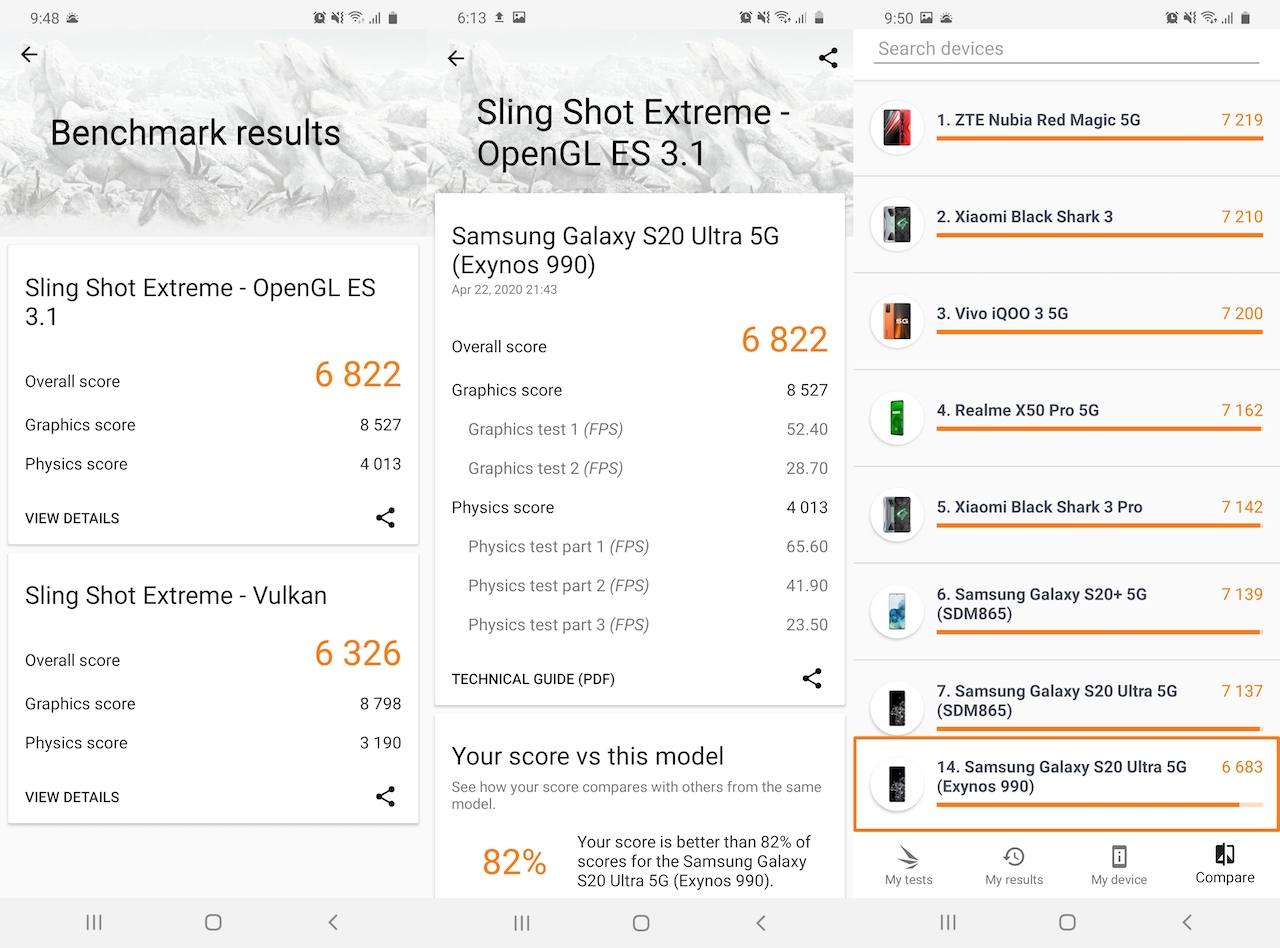 3DMark is a widely used benchmark for measuring GPU and CPU performance with Vulkan and OpenGL ES benchmarks. The workload includes depth of field, volumetric lighting and instanced rendering. The Exynos 990 has an average score of 6224 and sits in 13th place on the Slingshot extreme leaderboards, while our unit scored 6683 overall.

The following Samsung Galaxy smartphones use the Exynos 990 processor: