The unlocked Galaxy Note 8 Oreo update is finally being rolled out in the United States. All four major carriers – Verizon, AT&T, T-Mobile and Sprint – have already released the update for the Galaxy Note 8 on their networks so it’s about time that the unlocked variant received it as well.

Multiple reports have come in confirming that Samsung is now rolling out the unlocked Galaxy Note 8 oreo update in the United States. Those who own the handset in the country should now keep an eye out for an over-the-air update notification which should be arriving soon.

Samsung had confirmed last week that the Android 8.0 Oreo update will be released for the Galaxy Note 8 in the United States within 2-3 weeks. We saw its carrier partners release the update over the past week and now it’s the unlocked variant’s turn.

It’s no wonder that while the Galaxy S8 and Galaxy S8+ have received Oreo on all four major carriers in the country, the unlocked variants have yet to receive Oreo. Unlocked Galaxy S8 owners in the US won’t be happy to see that the Note 8 is now getting the update while they’re still on Nougat.

Samsung is now rolling out firmware version N950U1UEU3CRC1 for the unlocked Galaxy Note 8 in the United States. It weighs in at 1.1GB and brings all of the features that are included in Android 8.0 Oreo and none of the carrier bloatware which is a major reason why customers prefer to buy unlocked models in the first place.

Have you received the unlocked Galaxy Note 8 Oreo update in the United States yet? Let us know in the comments below. 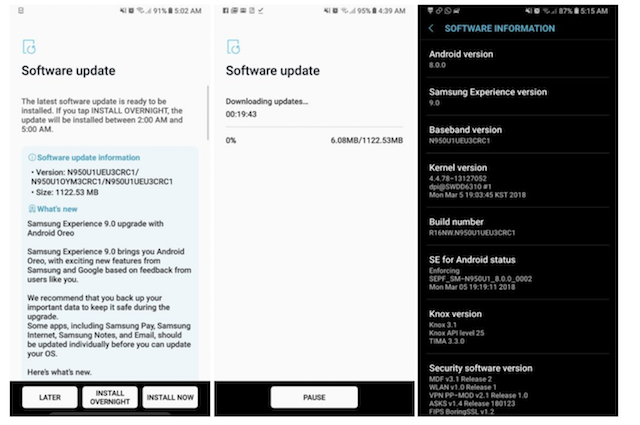 Updated my unlocked Note8 this morning (US). It is in bad shape now!! Samsung has been no help either. “Clear the cache on Gmail, I’ll call you back in 5 minutes…” That was a joke! Never heard another word. Trying to learn how to roll it back now… Wish I’d never seen it.(The update) It only made my phone useless for texts, emails (gmail) – (apps just stop after a couple of seconds) and I don’t know what else is acting up… Its on Straight Talk LTE/CDMA (Verizon compatible) SIM card. Less than two month old phone, my only phone… Read more »

Just updated mine. Not sure there’s much difference.

would be great if they released it on XEU in the UK, literally the entire world has got it except unlocked UK XEU. Ridiculous. and no i’m not dirty flashing on odin.

Orio update in the UK ? It would be nice to receive security updates

Once again UK left out in cold by Samsung. I am sick and tired of waiting. I am on the samsung upgrade program but shall look to other manufacturers when I change handsets.

Why? In reality you will be unlikely to even notice a difference because the changes are so minimal. Just shows that Samsung’s Android implementation is already a generation or so ahead of vanilla Android 🙂

In the same UK boat but to be honest I am actually quite glad. I haven’t got the time to backup the phone and do a full re-install and reconfigure at the moment (Thanks Samsung and Google. This is the the one decent thing Apple does – simplify and automate a seamless backup and re-install) and there isn’t anything in the update that I am missing or consider worthwhile.

I got the update on my US cellular Note 8 yesterday

How’s the impact of the update on battery life, speed and smoothness?

It’s about the same to what it was before. I do notice sometimes it loads apps and pages a little less quickly than it did on Nougat, but battery life seems to be about the same for me. I do notice pulling down the notification panel is smoother than before however. Overall just an okay update. Nothing ground breaking.