Samsung’s decision to release the Galaxy S21 series earlier than usual had something to do with wanting to bring the fight closer to Apple and the iPhone 12, or at least this is what a few reports have previously suggested. And it’s probably a good thing that Samsung has released the new flagship in January, seeing how Apple already enjoyed massive success in Q4 2020 thanks to the iPhone 12 series.

Apple outperformed Samsung in the fourth quarter of 2020 and took the lead with a market share of 23% compared to Samsung’s 17%. According to market research firms Canalys and Counterpoint Research, the Cupertino-based company shipped nearly 82 million iPhones in Q4, whereas Samsung recorded 62 million smartphone shipments over the same time period.

IDC’s figures are a bit off compared to the other two market watchers but they tell a similar story: Apple was able to ship more smartphones than Samsung in Q4 2020 and has secured the top spot over the three-month period.

Samsung maintains the lead throughout the year, at a cost

Apple was able to outperform Samsung in the fourth quarter thanks to the iPhone 12 series, but Samsung still had a higher market share and more shipments across all four quarters. By the end of 2020, Samsung had a global market share of 19% whereas Apple held 15%. Samsung shipped roughly 255 million smartphones throughout the year while its biggest rival fell short with a total of 201 million shipments.

Sadly for Samsung and many other OEMs, the smartphone market as a whole declined by 2% in 2020. The Korean tech giant was unable to surpass its 2019 shipment figures, whereas Apple managed to outperform itself. Samsung shipped nearly 300 million smartphones in 2019 and recorded 50 million fewer shipments in 2020. Likewise, in Q4 alone, Samsung experienced a 11% year-on-year decrease.

It will be very interesting to see if Samsung, and indeed the new Galaxy S21 flagship series will have the capacity to retake the lead from Apple in Q1 2021, and whether or not the company’s strategy to release the new lineup earlier than usual will pay off. So far, Samsung appears to have adjusted its Galaxy S21 shipment figures by lowering its expectations. 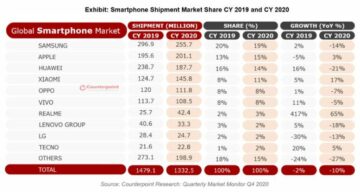 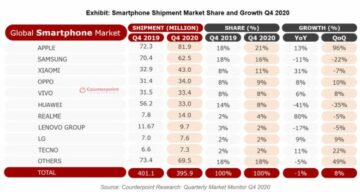