Samsung reported its highest-ever quarterly revenue for Q3 2020. It even recaptured the number one rank in the Indian smartphone market after a gap of two years. Now, it is being reported that the Galaxy S20 was the world’s best-selling 5G smartphone series.

Despite Samsung’s strong performance in the 5G smartphone market, it is being predicted that its market share could decline in Q4 2020 and the rest of 2021 as Apple recently launched the iPhone 12 series. All four iPhone 12 series models—iPhone 12 mini, iPhone 12, iPhone 12 Pro, and iPhone 12 Pro Max—come with built-in 5G connectivity.

The South Korean smartphone giant is expected to counter Apple by launching more mid-range and entry-level 5G smartphones in markets where 5G networks have been rolled out. The Galaxy A42 5G has already been showcased, and it should launch in more markets in the coming months. 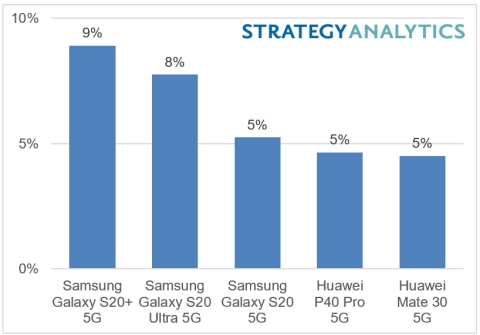