The Galaxy J7 Duo is a confused smartphone. Well, maybe that’s a deliberate move on Samsung’s part to make sure the J7 Duo is able to stand apart from the tough competition in the budget segment in India, but this phone is an odd mix of the new and old. The Galaxy J7 Duo comes with a dual rear camera with the Live Focus feature, Samsung’s capable new Exynos 7884 processor (an underclocked version of the Exynos 7885 that powers the Galaxy A8 and A8+), and – wait for it – a removable battery!

It’s been some time since we’ve seen a budget Galaxy phone with a removable battery in the same price range as the J7 Duo (which costs Rs. 16,990), and again, it looks like a deliberate move that might help the J7 Duo stand out in the sea of metallic budget phones that have permeated the Indian market. Add to that the fact that it runs Android 8.0 Oreo out of the box, and the J7 Duo has some impressive credentials. Sure, Xiaomi’s smartphones, which are the primary competition for Samsung in India, still offer more than you can expect for the price tags they carry, but Samsung’s latest J7 variant isn’t without its fair share of attractive features. 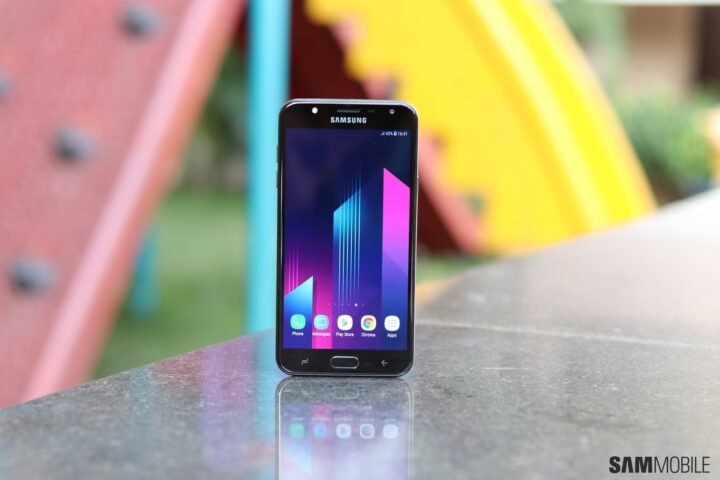 Even an AMOLED display is making a comeback, as Samsung has been oddly keen on equipping all of its Galaxy J spin-offs in India with LCD displays in the last year or so. Other specs include 4GB of RAM, a 13-megapixel and 5-megapixel rear camera pair, an 8-megapixel front camera with a selfie flash, a 3,000 mAh battery, and 32GB of internal storage that can be expanded with a microSD card.

The Exynos 7884, meanwhile, has the same setup as the Exynos 7885. Two Cortex-A72 cores are accompanied by six Cortex-A53 cores, but with a lower clock speed. High-performance processor cores have arrived on Samsung’s budget lineup for the first time, and it’s perhaps the biggest upgrade offered by the J7 Duo. Just like the Exynos 7885 finally allowed a Galaxy A lineup smartphone to offer the kind of experience one expects from these “premium mid-range” phones, the 7884 should negate what has been the most significant issue with Samsung’s budget devices: Stutter, lag, and poor long-term performance.

Whether this upgrade will come to the mainstream Galaxy J lineup with the Galaxy J8 (or whatever the new device for 2018 will end up being called) remains to be seen, but for now, let’s talk about what we feel about the Galaxy J7 Duo after the initial few hours of usage. 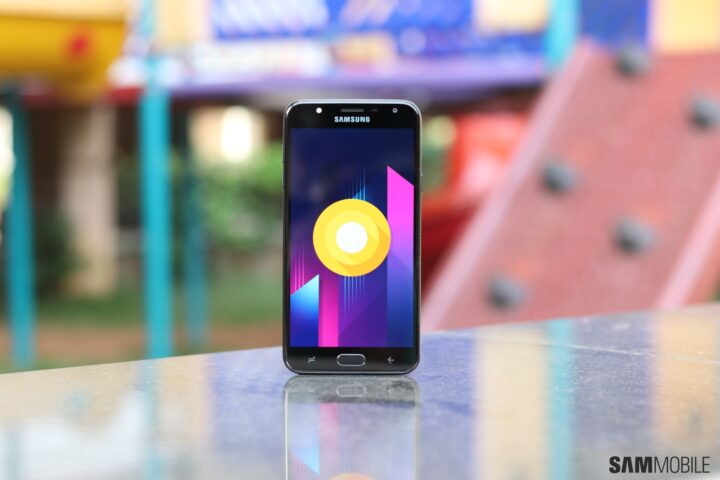 My first order of business after setting up the phone was to try out a couple of high-end games to see what kind of difference the Exynos 7884 makes. Thanks to the 720p resolution, Modern Combat 5 runs without hiccups at the optimal graphics settings (there is no high quality option, which might be an artificial limitation set by the game for what is an unknown SoC at this time), which made me heave a sigh of relief. I tried another high-end title, Batman: The Enemy Within, which is a point-and-click adventure game that is also available for consoles and PCs. Here, the frame rate isn’t always as smooth as I’d like, but it runs miles better than how it does on Samsung’s weaker budget and mid-range phones.

Clearly, the Exynos 7884, despite its low clock speed (1.6GHz, while the A8 runs at 2.2GHz for the A73 cores), is proving helpful here. The general user interface is smooth and quick as well, but that’s the case on lesser Galaxy phones as well when you’ve barely started using a device, so I’ll leave a verdict on the general software experience for another time. I also don’t see as many Android 8.0 Oreo features that the Samsung Experience 9.0 UX brings to the flagship phones, but basic Oreo features such as more helpful and customizable notifications and app shortcuts are present. As firmware for the J7 Duo had revealed, the J7 Duo comes with the January 2018 security patch in India, and there was no update available at the time this hands-on was written. 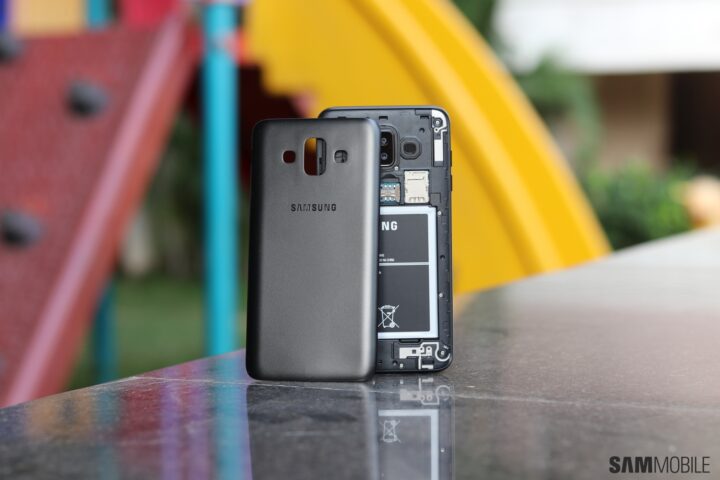 Let’s talk about the design and that removable back cover and battery. As you can tell from the photos, the J7 Duo doesn’t look any different from other Samsung phones without the 18:5:9 Infinity display. On the black variant, it manages to look attractive, with the dual rear camera adding more charm to what is otherwise a basic rear end. The removable cover is made of plastic and doesn’t feel too flimsy. But I found it rather hard to put the cover back on after removing it and had to resort to almost beating the cover into submission, though it’s hard to say if this is just a problem with our unit or a general issue. The battery, thankfully, comes off easily and goes back in without tantrums, though it’s unfortunate that the battery must always be removed to access the SIM cards.

Now, about that AMOLED display: The 5.5-inch panel looks good, and the 720p resolution is fine for regular usage. The pixelation is easy to notice inside games and even inside the camera, but most folks are likely to be unfazed by the not-so-high screen resolution. Sadly, Samsung has once again skimped on a brightness sensor, and the same goes for backlit capacitive keys, so you will be left fumbling at times to make the screen legible and miss hitting the navigation keys in the dark. 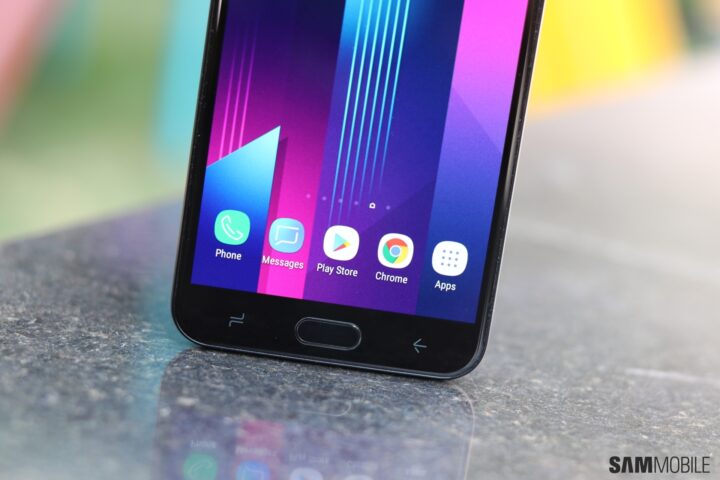 I also tried out the Live Focus bokeh feature on the camera. Since the second rear camera is a standard 5-megapixel sensor, you have to move in close to a subject to take Live Focus pictures. That’s in contrast to the dual camera on the Samsung flagships, where the secondary camera is a telephoto lens and hence zooms in on a subject. It’s both a disadvantage and an advantage on the J7 Duo, I think. Since Live Focus doesn’t zoom in, you need to move close to a subject for the feature to work properly. But it also means you don’t have to always move back from a subject as is the case with the flagship cameras. I only managed to take two Live Focus photos so I won’t say how good the camera can be, so you’ll have to wait for our full review for a conclusion on the J7 Duo’s imaging capabilities. The two photos are attached below for your viewing pleasure.

Well, our full review will also tell you how the Galaxy J7 Duo fares as an overall smartphone, so make sure you check back on SamMobile later this month for our complete verdict. For now, check out the photos of the Galaxy J7 Duo and let us know what you think about the phone. 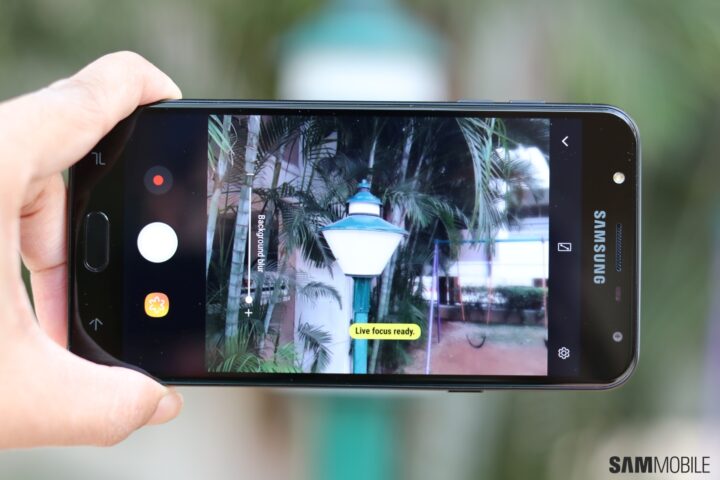 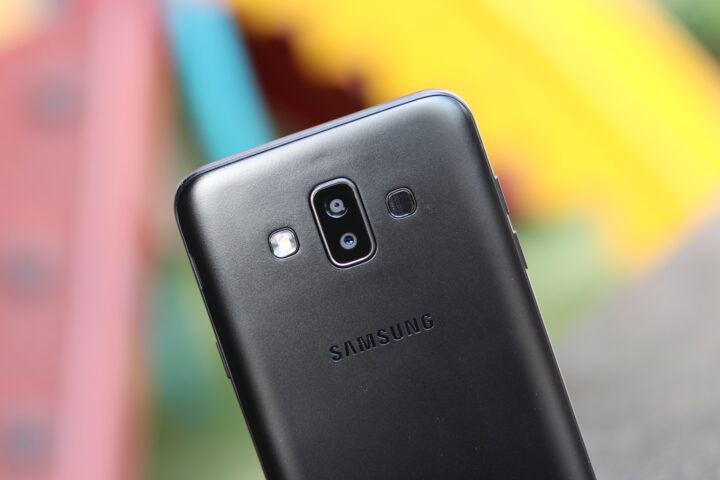 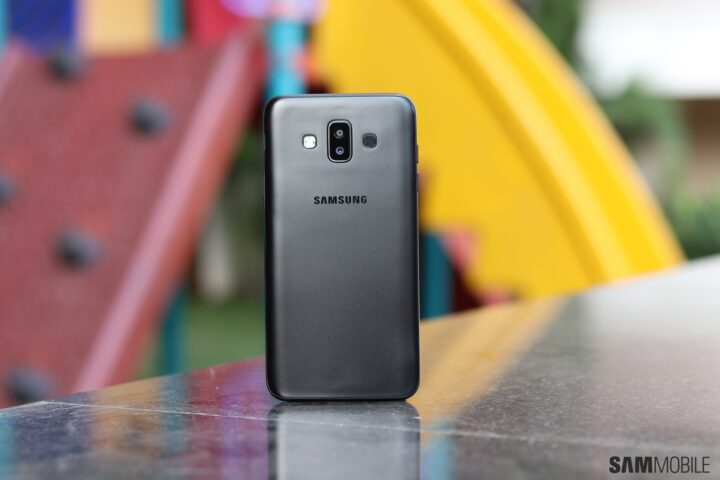