Update: It seems the method of answering calls using the bezel involves rotating it clockwise a couple of times. Also, the feature should be enabled by default after the update is installed, instead of needing to be manually enabled as mentioned in the original story. It may also have been already available for some users since the Gear S3 was launched, and we’re trying to confirm if it might not have been available in some countries before.

Samsung is rolling out a minor update to the Gear S3 today, adding a nice little use case for the rotating bezel on the watch. The update adds a new accessibility feature that will allow Gear S3 users to accept incoming calls by rotating the bezel. It’s surprising the company never thought of this option before, but it has now, and we are sure Gear S3 owners will welcome the latest update with open arms.

The bezel is even more useful with the update

We haven’t received the update on any of our watches yet, so we’re not exactly sure where the option to answer calls using the bezel would be found. Probably in the Accessibility menu of the watch’s Settings app, under the Vision submenu, since Samsung is calling it a “visual accessibility” feature. It does make sense that the option would have to be manually enabled, as otherwise you might end up accepting a call you don’t want to answer if you manage to move the bezel by mistake (which would be fairly easy if your watch’s bezel ring has lost some of its friction, something that can happen after a few months of regular use).

The update is going out to both the frontier and classic versions of the Gear S3, with firmware versions R770XXU2CRE3 and R760XXU2CRE3 respectively. It’s a 13.65 MB update, and you should be able to download it from the Samsung Gear app on your connected phone or tablet, via the About Gear » Update Gear software menu under the app’s Settings tab. If the app says you’re on the latest version, try again after a little while as the update may take a while to reach all regions. 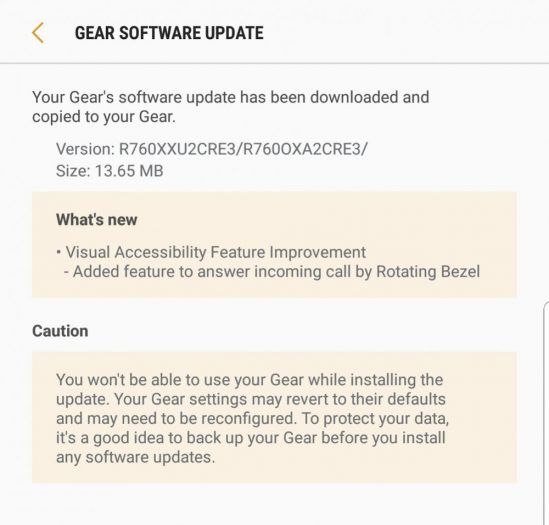 More news »
Official Galaxy Watch Active watch faces released for older smartwatches By Abhijeet M.|9 months ago
New Gear S3 update disables automatic alarm sync with smartphone By Abhijeet M.|9 months ago
One UI update out for the Galaxy Watch, Gear S3 and Gear Sport By Adnan F.|11 months ago
[Update: Gear Sport too] Gear S3 gets a big update with a host of new features By Sumit Adhikari|1 year ago
SamMobile TVMore »
Opinions More »
Samsung fans have had it with the company’s Exynos processors
6 days ago