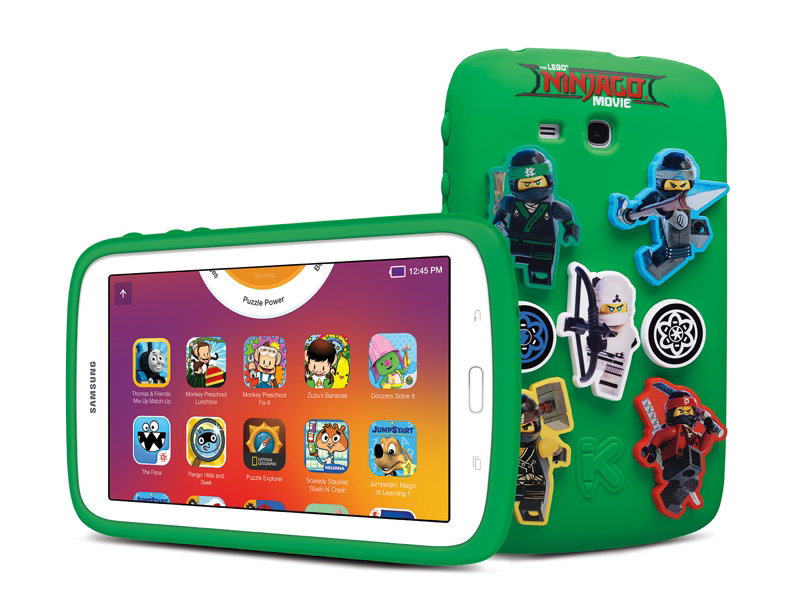 Samsung has teamed up with Lego to release a ruggedized Galaxy Kids Tab. The slate, which is aimed at infants, comes complete with branding from the entertainment giant’s latest animated movie, Ninjago, as well as Samsung’s Kids Suite.

Under the hood, the Galaxy Kids Tab 7.0 Lego Ninjago Movie Edition (try saying that after a night on the town) sports a 7-inch display, a 1.3GHz quad-core processor, 1GB of RAM, 8GB of expandable internal memory and a 3,600mAh battery.

We know, we know. The slate isn’t going to win any awards for its internals—but it doesn’t need to. It’s designed for children who need something to keep them entertained, not a businessman who needs umpteen applications running at once.

Neither Lego or Samsung have provided any details surrounding availability. All we know is that the Galaxy Kids Tab 7.0 Lego Ninjago Movie Edition will cost $149.99 when it hits the shelves in the United States later this year.

Galaxy Tab 3 Kids is a trendy looking tablet for kids

Barely 24 hours after we got wind of Samsung’s tablet for kids, the Korean company has announced the device. Galaxy Tab 3 Kids aims to make learning more fun with features tailored for kids. While the tablet is essentially Galaxy Tab 3 7.0 when it comes to hardware, the Galaxy Tab 3 Kids is pre-loaded […]

Samsung’s Galaxy Tab 3 8.0 has now made a stop in its hometown – South Korea. Samsung says the tablet is portable enough while giving a large screen experience and comfortable to hold in one hand, thanks to its 7.4mm thickness, 314g weight and slim bezel. Samsung will sell Wi-Fi-only Galaxy Tab 3 8.0 for […]