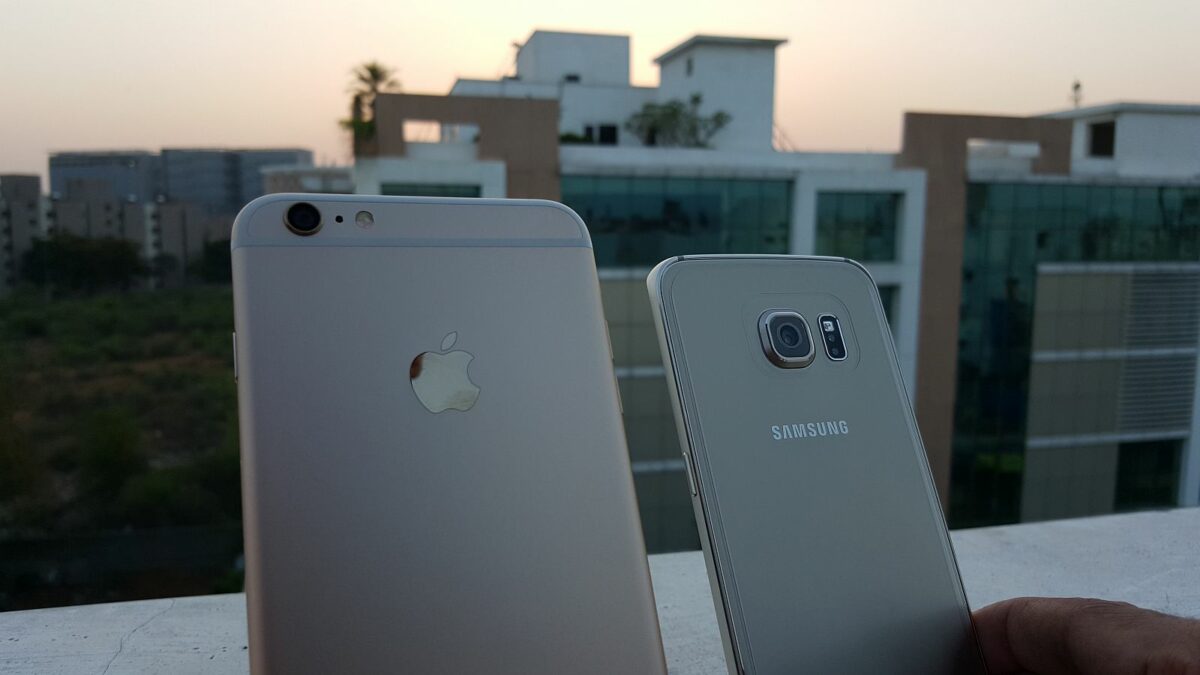 For years, Samsung smartphones have held the crown for the best that Android can offer, often defeating many other competitors in the Android space and going neck-to-neck with the iPhone. However, experts still used to mock Samsung for its decision of sticking to non-metal and utilitarian designs. Now, Samsung is back with a vengeance, and many experts have rated its recently released flagship smartphones, the Galaxy S6 and the Galaxy S6 edge, better than the current-generation iPhones.

In addition to its design, the Galaxy S6 has a lot going for it when it comes to reasons why it is better than Apple’s competing flagship. We decided to round up ten things that iPhone 6 owners are missing out on compared to those rocking the Galaxy S6, so join us after the break!

#1 Amazing selfies with the front-facing camera

On the other hand, the Galaxy S6 features a 5-megapixel front-facing camera with a wide-angle lens and an aperture of F/1.9, letting you fit more people and light inside an image. There are multiple shooting modes (beauty selfie, rear-cam selfie, etc.); not only that, there is also a mode which lets you capture images from both the cameras at once, complete with multiple layouts. The Galaxy S6 can also capture QHD (2560 x 1440 pixels) videos using the front-facing camera, which is higher than what many smartphones can manage with their rear-facing primary cameras.

#2 Record videos in 4K, with object-tracking autofocus and OIS

Camera resolution isn’t a way to measure camera quality, but 8-megapixels isn’t going to cut it anymore, especially after the arrival of high-resolution 4K televisions and monitors. Both the iPhone 6 and Galaxy S6 come with phase-detection autofocus, but the iPhone 6 lacks OIS (optical image stabilization), which results in grainy images in low-light conditions.

OIS helps the camera in keeping the shutter open for longer than usual without letting shake creep in, resulting in sharper images under low-light conditions. While recording videos, OIS helps in compensating shakes caused by a user’s hands for smoother videos. The Galaxy S6 makes full use of OIS (it works with both still image and video recording), and Samsung has also baked object tracking autofocus right into its greatest smartphone offering yet, making it easier to capture moving objects, especially subjects like kids and pets. Its camera was recently tested against the best in the industry, and it came out with flying colours.

#3 Measure your heartbeat, SpO2 and stress levels on the go

If you don’t have a heart-rate monitor handy, the Galaxy S6 can help. It can double up as an all-in-one health monitoring and fitness tracking device. It comes equipped with a heart-rate monitor, SpO2 sensor, and Samsung’s S Health app out-of-the-box, letting you measure heart-rate, SpO2, stress levels, steps taken, and even your sleep pattern. You can also track your food intake, and all of this can be done without spending a dime on third-party apps.

#4 Control your TV & other home appliances

The Galaxy S6 comes with an IR Blaster, just like its predecessors, so you can control a TV, DVD player, DVR, Set-Top Box, and even an air conditioner in your home or office. The Peel Smart Remote app, which comes pre-installed on the Galaxy S6, intelligently showcases all the channels and current shows so that you can better know what’s currently being telecasted on your favorite TV channel. It can even control DVD players, Blu-ray players, AV receivers, and streaming media players like Apple TV, Roku, WD TV Live and the likes. Handy, especially when your actual remote goes into hiding inside your sofa.

#5 Customize your device truly to your liking

Unlike the iPhone and other iOS-based devices, Samsung’s TouchWiz comes with the ability to let you make your device truly yours. With the inclusion of themes, Samsung has taken customizability to the next level. In addition to wallpapers and ringtones, themes on the S6 can change icons, fonts, colour accents; furthermore, inbuilt apps like the dialer or messages app change according to the themes as well. Also, you can edit and re-arrange the quick setting toggles according to your liking, something Apple doesn’t allow on iOS.

#6 Change display and sound modes to adapt with surroundings

Super AMOLED displays have always been more colorful and, er, contrast-ier than their LCD counterparts, but they haven’t always been as bright. However, thanks to a change in manufacturing materials, the Quad HD Super AMOLED display on the Galaxy S6 is brighter than many LCD displays, making it the best smartphone display ever. DisplayMate, an expert in display calibration tools, has tested and declared the Galaxy S6 as having the best mobile display on the planet.

Samsung’s Adapt Sound feature helps in finding the best sound level for each user, after a thorough test. Other features include Equaliser with Bass/Treble and Instrument/Vocal settings as well as Play Speed and Music Auto Off.

You can hide images in the iPhone, but they’ll still be visible in the albums, which is rather funny and totally destroys the idea of someone wanting to hide their content. On the Galaxy S6, you get Private Mode (also available on other Samsung devices), where you can store crucial as well as private information. This can be activated or deactivated with a quick setting toggle, but since it is guarded by your fingerprint, you can be sure that your sensitive information will always be secured from prying eyes.

#8 Pin apps to the screen

You’ve forgotten to move your sensitive information to the Private Mode, but someone needs quick access to your phone. Now what? You can use the Pin window feature to lock your device to a particular app, and hand it over. They won’t be able get out of the pinned app without pressing a button combo, or even without authenticating on the fingerprint sensor if you choose to use that security measure. It is also useful when you want to hand over your phone to kids so that your data remains safe from being accidentally deleted. This feature is present in all Android 5.0 devices, but compared to the iPhone 6, the Galaxy S6 certainly has an edge when it comes to data privacy and convenience.

#9 Fully charge the battery within 80 minutes

Some die-hard Samsung fans were furious about the exclusion of a removable battery and SD card slot from the Galaxy S6, but it was something Samsung had to do to come up with an eye-catching design. Even though it is no longer possible to hot-swap batteries, Samsung has at least made it easier for users to quickly charge their device when compared to the competition. Quite a few smartphones out there come with quick charging support, but the Galaxy S6 goes from zero to full in just 80 minutes, making it one of the fastest charging smartphones of recent times.

It’s not like most users will use all of the features listed above, but it’s pretty clear that there are quite a few areas in which the iPhone 6 falls behind the Galaxy S6 (and the Galaxy S6 edge.) Add to that the fact that Samsung has finally fixed things that its phones have traditionally been weak at compared to the iPhone, like software optimization and design, and it becomes a no-brainer that the Galaxy S6 should be at the top of your list if you’re out in the market for a flagship smartphone.