Samsung introduced the Exynos 9825 SoC in August 2019 to rectify a major shortcoming of the Exynos 9820, the processor that shipped with the Galaxy S10. The Exynos 9820 was manufactured on the 8nm LPP process node from Samsung and since the company kept the split between Exynos and Snapdragon processors for its flagship models, this meant that customers in select markets got the superior 7nm-based Snapdragon 855.

This process technology disadvantage meant that the Exynos 9820 was nearly not as power-efficient as the Snapdragon 855. Furthermore, it had a larger 127mm² die area, meaning that it was a significantly larger chip compared to the Qualcomm’s 73mm² chip.

It also retained the significant change Samsung made to the CPU configuration with the Exynos 9820 which moved from a 4+4 setup to a tri-cluster 2+2+4 setup. The top cluster had two custom Samsung CPUs, aided by two Cortex-75 mid-tier performance cores and four Cortex-A55 cores for power efficiency.

Samsung’s 2019 mid-cycle premium Exynos refresh has support for LPDDR4X memory. The 4x 16-bit CH LPDDR4X @ 2093MHz memory controller is exactly the same as the one in the Exynos 9820. Up to 12GB of LPDDR4x RAM is available on smartphones that utilize this processor.

The Exynos 9825 has support for up to five sensors. It can support a combination of 22MP rear and 22MP front cameras in addition to a 16MP + 16MP dual-camera setup at the back. An advanced image signal processor is included for multi-camera solutions.

Samsung kept the Shannon 5000 as the integrated modem for this SoC. This Category 20/13 LTE-Advanced Pro modem touts peak a download rate of 2Gbps with 8x carrier aggregation with max upload speeds of 316Mbps.

The Exynos 9825 doesn’t have an integrated 5G modem but can be paired with one. Samsung’s 5G Exynos Modem 5100 was coupled with the SoC on 5G variants of the Galaxy Note 10 and Galaxy Note 10+ to enable support for the next-gen network standard.

A separate neural processing unit is present onboard. Samsung claims it’s capable of performing artificial intelligence tasks around seven times faster than the processor. The NPU allows for AI tasks to be processed on-device so as to increase performance and provide more security for personal information. The NPU enables the device to offer enhanced camera and augmented reality functions.

Benchmarks are the most commonly used yardstick to judge how much better a new chip is compared to its predecessor. That’s why there’s always so much hype around benchmarks for mobile chips, even though they are never really representative of real-world performance.

Benchmark apps run a standard workload on all devices to keep consistency in the test. Various aspects of the device such as CPU, GPU, memory and more are then tested to see how it performs compared to other devices. Benchmark results are great for looking at percentage gains in performance. All of the following benchmarks and leaderboards are accurate as of April 2020. 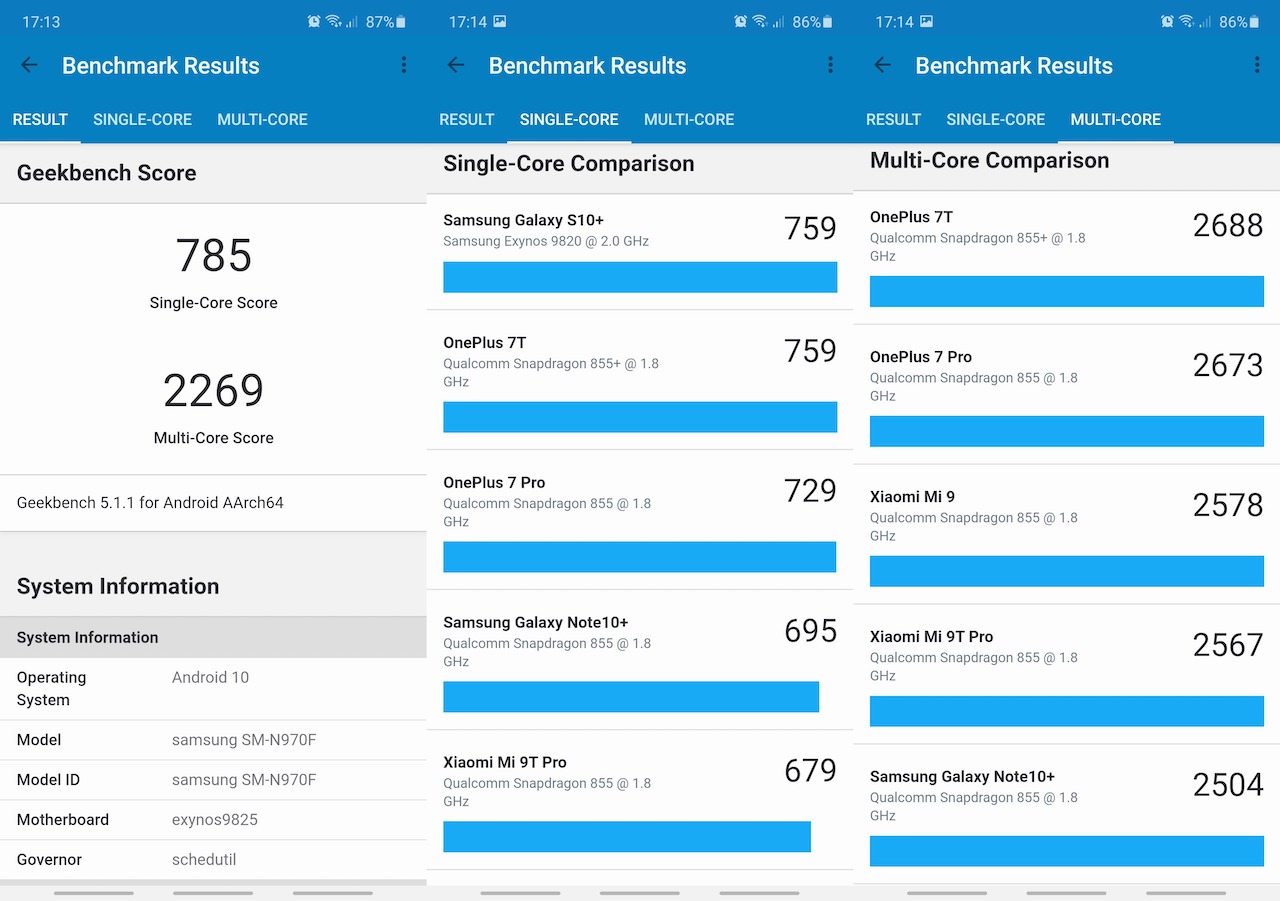 Geekbench is a popular benchmark for measuring the single-core and multi-core performance of mobile chips. The Exynos 9825 in our Galaxy Note 10 with 8GB RAM posted single and multi-core scores of 785 and 2269 respectively. 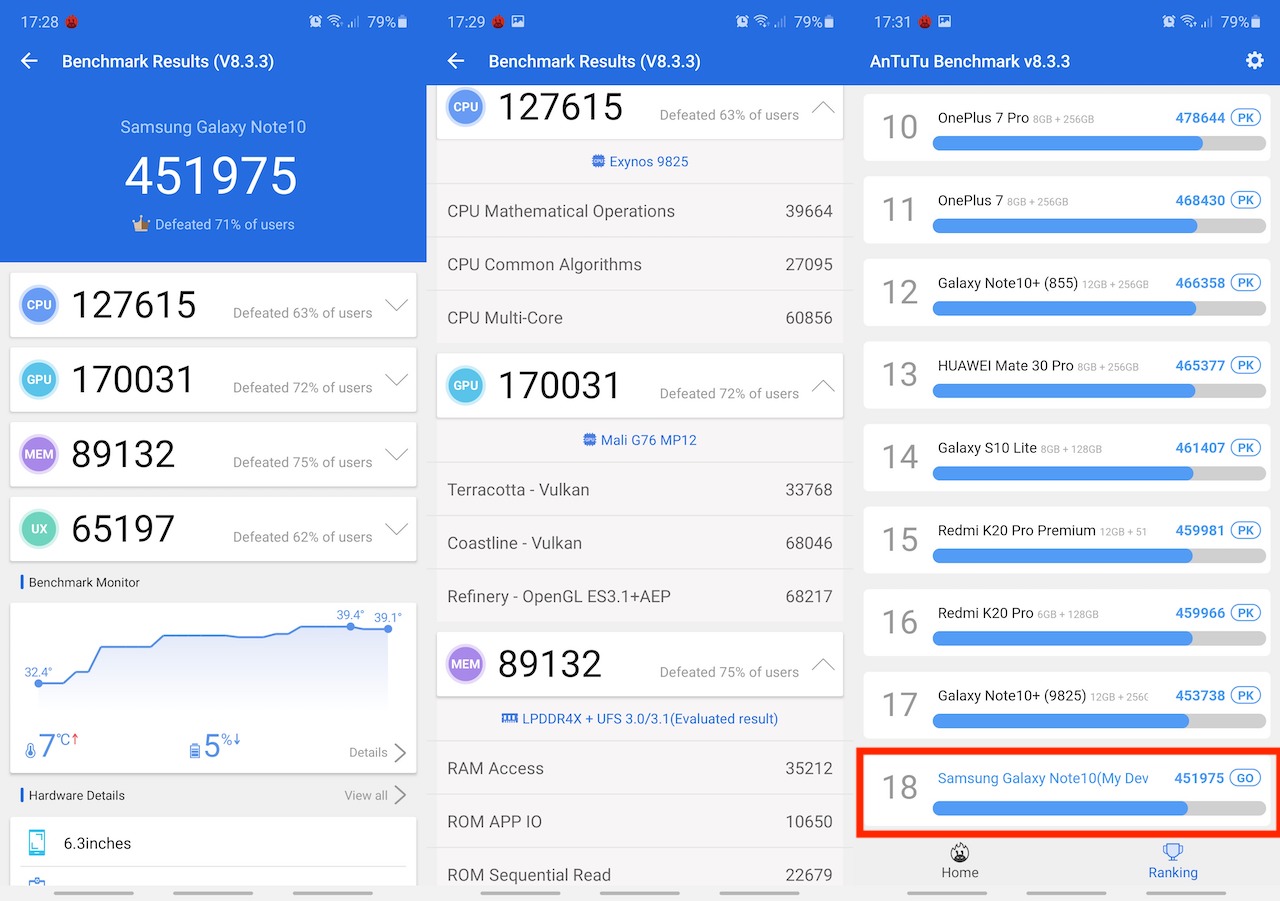 AnTuTu runs multiple tests and assigns an overall score and individual score for each of them. Our unit scored 451975 overall, landing on the 18th spot in the leaderboard. 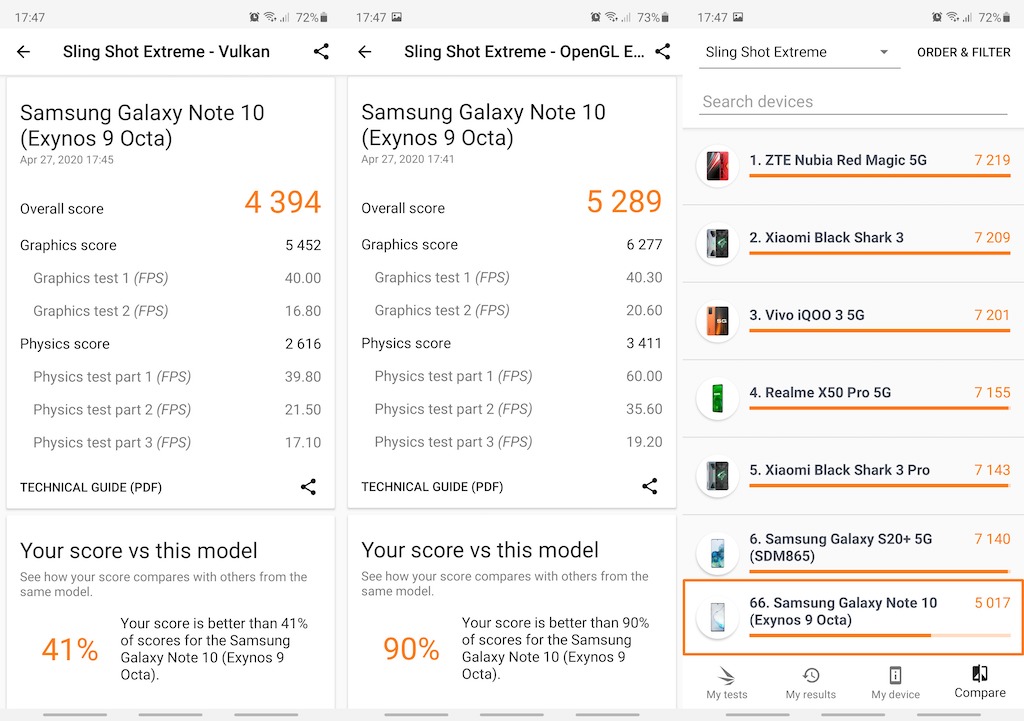 For measuring GPU and CPU performance with Vulkan and OpenGL ES benchmarks, 3DMark is widely used. Its workload includes instanced rendering, volumetric lighting and depth of field. The Exynos 9825 in our unit scored 6822 overall on Sling Shot Extreme.

The following Samsung Galaxy smartphones use the Exynos 9825 processor: