Paying your taxi fare in Dubai just got a lot easier. You can now use Samsung Pay in Dubai to settle your fare as taxis are now capable of accepting this payment method. Samsung Pay was originally launched in the United Arab Emirates in April last year, allowing users in the country to make payments on the go effortlessly using their smartphones.

Use Samsung Pay in Dubai to pay taxi fare

The United Arab Emirates became the first country in the Middle East to welcome Samsung’s mobile payments service last year. The service utilizes Magnetic Secure Transmission technology and Near Field Communication to replicate a card swipe, thus enabling merchants to accept Samsung Pay even if they don’t have any special terminals. They can simply use their existing card machines.

Samsung Pay was supported by major UAE banks at launch, including HSBC, Emirates NBD, ADCB, Mashreq, National Bank of Abu Dhabi, Standard Chartered and others. Samsung also partnered with major payment networks such as Visa and Mastercard to ensure that the service was available to more consumers in this market.

The Dubai Roads and Transport Authority (RTA) is now allowing the use of smartphones to pay for taxi fares in the emirate. Network International, the company that providers POS services to RTA, has enabled this functionality in Dubai taxis. More than 8,000 taxis in the emirate will now allow passengers to use Samsung Pay in Dubai to settle their fares.

“The service is aimed to offer taxi riders smooth payment options that raise their satisfaction and happiness,” said RTA Public Transport Agency’s CEO Ahmad Hashim Behroozian. He added that this is part of the government’s Smart City initiative. 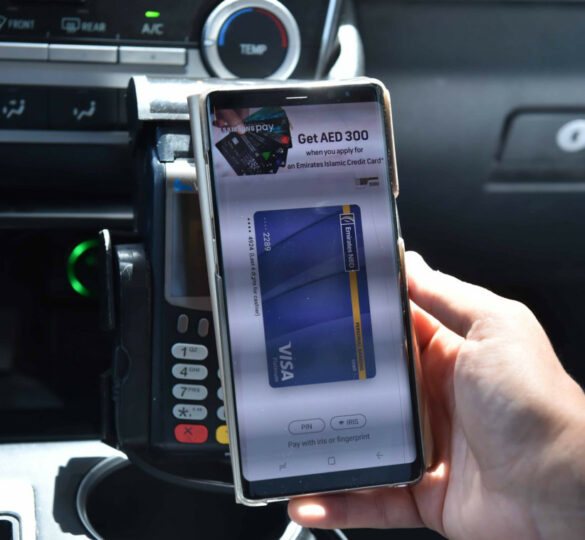