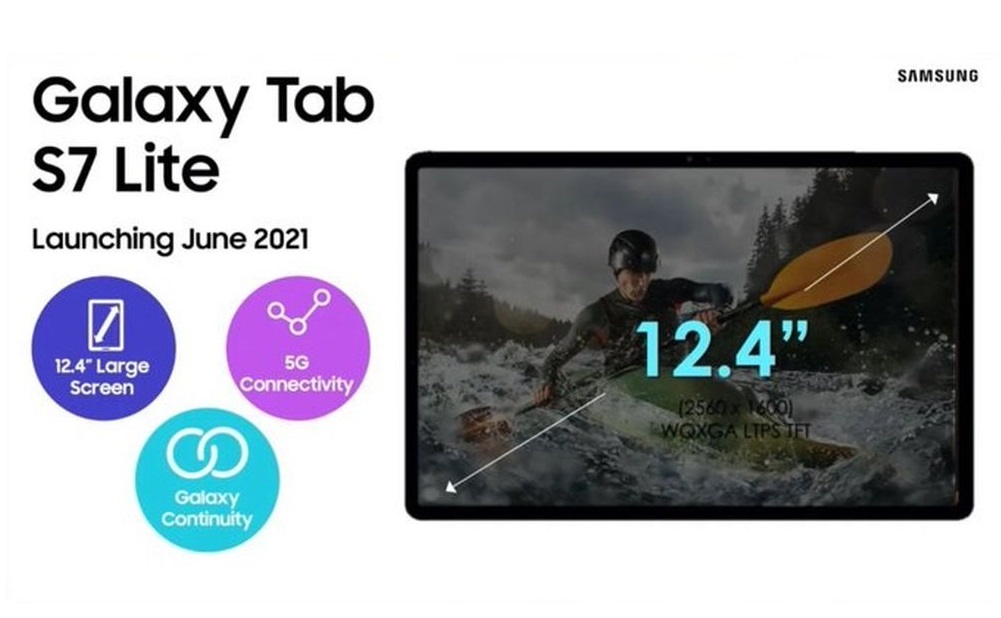 Last month we came across evidence suggesting that Samsung is developing a new tablet which could be introduced as the Galaxy Tab S7 Lite. It turns out that this might not be the only new Lite-branded tablet in the works, as a so-called Galaxy Tab A7 Lite could also be planned for release later this year.

Both the Galaxy Tab S7 Lite and the Galaxy Tab A7 Lite were spotted in a couple of renders that were shared by @_h0x0d_ via Twitter. They’re seemingly a small portion of Samsung’s marketing material for the devices and highlight a few key features for each tablet model.

According to these renders, the best selling points of the Galaxy Tab A7 Lite are the 8.7-inch display and relatively compact form factor that allows for one hand operation, the slim metal design, and the immersive entertainment that the tablet can provide. In other words, the Galaxy Tab A7 Lite is shaping up to be an affordable multimedia tablet.

Meanwhile, the Galaxy Tab S7 Lite is aimed at the productivity crowd. It boasts 5G connectivity, a 12.4-inch LTPS TFT display with a resolution of 2560 by 1600, and it benefits from One UI 3.1 features such as the Extended Mode (Galaxy Continuity) which transforms the tablet into a secondary screen and allows users to seamlessly move opened apps between it and a Galaxy phone.

The final piece of information revealed by the renders suggests that both the Galaxy Tab S7 Lite and the Galaxy Tab A7 Lite are planned for an official launch in June, which could mean that they’ll hit the shelves later the same month or in July.

Pricing details are unknown but both tablets will obviously launch for lower prices than their existing non-Lite counterparts. The Galaxy Tab S7 Lite is poised to become Samsung’s most affordable 5G-enabled tablet yet.

Samsung has launched a new kids-friendly tablet—Galaxy Tab A7 Lite Kids Edition—in Russia. It is a success …

Samsung had unveiled two new tablets—Galaxy Tab A7 Lite and Galaxy Tab S7 FE—last month, and they are alre …