It’s not uncommon for carriers in the United States to entice customers with offers on flagship smartphones. Verizon appears to be gearing up to do the same in the near future. Customers who pre-order Galaxy Note 9 from Verizon will have the opportunity to take advantage of a BOGO or buy-one-get-one deal.

This has been revealed through the My Verizon app. The app has lifted the curtain on this promotion which will see the carrier offering the second unit for free to customers who pre-order the Galaxy Note 9.

It’s always best to go through the fine print of such offers as there are certain conditions that customers should be aware of before they opt for the offer. Verizon’s Buy One Get One promotion for the Galaxy Note 9 will be available once pre-orders go live. That’s expected to happen later this week after Samsung unveils the Galaxy Note 9 on August 9.

While the app has revealed this promotion, it doesn’t provide any pricing or release information. That’s obviously going to be confirmed after the official event but reports suggest that the Galaxy Note 9 will be released on August 24.

The way BOGO deals work is that customers get monthly bill credits equal to the cost of the second device. They usually have to add a new line to their plan and are liable to pay off the device if they decide to cancel service before the time is up, that’s usually 24 months.

That’s likely how this BOGO deal will work for those who pre-order Galaxy Note 9 from Verizon. The carrier will provide more information about the deal once the handset is official. There may be other incentives for pre-order customers as well. They might include a Value Pack with a $299 pair of wireless noise-canceling headphones from AKG and $150 worth of in-game currency for Fortnite. 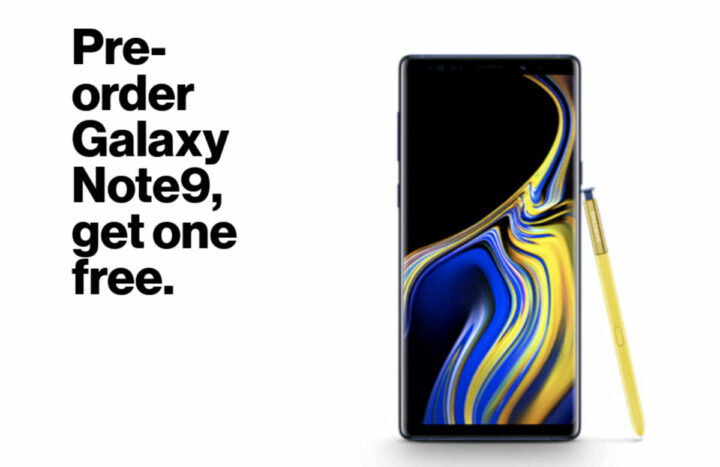 More news »
Sprint’s Galaxy Note 9 now being updated to One UI 2.1 By Abhijeet M.|4 days ago
T-Mobile starts pushing out One UI 2.1 to Galaxy Note 9 owners By Dominik B.|5 days ago
Galaxy S9, Note 9 got One UI 2.1 in dozens of markets, more to follow By Mihai M.|1 week ago
More users are facing green tint display issues on different Galaxy devices By Mihai M.|2 weeks ago
SamMobile Shop
Opinions More »
Galaxy S20’s 120Hz display has spoiled me as a Samsung phone reviewer
10 hours ago