It was first reported about a month ago that Samsung appears to have a new handset in the pipeline which has a design similar to the Galaxy S8 with mid-range specifications. It was then referred to as the Galaxy S8 Lite even though there was no indication that Samsung would actually call this smartphone that. The company has now sent out invites to the press in China for an event later today and that invite reveals that this device will actually be called the Galaxy S Light Luxury.

Countless renders of the so-called Galaxy S8 Lite have been leaked online over the past couple of weeks. The design is quite similar to the Galaxy S8 and it features a 5.8-inch FHD+ Infinity Display. It even has the physical Bixby button that Samsung introduced with the Galaxy S8 last year.

The design similarities continue at the back where the fingerprint sensor is placed alongside the camera. You’ll notice that it doesn’t have a heart rate sensor at the other side of the camera sensor and that’s because it’s not meant to be a flagship device.

Previous reports have also revealed that this handset will be powered by the Qualcomm Snapdragon 660 processor with 4GB of RAM and 64GB of storage. It will feature a 16-megapixel rear and 8-megapixel front camera, a 3,000mAh battery and it will ship with Android 8.0 Oreo.

Samsung has invited 100 people for the launch event at its Jingdong headquarters in Beijing today. The event invite has reportedly revealed this device’s moniker and it will be launched as the Galaxy S Light Luxury.

It’s unclear how much Samsung is going to sell this device for in the country but it will be available in black and burgundy red colors, the latter quickly becoming the color of choice for many Samsung fans.

For all intents and purposes, though, this mid-range handset appears to be limited to China so it would be best not to keep your fingers crossed for a global launch of this smartphone. 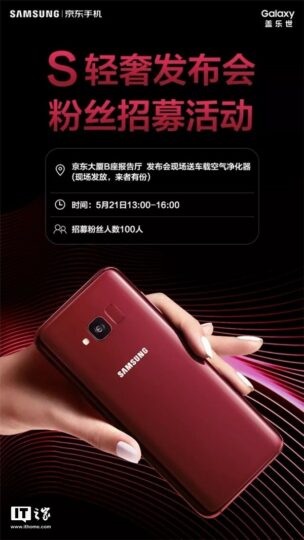