Harman audio is coming to Samsung’s Galaxy devices in 2018

Samsung lapped up Harman International a few days ago for $8 billion. Even though Samsung’s focus with this acquisition was connected automobiles, many were wondering if the South Korean smartphone giant would use Harman’s audio prowess in its smartphones. Now, it is being reported that Samsung is actually considering it.

According to a report from TheInvestor, the chief of Samsung’s automotive division, Park Jong-hwan, hinted that Samsung’s Galaxy S series of smartphones could use audio solutions developed by Harman in 2018. This comment was made when the company held a press conference regarding the acquisition in Seoul, South Korea on November 21. Harman CEO Dinesh Paliwal and Samsung Chief Strategy Officer Young Sohn also attended the event.

“It will take time for the acquisition process to be completed, including the planned shareholders’ vote. After that, we could ramp up efforts for business synergies. If we are to adopt Harman’s high-end audio technology for the Galaxy S series phone, the first model could come in 2018,” said Park Jong-hwan, senior vice president and head of Samsung’s car parts division.

The company also confirmed that it has no plans to make its own cars and that it is only interested in the connected car solutions in the era of IoT (Internet of Things). Mr. Park also confirmed that Harman would remain an independent firm going forward. Samsung had been struggling to make partnerships with auto makers, but Harman’s acquisition should ease its struggle by quite a lot. 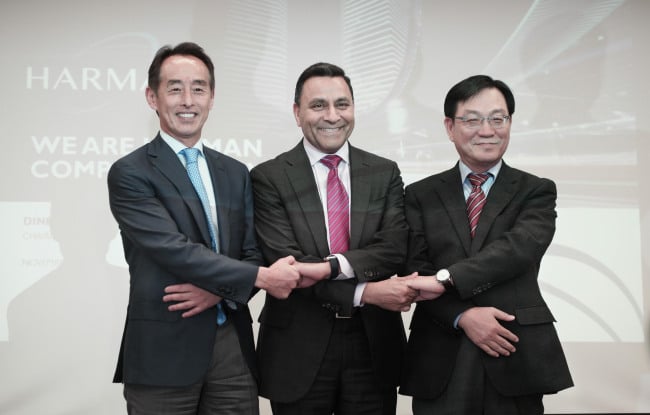