The Galaxy M01 Core can be easily described as a mirror image of the Galaxy A01 Core. The M-series budget phone shares many design and hardware similarities with its Galaxy A-labeled sibling, and you’d be hard-pressed to find any differences between the two models.

However, unlike with the Galaxy A01 Core, Samsung clearly states that the Galaxy M01 Core does not have a user-removable battery. It was also announced with more than a single memory configuration.

Samsung’s budget Galaxy M01 Core is wrapped in a polycarbonate case featuring diagonal grooves on the back panel. Customers can pick from three color options including black, blue, and red.

The phone has a non-Infinity display, meaning it doesn’t have a full-screen design. Instead, the Galaxy M01 Core has prominent top and bottom bezels that look rather unusual in the 2020 smartphone landscape. 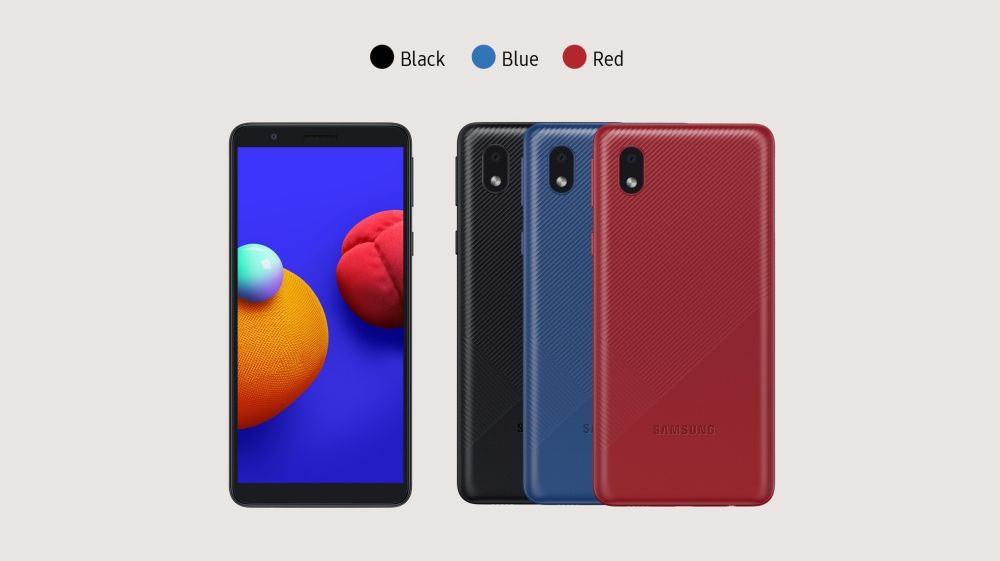 The Galaxy M01 Core carries its physical buttons on the right edge. Connectors such as the microUSB port and 3.5mm headphone jack are found at the bottom, and the phone measures 141.7 x 67.5 x 8.6mm while tipping the scales at 150 grams.

The Galaxy M01 core is another Samsung budget phone powered by the MediaTek MT6739 quad-core mobile processor. The AP operates at a maximum frequency of 1.5Ghz and it’s paired with either 1GB of RAM and 16GB of storage, or 2GB of RAM and 32GB of built-in memory. In both cases, storage is expandable by up to 512GB via a dedicated microSD slot.

The phone has dual-SIM capabilities and it benefits from connectivity features such as 4G LTE, Wi-Fi 802.11 b/g/n, Bluetooth 5.0, GPS, and Glonass. At the core of the phone you’ll find a 3,000mAh non-removable battery rated (by Samsung) for up to 14 hours of internet usage time and 11 hours of video playback.

The Galaxy M01 Core has a modest display with a relatively small 5.3-inch diagonal. It’s based on PLS TFT LCD technology and it has a resolution of 1480 by 720 pixels.

There’s not much else to say about the panel, except for the fact that it’s completely flat and doesn’t have any notches or cutouts.

The Galaxy M01 Core is one of Samsung’s very few 2020 smartphones to have a single rear-facing camera. The said module has a resolution of 8-megapixels and an f/2.2 aperture. It’s accompanied by an LED flash and it’s capable of recording 1920 x 1080 FHD videos at 30 frames per second. 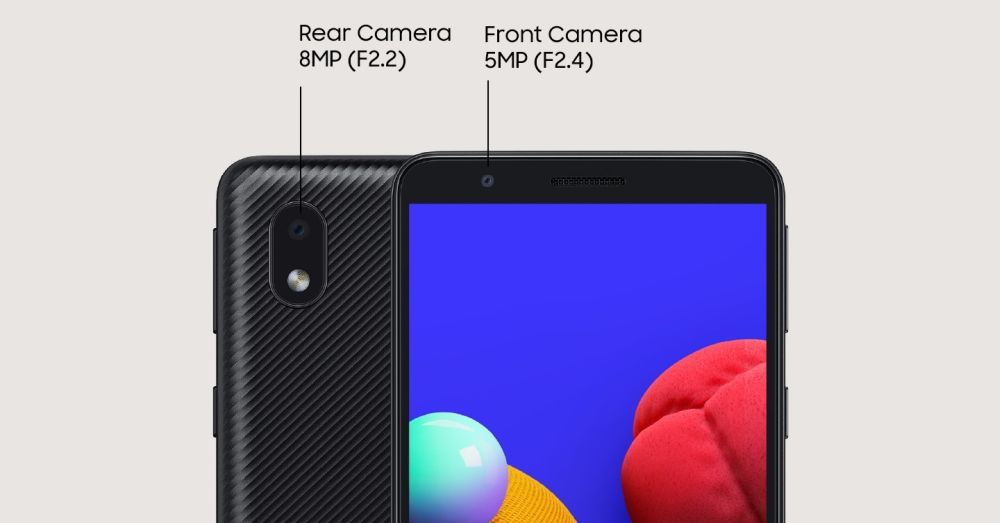 On the opposite side, the front-facing camera is embedded in the upper bezel next to the speaker. It has a 5MP resolution and an f/2.4 aperture.

Samsung is shipping the Galaxy M01 Core with Android 10 Go Edition out of the box. It’s the best software it can get considering the meagre specifications. With that being said, there aren’t many outstanding features to be had with the Galaxy M01 Core.

It can run simplified mobile apps with ease, especially since it ships with the ‘Inteligent’ UX ‘Made for India’ that has been designed for customers who lack experience with smartphones. However, this also means that higher-end One UI software features that complement other, more expensive Galaxy devices are missing.

Samsung fans and SamMobile readers have access to various Samsung resources for free. You can download Samsung firmware, APK, and official wallpapers from our website. You can improve your experience further with access to faster downloads, ad-free browsing, giveaways and more by choosing one of our premium plans.