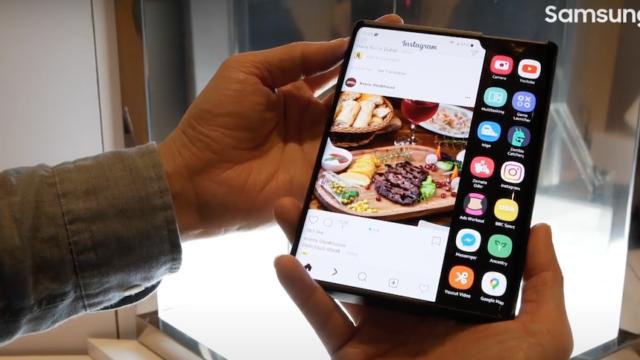 Even though a lot of major companies pulled out of the Consumer Electronics Show 2022 in Las Vegas, we’re glad that Samsung’s out here in full force. Samsung Display always shows off some of its incredible achievements at the world’s largest tech trade show and it came to impress this year.

Samsung Display has showcased some of its new creations that highlight its vision for the future of OLED. Since its panels find their way into Samsung’s phones, the new stuff it has shown off today certainly gets us excited for the future.

Samsung Display showed off its Flex Slidable OLED display technology during a showcase at the CES 2022 today. We were thrilled to check it out in person. This is Samsung’s horizontally slidable technology concept.

A prototype device with the Flex Slidable panel was shown in action. It looks like a regular phone until what appears to be a discrete switch on the frame is pressed. That’s what makes the panel slide out, allowing users to enjoy the flexibility of a broader screen depending on the content they’re consuming.

It’s an interesting concept and one that Samsung has been working on for quite some time. Patents related to smartphones with sliding displays have been around for years. It was great to see an improved iteration of this technology in action at CES 2022.

There’s no saying if and when this technology will find its way inside Samsung smartphones. One can only hope that it does. Samsung’s success with foldable smartphones should give it confidence that the market is ready to adopt the next-generation of display technology.