The United States Patent and Trademark Office (USPTO) published a patent filing from Samsung earlier this month, hinting at the company’s continued interest in developing its own smart glasses. First spotted by Patently Apple, the newly published patent document shows a pair of fairly standard design glasses which, apparently, are foldable. Samsung had filed a logo trademark for smart glasses last year. The latest patent was filed with the USPTO in January this year, and in Korea a year earlier.

Samsung’s first attempt at augmented reality smart glasses could see it launch a pair of foldable ones in the future. The eyepiece would automatically switch off whenever it’s folded. Samsung may use magnetic sensors to make sure that it maintains its unfolded position until the user deliberately folds it.

According to the patent documentation, Samsung’s smart glasses will come with a tiny projector mounted on the temple. The projector would beam images in front of the wearer, though it doesn’t explain as to what information the glasses would show. The frame will accommodate most of its electronic components. They may include a camera, a gesture sensor, and various other sensors. The filing also mentions an ARM processor and a SIM.

As always with a patent application, there’s no guarantee that this particular device will see the light of day. And since it’s a utility patent, the end product, if Samsung eventually launches one, may sport a completely different design. 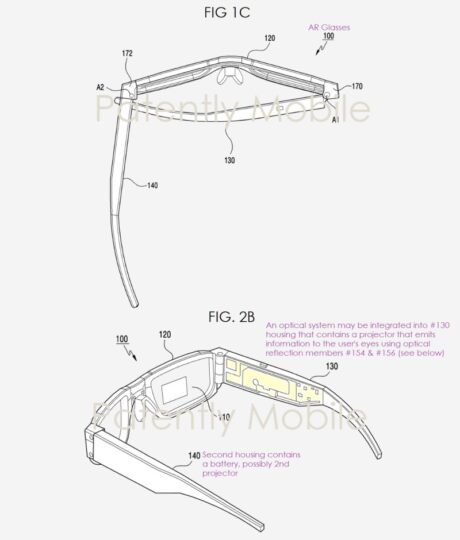