Galaxy Z Fold 3 may have three displays, the new one being on its hinge

The Galaxy Z Fold 3 may feature no fewer than three separate displays, as Samsung appears to be considering adding yet another, even smaller screen to the template used for the Galaxy Z Fold 2. Earlier this month, the company finally secured a patent it filed to register a year and a half ago; one that essentially describes a Galaxy Z Fold 2 variant featuring a hinge display. The documentation, spotted and illustrated by Dutch outlet LetsGoDigital, specifically describes the hinge screen as an LED panel.

The type of display tech envisioned for the concept hence seems to revolve around battery efficiency, with the patent describing applications such as synchronized wallpapers “spilling” over the device and other such eye candy. 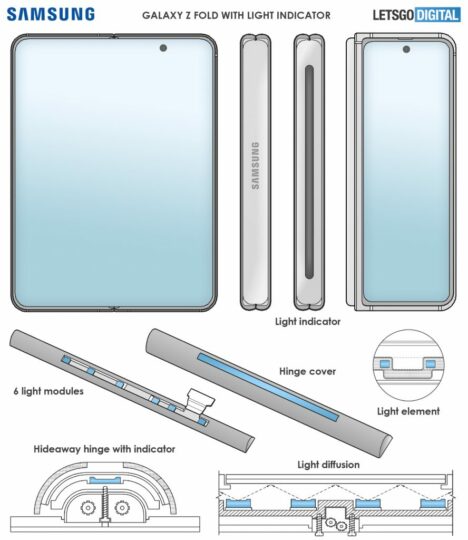 Is this the next step in Edge Display reversal?

The LED strip would get swallowed by the back side of the concept smartphone’s hinge when it’s used outfolded. And in terms of practical functionality, Samsung’s patent more or less describes another instance of Edge Display, for being separated from the main device screen.

Given how Samsung’s kind of running out of subtle degrees of curvature that it’s been shaving off its Edge Display tech for years now, it seems plausible we may be looking at a natural evolution of its curved smartphone displays. Also known as that thing pretty much all of us seem sick and tired of on modern Galaxy devices. You could argue this new concept just complicates an already immensely complex gadget, introducing yet another part of it that might fail, but it’s not like the first two generations of Samsung’s foldables treated the hinge as an afterthought. Quite the contrary.