Formula One is a hot topic here in the Netherlands thanks to Max Verstappen, which is probably why Samsung Benelux must have decided to jump onboard the F1 bandwagon and make a special case for the Galaxy S9 and Galaxy S9+ in association with Vodafone and the Red Bull Ring racing circuit in Spielberg, Austria. Enter the Galaxy S9 Red Bull Ring Racing Edition.

The Red Bull Ring Galaxy S9 cover comes in dark blue with a matte finish and a logo of the racing circuit on the back, which gives it a racier feeling than what just the Red Bull logo would have allowed, so it’s a good choice if you ask us. The case does manage to pick up too many fingerprints, though, so that’s one disadvantage when it comes to the look of the case. Of course, the case itself is not the main feature here. That’s the NFC chip inside the case; when put on the phone, the case changes the look of the software by applying an exclusive Red Bull Ring theme. Naturally, the theme is installed from the Theme Store the first time the case is used. As we had reported earlier, the Red Bull case might be the first of many custom cases that Samsung will allow theme designers to sell through the Theme Store, although details on that are currently limited. 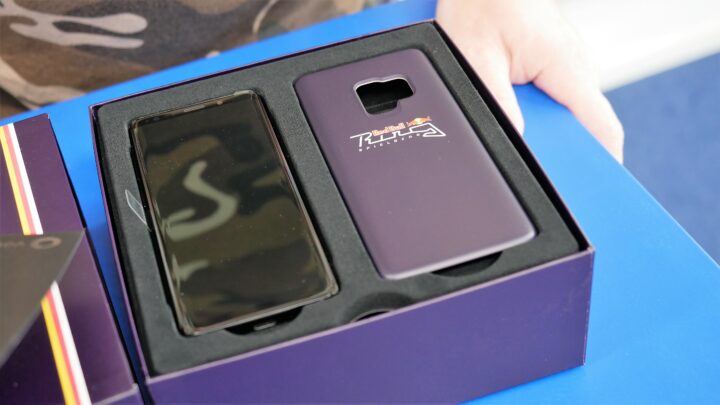 The first thing you will be welcomed by after the theme is applied is a lock screen screensaver of old Red Bull sponsored cars racing on the track. The lock screen feels a bit cheap, but the changing wallpapers make up for that. The lock screen also gets shortcuts to two F1 websites (F1today.net and racingnews365.nl) and an app called Racing Media, which isn’t finished at this time. The other app shortcut takes you to a gallery album containing beautiful, high-quality pictures of different F1 cars and drivers. 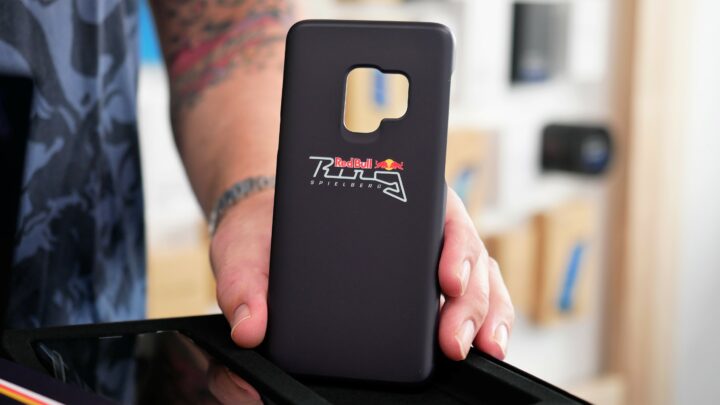 Over on the home screen, you’ll see a themed clock in blue, red, and white and an F1 wallpaper, of which a new one will be released every week. Samsung’s proprietary app icons also get themed and, basically, the entire OS gets a Red Bull makeover. The interface uses colors from the Red Bull logo, so you’ll see a lot of dark blue, red, and a little bit of yellow and white. You can also set the logo of the Red Bull Ring racetrack on the Always On Display screen. 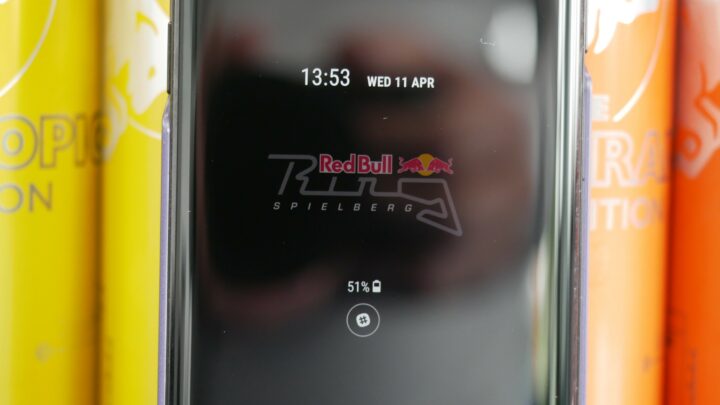 Since this isn’t just a regular theme, you also get new ringtones and notification sounds. For messages, you’ll hear the iconic whoosh of an F1 car racing past, and the ringtone switches to a song that suits the racing theme that flows throughout the Galaxy S9 Red Bull Ring Edition. Once you take the case off the phone, your previous theme gets applied, and you get an on-screen message that says “Goodbye Champ.” A cool detail, though we’re guessing it will become annoying if you tend to remove the case from your phone every now and then.

All in all, the Galaxy S9 Red Bull Ring Edition case is for those who want to go through the F1 season with cool features and content on their Galaxy S9 to really feel the Formula One fever. It’s also an indication of how custom cases that Samsung will one day sell through the Theme Store will work, and a nice extension of the extensive theming possible on the company’s Android smartphones.

Now for the good part: Samsung and Vodafone have given us two Galaxy S9 Red Bull Ring Edition packs (no S9+, unfortunately) and eight Red Bull Ring cases to give away to our readers. Unfortunately, the phones are provider-locked, so we can only give these out to our Dutch readers. The cases, however, can be won by everyone around the world.

What do you need to do to win one of these prizes? Just follow us on Twitter and tweet us a photo of yourself that shows that you’re a Red Bull F1 fan; also tell us what version of the case you want, as we have four Galaxy S9 cases and four Galaxy S9+ cases.

So start your engines, and good luck!

More news »
Galaxy Note 9 One UI 2.1 update will have these best Galaxy S20 features By Adnan F.|5 days ago
Galaxy Note 9, Galaxy S9 One UI 2.1 update ditches this cool feature By Adnan F.|5 days ago
A decade of Galaxy S camera improvements in one infographic By Mihai M.|6 days ago
Is the Galaxy A10e waterproof? No, but here’s your cheapest option By Mihai M.|1 week ago
SamMobile Shop
Opinions More »
Galaxy Note 20 might give you a reason to buy the Galaxy Fold 2 instead
7 mins ago