Galaxy S21 Object Eraser vs Photoshop: Does Samsung’s AI hold its own? 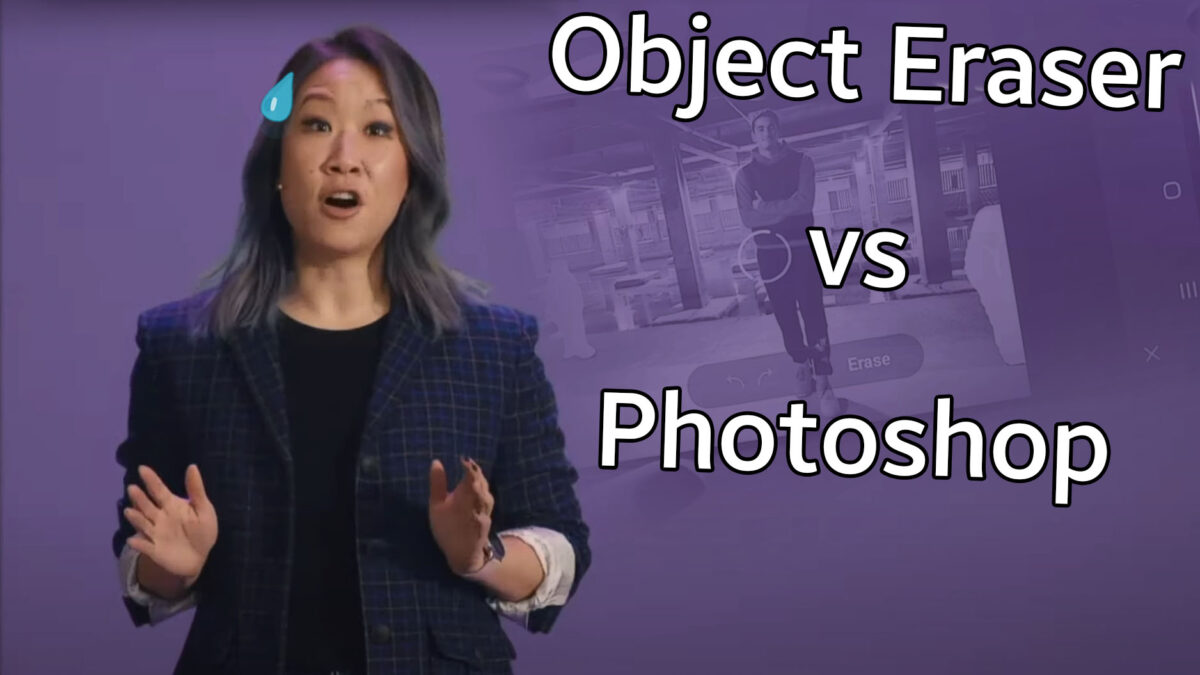 We just couldn’t help ourselves. So, here comes your first direct comparison of the Object Eraser feature launching with the Galaxy S21 series later this month and the Content-Aware Fill tool from Adobe Photoshop. The real Photoshop.

Not that we expected Samsung’s Object Eraser to be able to take on the latest desktop-grade Photoshop build immediately from version 1.0. Or v0.5, to be frank, seeing how we used a Galaxy S21 Ultra review unit running pre-release software. It’s just that experimenting with Object Eraser actually emboldened us to do some side-by-side edits. If only to see how far away Samsung currently is from the golden standard in AI-powered pixel removal. Can the Galaxy S21 keep up with the ultimate photo manipulation AI?

And while there’s no doubt that Object Eraser is a much more limited tool compared to the full power of the Adobe Sensei AI platform, it actually held its own against Content-Aware Fill quite remarkably. Naturally, we were only trying to compare their ability to perform minor raster graphics edits. Not even Photoshop is meant to tackle much more as of right now.

Overall, dare we say Object Eraser did more than well to keep up with an industry-leading photo manipulation AI. Especially given its high degree of autonomy: it only asks for help with making a selection, then proceeds to do its pixel disappearing act all on its own.

As is to be expected from professional image manipulation software, Content-Aware Fill offers much more granular control and can potentially deliver way more impressive results. Assuming you’re willing and able to lend it some of your gray matter, that is. 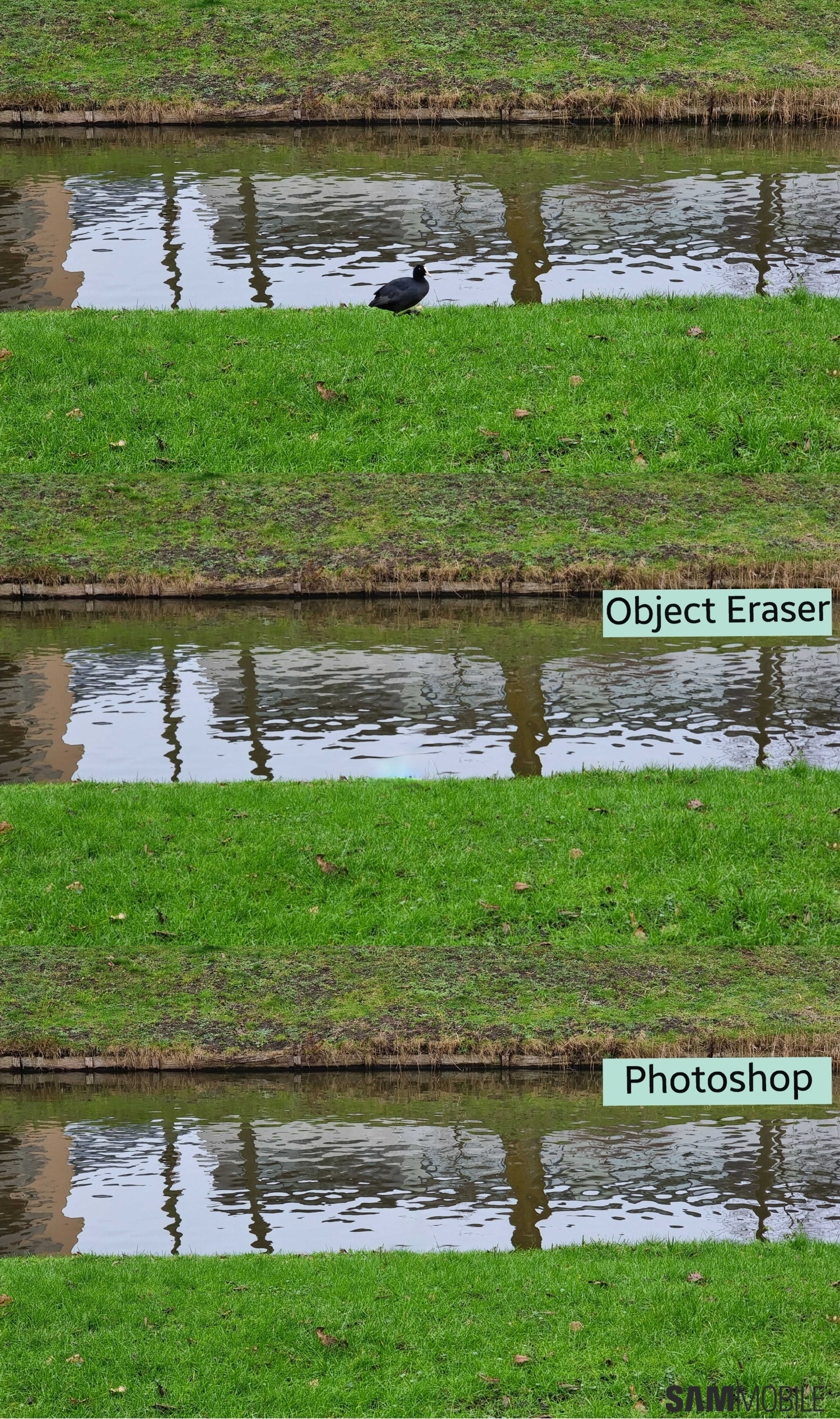 In order for this comparison to be even remotely fair, we decided to restrict ourselves to a single pass of Content-Aware Fill per image. After all, that’s precisely how big of a shot we gave to Object Eraser, and it stands to reason that one’s success rate with this type of tech largely depends on their ability to make accurate selections. We also refrained from manually adjusting Photoshop’s source pixels for much the same reasons, seeing how Object Eraser doesn’t take such input.

To that end, Samsung’s AI editor was mostly able to keep up with Photoshop in terms of understanding our selections. Its only major shortcoming was its ability to blend colors, as best demonstrated by the duck disappearing act above.

Granted, that’s a pretty important area to lag behind in. And it’s not like color science hasn’t already been solved in the field of machine learning by everyone from Google to FaceApp. So, Samsung hopefully won’t take long to get Object Eraser up to speed in that regard. 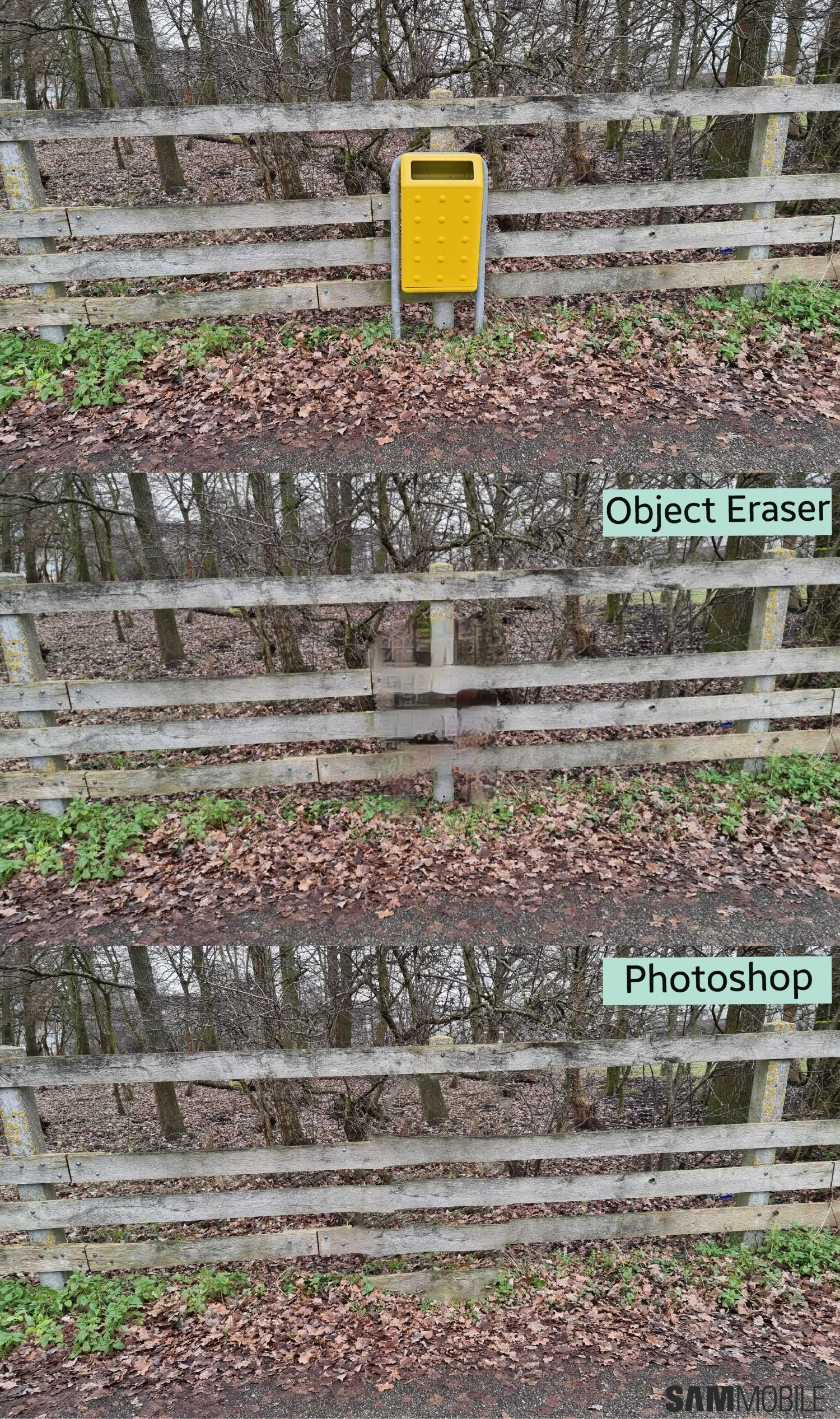 Introduced as the photobomber’s worst enemy just yesterday, Object Eraser will hit the market as part of Samsung’s Image Editor accessible from the stock Gallery app on January 29th. It’s not going to stay exclusive to the Galaxy S21 range for long, however.

Samsung hence already confirmed its plans to bring Object Eraser to as many of its devices as hardware (read: neural-processing potential) allows over the next year or so. As for when to expect the start of that wider deployment, the Photo Editor update containing this AI tool will either only target devices running One UI 3.0, or be bundled with Samsung’s Android 11-based firmware.