Galaxy A42 5G appears to be using the Snapdragon 750G processor The Galaxy A42 5G was unveiled earlier this month, but Samsung did not reveal its complete specifications. While its camera specs, screen size, and battery capacity were revealed, the South Korean firm was hesitant to let us know which processor is used inside its new smartphone, and we now know why.

The Galaxy A42 5G, which is priced at €369, sports a 6.6-inch Super AMOLED Infinity-U display with HD+ resolution. It has a 20MP selfie camera at the front and a quad-camera at the rear, featuring a 48MP wide-angle camera, an 8MP ultrawide camera, a 5MP depth sensor, and a 5MP macro camera. The phone features 4GB RAM, 128GB storage, and Android 10 with One UI. It is powered by a 5,000mAh battery and comes in three color variants: black, white, and gray. 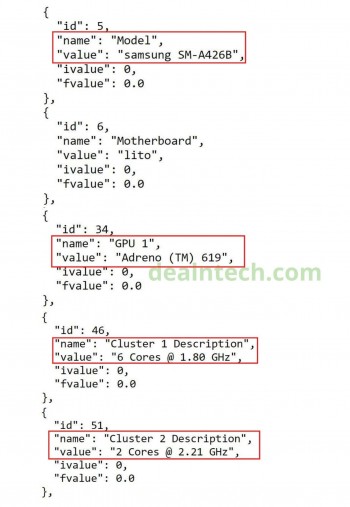