According to the data from Counterpoint Research, Galaxy S9+ was the bestselling smartphone globally in April. Its smaller sibling, the Galaxy S9, came in second, pushing Apple’s iPhone X to the third spot. Strong sales in Asia Pacific and North American markets reportedly helped the Galaxy S9 series to snatch the top rankings. Since April marks the first full month of the Galaxy S9 duo’s availability, it shouldn’t be surprising to see them dominate the sales charts.

Coming to the numbers, the report says the Galaxy S9 and S9+ accounted for 2.6% each of all global smartphone sales in April, occupying the first two spots (the report seems to be rounding off the percentages). The iPhone X and iPhone 8+ grabbed the next two spots with a market share of 2.3% each.

Xiaomi’s Redmi 5A and Redmi 5 Plus/Note 5 also made it to the bestsellers list with 1.5 percent and 1.4 percent market shares respectively. What makes Xiaomi’s performance impressive is that unlike Samsung and Apple, the company currently operates only in a select few markets and is still able to make a mark in the global sales rankings.

Apart from the current Galaxy flagships, last year’s Galaxy S8 is the only other Samsung device on the list. Overall, Apple dominates the bestsellers list with five models, followed by three devices from Samsung and two from Xiaomi.

Do remember, as with any other market reports, these findings may not be entirely accurate and thus shouldn’t be taken at face value. 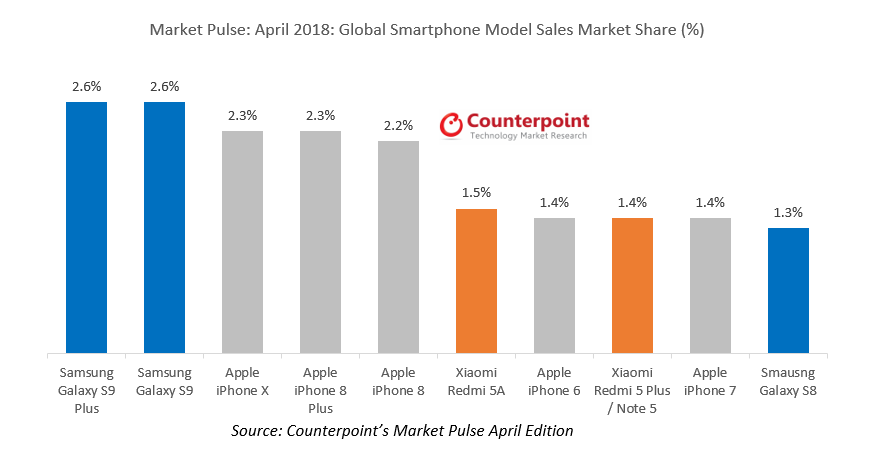