After rolling out the Nougat update for the Galaxy J7 (2016) two days ago, Samsung has started rolling it out to the Galaxy J7 Prime in India. The update brings a new UX to the phone along with improved notifications and quick settings as well as Dual Messenger and improved multi-window features.

The Galaxy J7 Prime Nougat update, with firmware version G610FDDU1BQH9, has a file size of 1143.09MB. Samsung has started rolling out the OTA, but if you haven’t received the update yet, you can check for the update manually by heading into Settings, tapping About Device, then selecting Download Updates Manually.

If you want to have a look at the new UX that will appear on the Galaxy J7 Prime after the update is intalled, you can check out all the screenshots of the Galaxy J5 and the Galaxy J7 (2016) that we posted earlier this week. Have you received the update yet? Let us know in the comments section below. 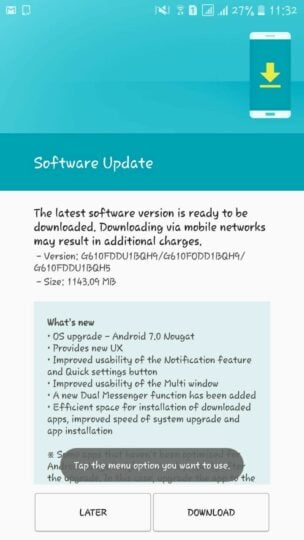