Samsung joined the club of other smartphone makers last year in letting its consumers beta test the next major Android upgrade – Galaxy S6 and Galaxy S6 edge owners were able to test Android 6.0 Marshmallow much before the update was made official. Now, the Korean giant has started beta testing Android 7.0 Nougat for the Galaxy S7 edge (and, we presume, the regular Galaxy S7 as well) in the UK.

With the Galaxy Note 7 out of the market, Samsung is no doubt looking to quicken the pace at which it completes porting Android Nougat to the S7 and S7 edge. This time, users will have to download the Galaxy Beta Program app from the Galaxy Apps store on their device to enrol for the beta program, although whether you are actually selected for the program is something Samsung will decide. The beta registration doesn’t seem to be working just yet, but it should once Samsung makes an official announcement of the program.

For those who can’t find the Galaxy Beta Program app in the store, the APK for the app is available for download from this link (alternate link here) so you can do a manual install. We will be working on getting the beta installed on our Galaxy S7 edge and will be publishing a detailed guide with instructions on how to register for the beta (remember, registration doesn’t mean you will be selected for the program). Also look for a full rundown of Android 7.0 on the Galaxy S7 edge in the coming days.

Update: Samsung has removed the Galaxy Beta Program app for now and it could be a while before it’s available for download once again. 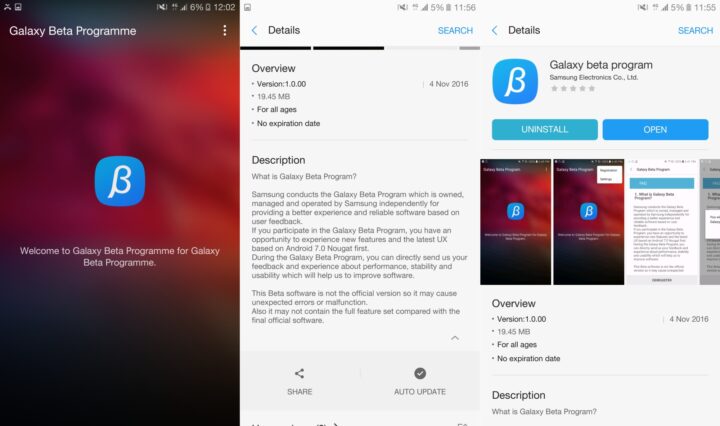