Samsung remains the biggest smartphone maker in the world at the end of 2020, but the company has never come closer to losing its spot to another Android OEM than it did this year. That other OEM, Huawei, actually edged past Samsung in April due to a number of contributing factors, of which one was the US trade ban, interestingly enough.

This was a short-lived success though, as you’re most likely aware. Huawei remains one of the world’s biggest smartphone brands but that’s mostly thanks to its success in China. Outside of China, it’s a different story.

Samsung vs Huawei in 2020: The top dog gets a lucky break

Overt the past half a decade, Huawei became one of the most popular smartphone brands in the world. It offered a rich portfolio of products, from affordable phones and tablets to high-end models that were able to steal some of Samsung’s sales figures in several key markets.

At one point Huawei became a real threat to Samsung in key western markets. It came closer to taking the crown from Samsung than any other Android OEM, but ultimately Huawei lost a lot of ground because of the US trade sanctions and various restrictions. For smartphone owners, this means Huawei smartphones no longer offer support for Google services, so no matter how solid the hardware may be, the software experience is fundamentally lacking.

Huawei maintained good shipping figures globally in 2020 but mostly thanks to its home country China. In the USA, Huawei’s smartphone market share is negligible, while shipments in Europe have been in a nosedive throughout the first three quarters of the year, as highlighted in this graph by Statista. 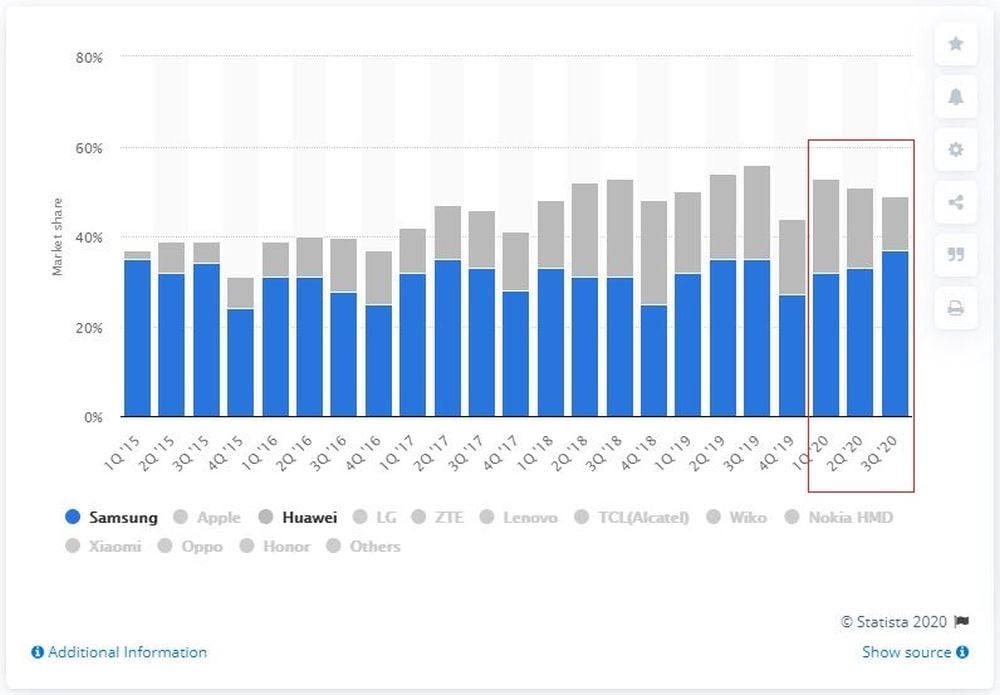 Huawei’s loss in Europe throughout the first three quarters of 2020 turned into success for Samsung. Russia was a similar story as Samsung regained the top spot from Huawei in Q3 2020.

But while Samsung Mobile’s marketing team was doing its part to pour salt in Huawei’s wounds, Samsung Display made sure it kept Huawei as a client. It sought and reportedly gained approval from the US Department of Commerce for the right to sell OLED panels to Huawei.

They both had a ridiculously rich product portfolio

Shipment figures and market share distribution aside, both Samsung and Huawei had a ridiculously rich mobile product portfolio in 2020. Samsung’s mid-range Galaxy A and M series thrived and the company is offering three Galaxy S20 models plus a dedicated Fan Edition Galaxy S20 FE, and two Galaxy Note 20 flagships.

As for smartwatches, both Huawei and Samsung have experienced year-on-year growth in Q3 2020, with Samsung holding 10% of the market (up from 8%) and Huawei having the upper hand with 15% market share (up from 10%), according to Counterpoint Research. But Samsung achieved 10% market share with fewer wrist wearable models released in 2020. They were the Galaxy Watch 3 and Galaxy Fit 2. Comparatively, Huawei has released five smartwatch models including one that resembles the Apple Watch, and a kids watch.

All things considered, although Huawei’s influence in western markets is declining, the company seems to have maintained its course, which must count for something. Huawei’s chipset arm continues releasing new Kirin chipsets. The Kirin 990 SoC that’s powering devices like the Huawei P40 Pro seem to generally do a better job than the Exynos 990 in synthetic benchmarks such as Geekbench. 2020 was a relatively better year for Samsung but, in many ways, the company may have gotten lucky.

Samsung vs Huawei in 2020: Samsung won the foldable war

Samsung’s victory across the foldable market has so far been uncontested. The original Huawei Mate X didn’t stand a chance against the Galaxy Fold, and the refreshed Mate Xs model – which was released as early as March – didn’t fare any better against it either. The spotlight was much more focused on the Galaxy Z Flip and, as we’ve mentioned before, maybe a foldable display on the outside of a phone really isn’t such a great idea… 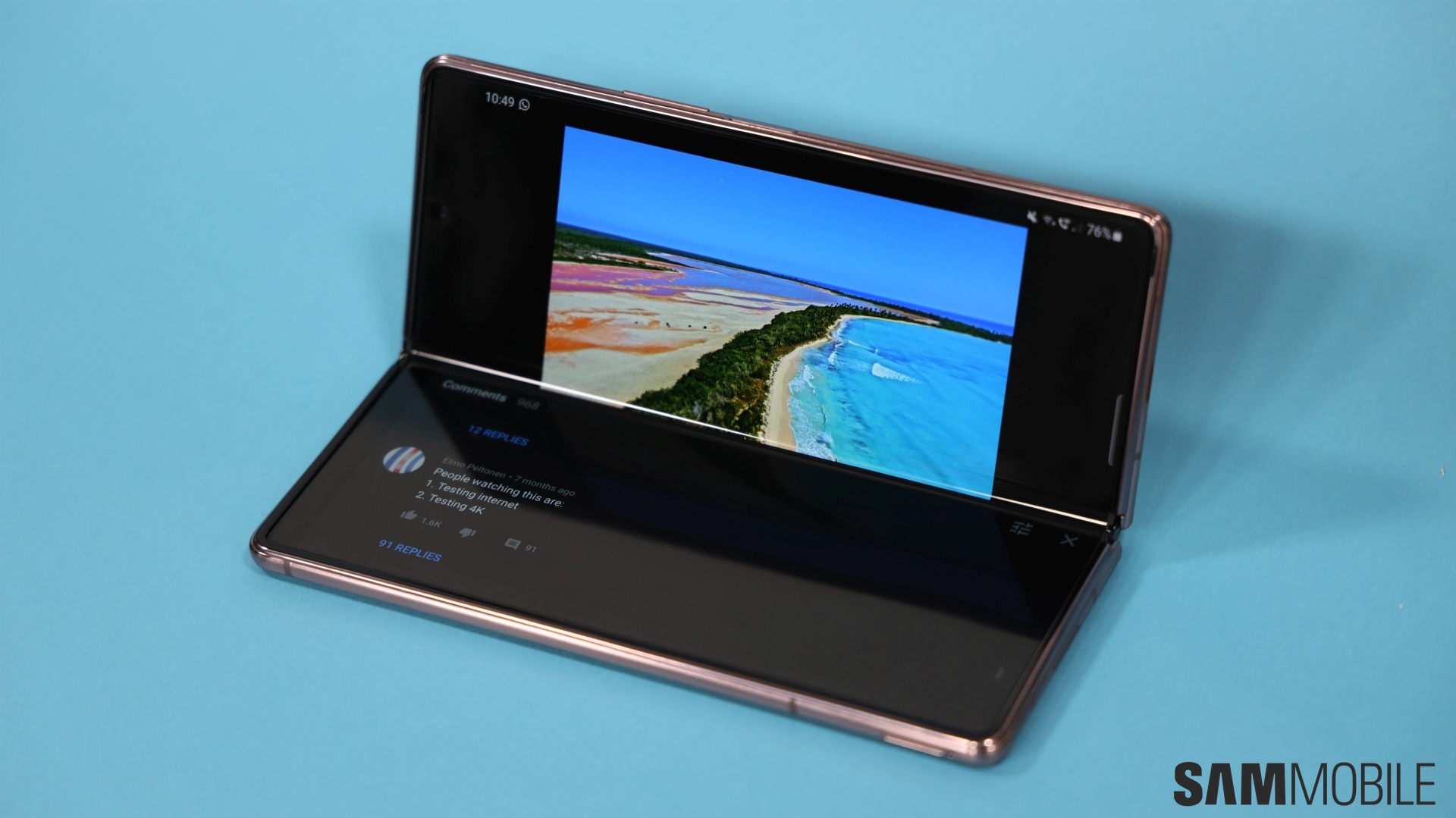 The Galaxy Z Fold 2 came along in September and it’s become the go-to flagship foldable for anyone who’s serious about this emerging technology and wants to experience the best. Right now, Samsung is the brand for foldable mobile tech and it may take years for a real competitor to show up. Huawei may have seemed like a threat in 2019, but this year it became obvious who the better innovator was in this segment.

Regardless of how things went for Samsung and Huawei in the mobile space or the display/memory supply segments, Samsung’s biggest victory with long-term consequences was perhaps that in the 5G race. We’re referring to 5G network equipment and not 5G-enabled consumer products.

Last year the global 5G market seemed split between Samsung and Huawei, with the latter establishing footholds in the USA and Canada after the ban on Huawei. It seemed like the Chinese tech giant would be able to offset its losses with a strong 5G presence over the European continent but 2020 was decisive for the company.

Network operators in numerous European countries have decided to ban Huawei from selling 5G equipment; others have decided against renewing their ongoing contracts with Huawei once they expire in the coming years.

Huawei’s misfortune has allowed Samsung to step in and provide an alternative to Huawei’s 5G solutions in many of these countries. In other words, Huawei’s 5G market share has declined while Samsung continues to win new 5G contracts in more markets. 2020 has shaped the 5G segment in a way that will ripple across the industry over the coming years and Samsung will probably ride the wave.

2020 was a tough year for a lot of OEMs, logistics-wise if nothing else, but Huawei had to deal with the unexpected market changes as well as the restrictions imposed by the USA and other nations. But the company hasn’t imploded as some may have expected. Instead, it continues to enjoy success in China.

Samsung has greatly benefited from Huawei’s losses in many segments but the company was also able to innovate and adapt to market changes. Nevertheless, Samsung almost lost the lead in the smartphone race to Huawei in 2020 and if it hadn’t been for the bans and restrictions, who knows what the present would’ve looked like? Feel free to take a guess in the comment section below.