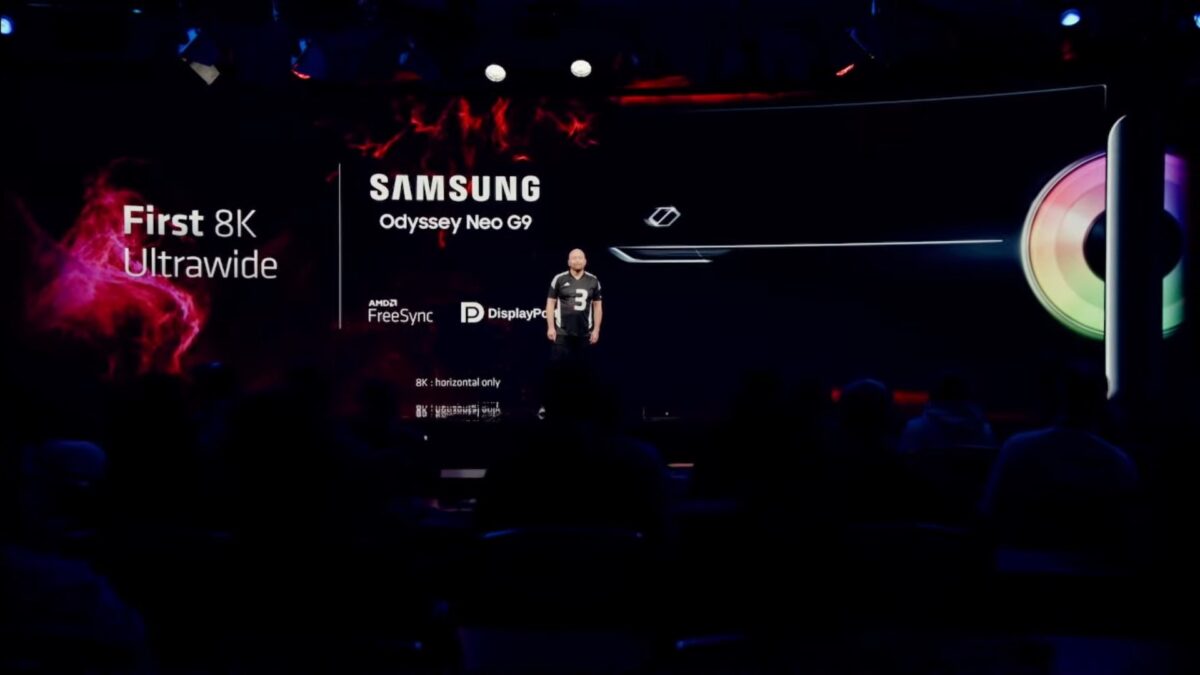 Samsung makes some of the best gaming monitors in the world. The Odyssey Neo G9 and the Odyssey OLED G8 have impressed everyone worldwide. Now, the company is planning to launch an even bigger and higher resolution gaming monitor featuring 8K resolution.

During AMD’s Radeon RX 7900 XTX and RX 7900 XT launch event, the company revealed that Samsung will soon launch the next-generation Odyssey Neo G9 gaming monitor. It will be the world’s first 8K ultrawide gaming monitor, perfect to showcase the performance of AMD’s newest flagship GPU. The upcoming monitor could debut just before the CES 2023 event. Going by its name, it will be a Mini-LED-backlit monitor with a QLED display panel, similar to its predecessor. To support high-refresh-rate gaming at 8K resolution, it will feature AMD FreeSync and a DisplayPort 2.1 port with UHBR 20 specification. It also appears to feature RGB lighting on the back.

Currently, Samsung’s highest resolution monitor is the Odyssey Neo G9 with 5K resolution (ultrawide), and it costs a whopping $2,200. So, an 8K ultrawide monitor will likely be even more expensive, and it needs an equally expensive PC attached to it to take its full advantage. Such a PC needs one of the newer AMD Ryzen 7000 or Intel 13th Gen Core i7 CPUs and an AMD Radeon 7900 XTX GPU so that there’s no bottleneck while processing graphics at high frame rates.

It will also take some time for developers to optimize their games for 8K resolution. So, the next-gen Odyssey Neo G9, although a technological achievement, would only be suitable for a few consumers with very deep pockets.

Samsung’s CES 2023 presence has all been about revealing new TVs, monitors, foldable, slidable and other display concepts, and even a Galaxy A series phone. The Odyssey Neo G9 and the Odyssey OLED gaming monitors were among the new products that we managed to get some hands-on time with earlier this week, and we came […]

At the CES 2023 expo, Samsung unveiled its new generation of Neo QLED TVs for 2023. Based on improved Mini-LED technology, the company’s new premium TVs come in 4K and 8K models, and they all feature higher brightness, improved colors, and a lot of new software features. Samsung’s 4K and 8K Neo QLED TVs for […]

Ahead of the commencement of the CES 2023 expo, Samsung unveiled a bunch of new monitors and home appliances. The Odyssey Neo G9, Odyssey OLED G9, and ViewFinity S9 monitors are joined by a new version of the Smart Monitor M8. This new monitor is upgraded with more intelligent software, an upgraded webcam, and a […]