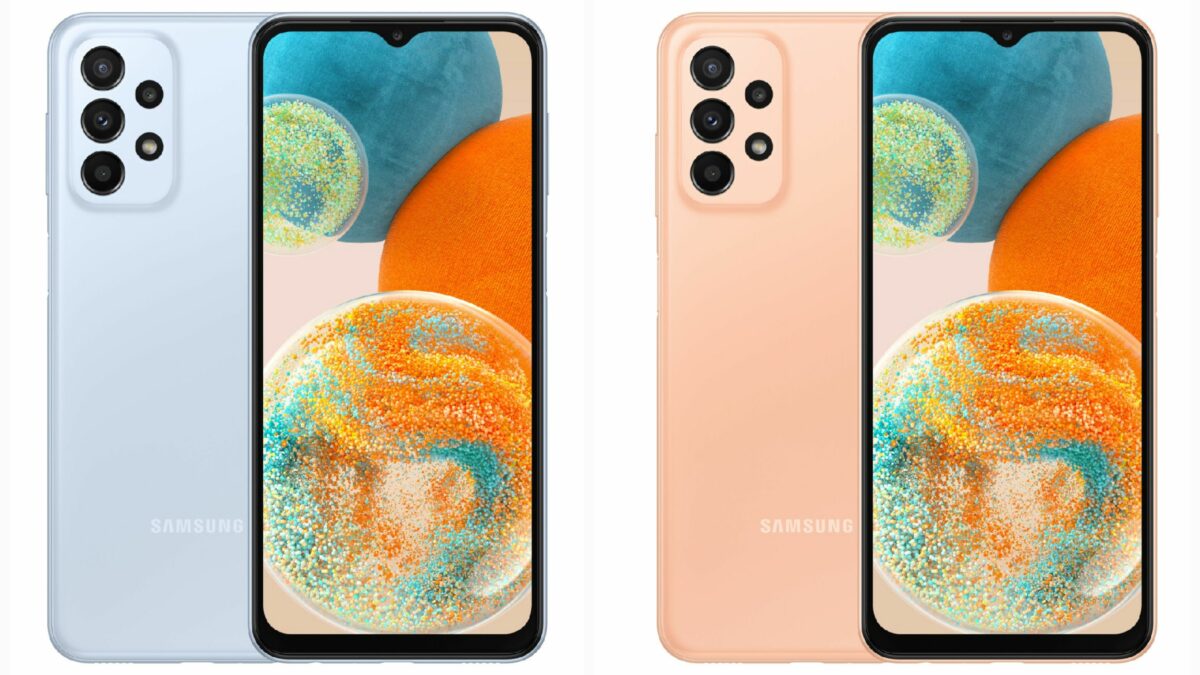 Amid all the recent leaks concerning Samsung’s next Unpacked event on August 10, the Galaxy A23 5G has popped up online again through unofficial channels. Leaked renders have now revealed the overall design and color options, and we also have a full list of specifications to look through.

Samsung’s upcoming low-cost phone features a 6.6-inch FHD+ display and a quad-camera combo, including a 50MP primary sensor with OIS, a 5MP ultra-wide camera, a 2MP depth sensor, and a 2MP macro shooter. The selfie camera has an 8MP resolution and is embedded in an Infinity-V display notch. (via @Sudhanshu1414)

Although the Galaxy A23 5G will be a low-cost phone, Samsung has high aspirations and gave the A23 a few characteristics that usually belong to more expensive phones, such as 5G connectivity and 25W charging. That is, aside from a 50MP sensor with OIS.

In terms of raw hardware, the Galaxy A23 5G will ship with 4/6/8GB of RAM and 64GB or 128GB of built-in storage expandable by up to an additional 1TB via microSD. Other technical and software details include Bluetooth 5.1, Android 12, One UI 4.1, and the Snapdragon 695 chipset rather than a Dimensity solution from MediaTek.

Samsung will release this device in at least four color options: black, blue, pink gold, and white, all of which you can see in the image gallery below. The phone reportedly weighs a little south of 200 grams and measures 165.4 x 76.9 x 8.4mm.

With such precise specifications now out in the wild, Samsung might be readying the Galaxy A23 5G for imminent release. The device has already paid a visit to Bluetooth SIG, the FCC, and other regulatory agencies. In Europe, the phone could launch for around €300. Stay tuned.

Samsung unceremoniously lists the Galaxy A23 5G on its website

A lot has been leaked about the Galaxy A23 5G smartphone. Right from its design to its price, almost everything has been out there in the open. Of course, those were mere leaks, and nothing was official. After some busy rounds of leaks, Samsung has finally launched the Galaxy A23 5G, in a rather unceremonious […]

Here’s how much Galaxy A23 5G could cost in Europe

After launching the Galaxy A23 in March 2022, Samsung is now planning to launch the 5G version of the smartphone. The device will have a different chipset altogether, considering that the Snapdragon 680 chipset inside the Galaxy A23 lacks support for 5G networks. A new report claims that the Galaxy A23 5G will land in […]

Another cheap Samsung 5G phone, the Galaxy A23, is inching closer to release

The 5G variant of the Galaxy A23 keeps dodging the market four months after the launch of the LTE model. Nevertheless, the device keeps coming back in the headlines month after month, and we recently got another reminder that Samsung hasn’t forgotten about the Galaxy A23 5G. The low-cost 5G phone has just paid a […]

Samsung Galaxy A23 5G may soon be available in the US

Samsung could soon offer customers another low-cost 5G smartphone powered by a Qualcomm chipset. The Galaxy A23 5G was recently spotted at Geekbench, and assuming that the benchmark entry is legitimate, the low-cost Samsung device will hit the shelves in the United States rocking the Snapdragon 695 SoC. The Galaxy A23 5G has yet to […]

Samsung is gearing up to release another budget 5G smartphone in Europe. This time, it’s the 5G variant of the existing Galaxy A23 (4G). Precise release details remain unclear, but it’s the middle of 2022, and the clock is ticking on the 5G variant. This means European customers should soon have one more option for […]