Bixby may soon be able to speak in German

Bixby was late to the market when compared to other virtual assistants out there. As a result, it lags behind other assistants in terms of both availability and capabilities. Samsung has been continuously working to improve the service, and with each update, it is tackling some of Bixby’s limitations. Support for the German language seems to be one of such improvements that Samsung is bringing to its virtual assistant soon.

Interestingly, the news about imminent support for German comes from Bixby itself. Upon asking “Do you speak German?”, Galaxy users are receiving a reply saying, “Soon enough we’ll have tons of conversation in German!”. When Bixby is asked the same question about Hindi (or any other unsupported language for that matter), the reply is slightly different and less assuring, indicating the Bixby answer about German is indeed a hint for the forthcoming launch.

Making the upcoming change even more apparent, Samsung showcased Bixby demos in German to the visitors at the recently concluded IFA 2018 in Berlin. Though the company has refused to officially comment on the arrival of German language support, the launch seems obvious and not very far. 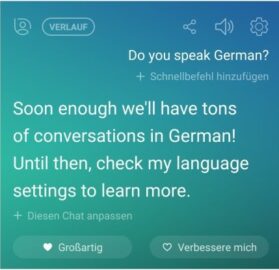 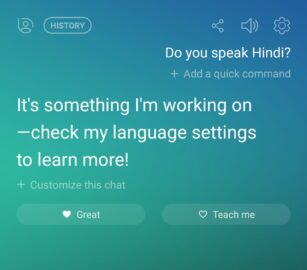 Samsung is expected to announce more improvements to Bixby at the Samsung Developer Conference in November. The company is also going to showcase and possibly launch its Galaxy Home smart speaker at the same event. The timing seems apt to officially announce German on Bixby to expand the market for the Galaxy Home beyond the English-speaking countries.