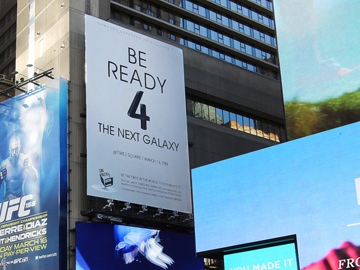 Today SamMobile received new information about Samsung’s upcoming flagship device, the Galaxy S IV.
The Galaxy S IV is going to have floating touch technology, this has been previously used by Sony inside the XPERIA Sola. Floating touch is like using your finger as a cursor or Samsung’s Air View which can be very handy, for example hovering over a Picture Album to get a sneak at the pictures inside. Until now Samsung used floating touch as Air View only in the SPEN but this time Samsung is making their new flagship, the Galaxy S IV, smarter than any other device on the market! Which is really good to know.

We already know about Samsung’s new smart functions called Smart Scroll, Smart Pause, Smart Stay and Smart Rotation. Those new functions were made possible thanks to the front camera.

Now that’s not the only thing we received, SamMobile can also report about the display of the Galaxy S IV, which Samsung may use. According to our insider, the Galaxy S IV will use a new kind of Display. The new AMOLED material called “green PHOLED” uses color GREEN-YELLOW makes these AMOLED display’s 25% more efficient. Which is good news for the battery life. The resolution of the panels are of course Full HD. Now if we check the video below we hear the man saying about

I know this is going to be one of the most amazing products to hit the market, since TV were colour.

And at the end of the video there is a very high brightness when opening the box which could hint about new screen technology by Samsung.

So far we have told you about the new floating touch technology and the “Green PHOLED” display but we aren’t finished yet! Lets confirm some more things about the Galaxy S IV. Our insider was able to confirm that the Galaxy S IV will run Android 4.2.1 out of the box and will be given the Android 4.2.2 update in the same month of release. The Galaxy S IV will also have a new camera feature called Samsung Orb (360 degree photo capturing a.k.a. Photosphere ), this feature has been rumored before. The device will have a 13 Megapixel camera and an Exynos Octa processor with 2GB of RAM. Samsung will also be using a new TouchWiz Nature UX (Nature UX 2.0?).

There are many prototypes of the Galaxy S IV, so it’s really difficult to get the exact specifications of the device. For example, prototype A uses Exynos Octa with Full HD GreenPHOLED / AMOLED display and prototype B uses SuperLCD3 with Qualcomm Snapdragon 600 etc…

Samsung will be announcing the Galaxy S IV on March 14th in New York, U.S. A live stream can be followed by Samsung Mobile on YouTube and Facebook. There is still no sign about any landings page or countdown page of the Galaxy S IV yet.