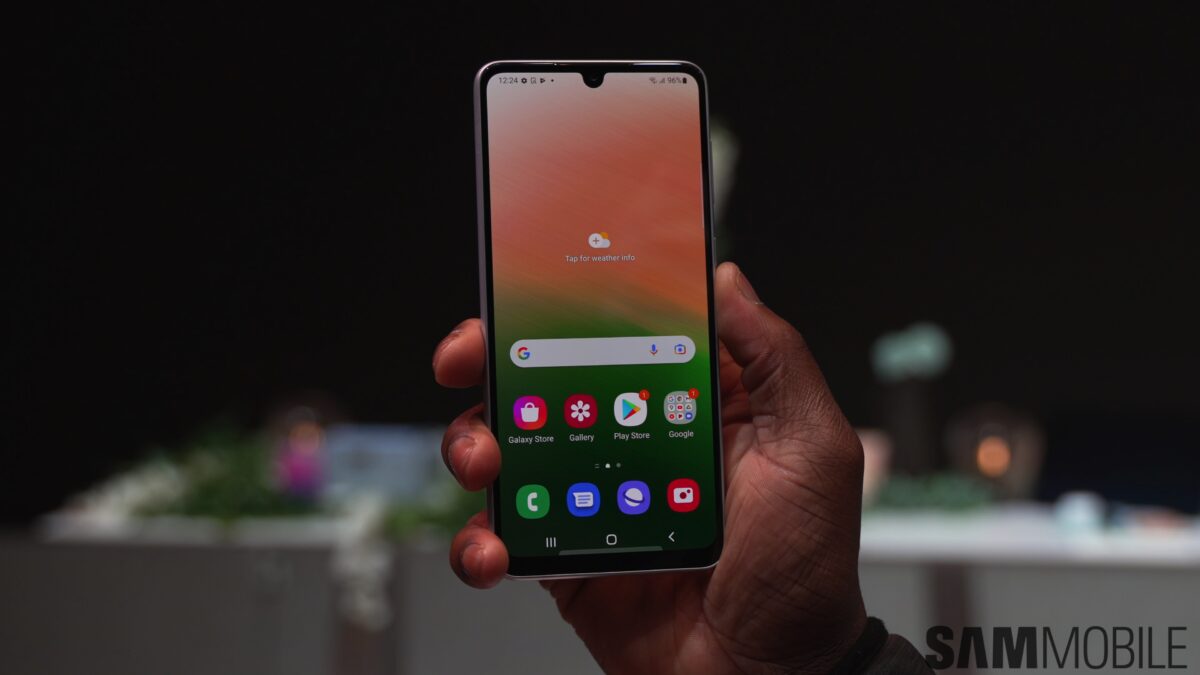 There are mid-range phones and then there are mid-range phones, the Galaxy A3x series has always been the latter. Last year’s device, the Galaxy A32, had all the right specs for someone who wasn’t a gamer. The MediaTek chipset left a lot to be desired in the performance department. Samsung did provide a 90Hz refresh rate display to make the device more attractive to customers.

This year, the focus has been on improving the performance, and that’s something we can get behind. There’s a new 5G-enabled 5nm chipset, more internal storage and even an IP67 rating for water and dust resistance. When you get all of that at an affordable price point, suddenly the device seems like a very compelling option. Our Galaxy A33 hands-on expands a bit more on why that is. 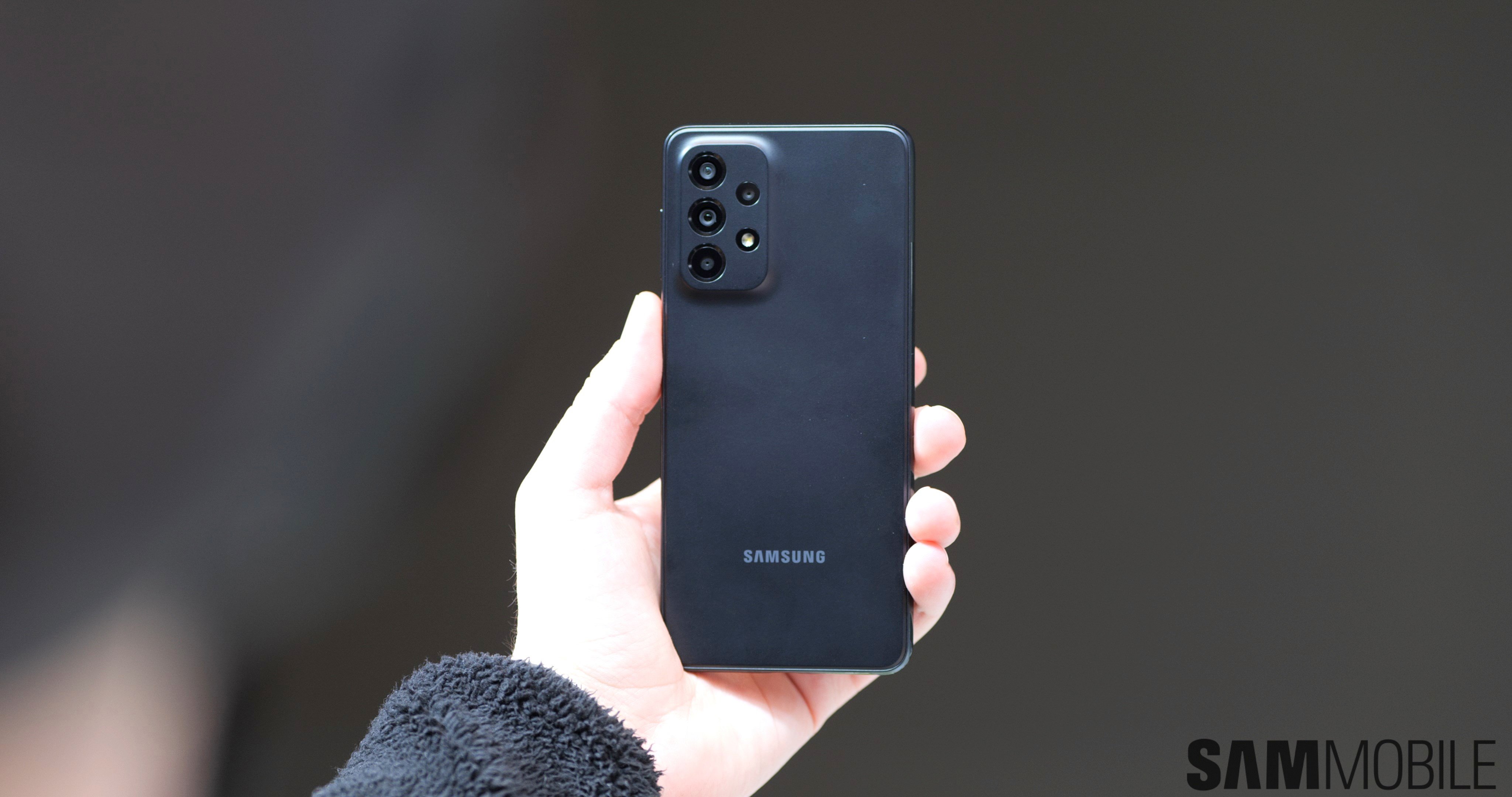 It’s all about the back of the device these days since the front is dominated by the display. The Galaxy A32 went for a more streamlined look as the camera module was flush to the body. On the Galaxy A33, Samsung has placed the camera sensors on an island that seamlessly rises from the back panel.

We’ve seen this design language on other Samsung devices and it’s quite good. The back itself is made out of plastic but the material does feel to be of a higher quality than we’ve experienced in the past.

The Galaxy A33 has an IP67 water and dust resistance rating. This is a welcome upgrade. Samsung is lowering the price point for devices that have this level of durability. This will provide peace of mind to customers to buy the Galaxy A33.

The fit and finish are absolutely fine. Samsung has four new color options for the device and they’re called Awesome Black, Awesome White, Awesome Blue and Awesome Peach. The last two are our favorites. 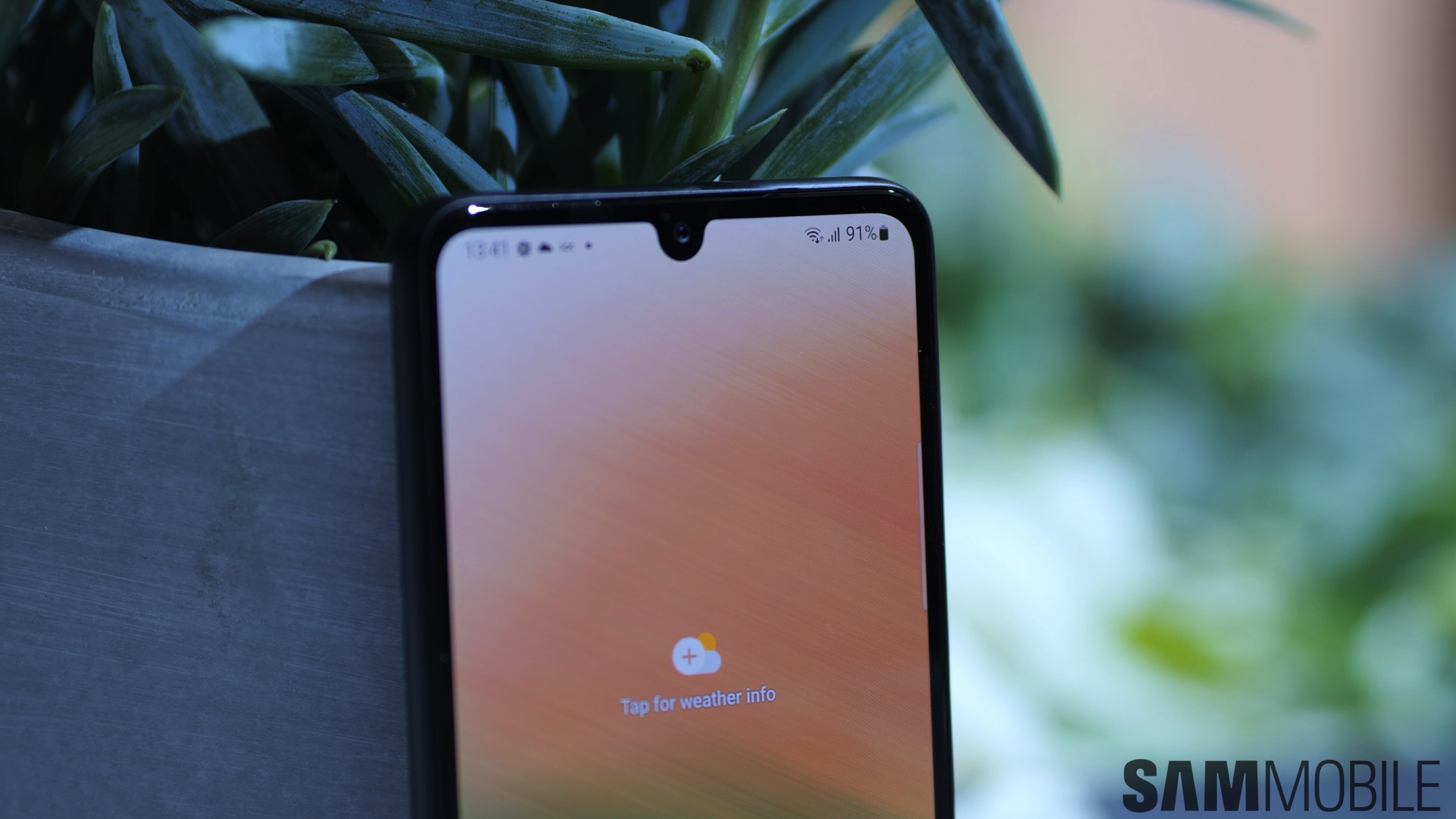 The Galaxy A33 is equipped with a 6.4-inch FHD+ Super AMOLED Infinity-U display with a 90Hz refresh rate. There’s no improvement here compared to last year as the higher refresh rate was introduced with the Galaxy A32. Samsung’s mobile OLED panels are always of great quality. No surprises here as well. It also gets nice and bright courtesy of the High Brightness Mode which can go up to 800 nits of peak brightness.

The sound experience has been elevated with the use of dual stereo speakers. They get nice and loud while maintaining decent quality. Samsung has removed the 3.5mm headphone jack, though, so you’ll need to invest in some wireless earbuds. 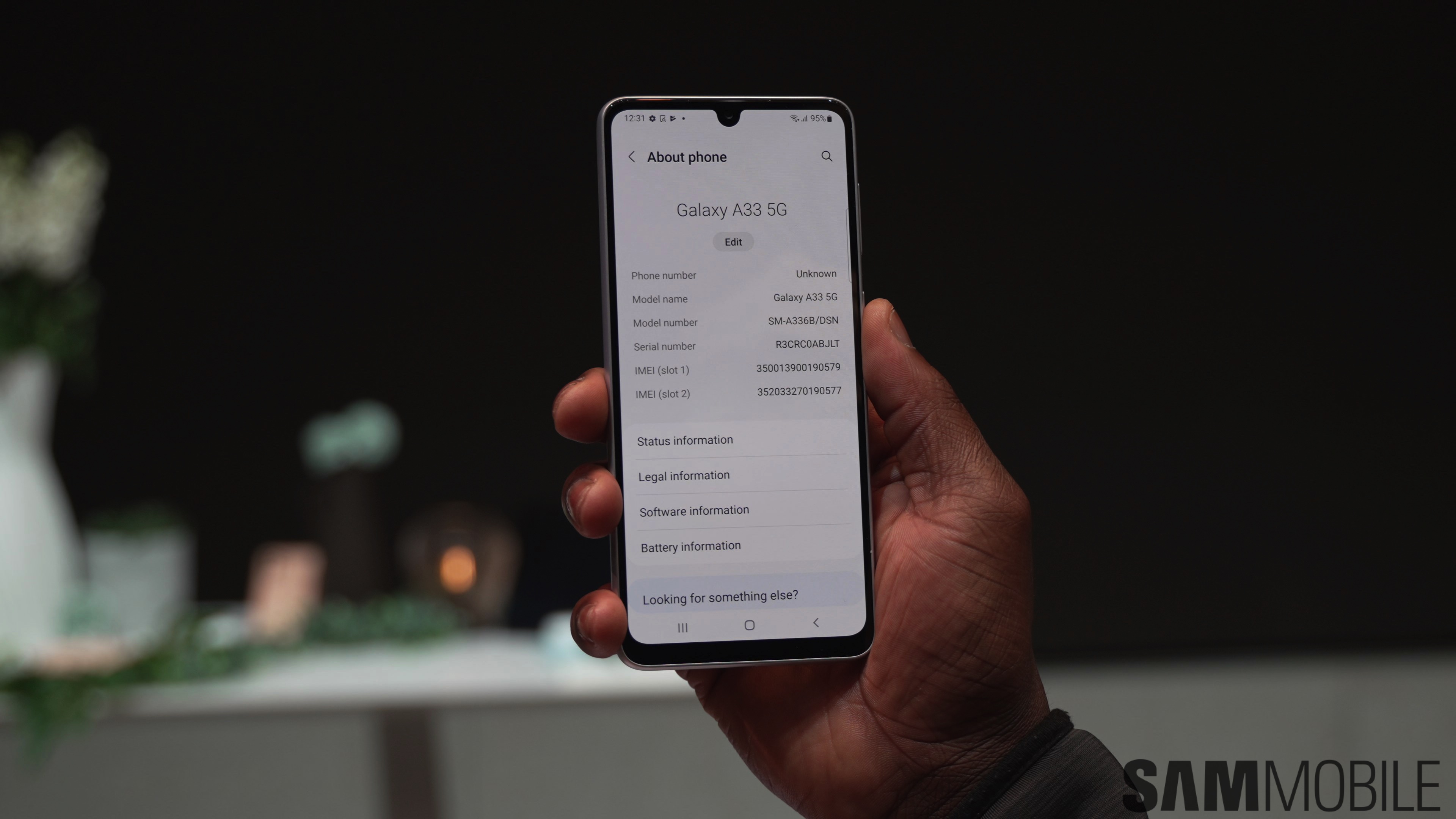 The MediaTek Helio G80 inside the Galaxy A32 was just not good enough. Gaming on the device was a pain and it even struggled to properly support the higher refresh rate. It just made for a subpar user experience.

I’m glad to report that this isn’t the case with the Galaxy A33. Samsung has used its latest 5nm Exynos 1280 chipset inside the Galaxy A33. It’s exactly the same processor that the company is using inside its new Galaxy A53. That’s great company for the Galaxy A33 to be in.

Compared to the Galaxy A32 5G, Samsung is claiming a 44% and 27% improvement in single-core and multi-core CPU performance as well as a staggering 50% bump in GPU performance. AI performance is up by 406%. On paper, this is clearly a major upgrade for the Galaxy A33. The chipset is paired with 6/8GB RAM and 128/256GB storage.

Based on the time we’ve spent with the device so far, the performance has noticeably improved. The higher refresh rate is now devoid of stutters and lag. Apps launch quickly and the device doesn’t feel bogged down. We look forward to seeing how it performs for mobile gaming in our full review. 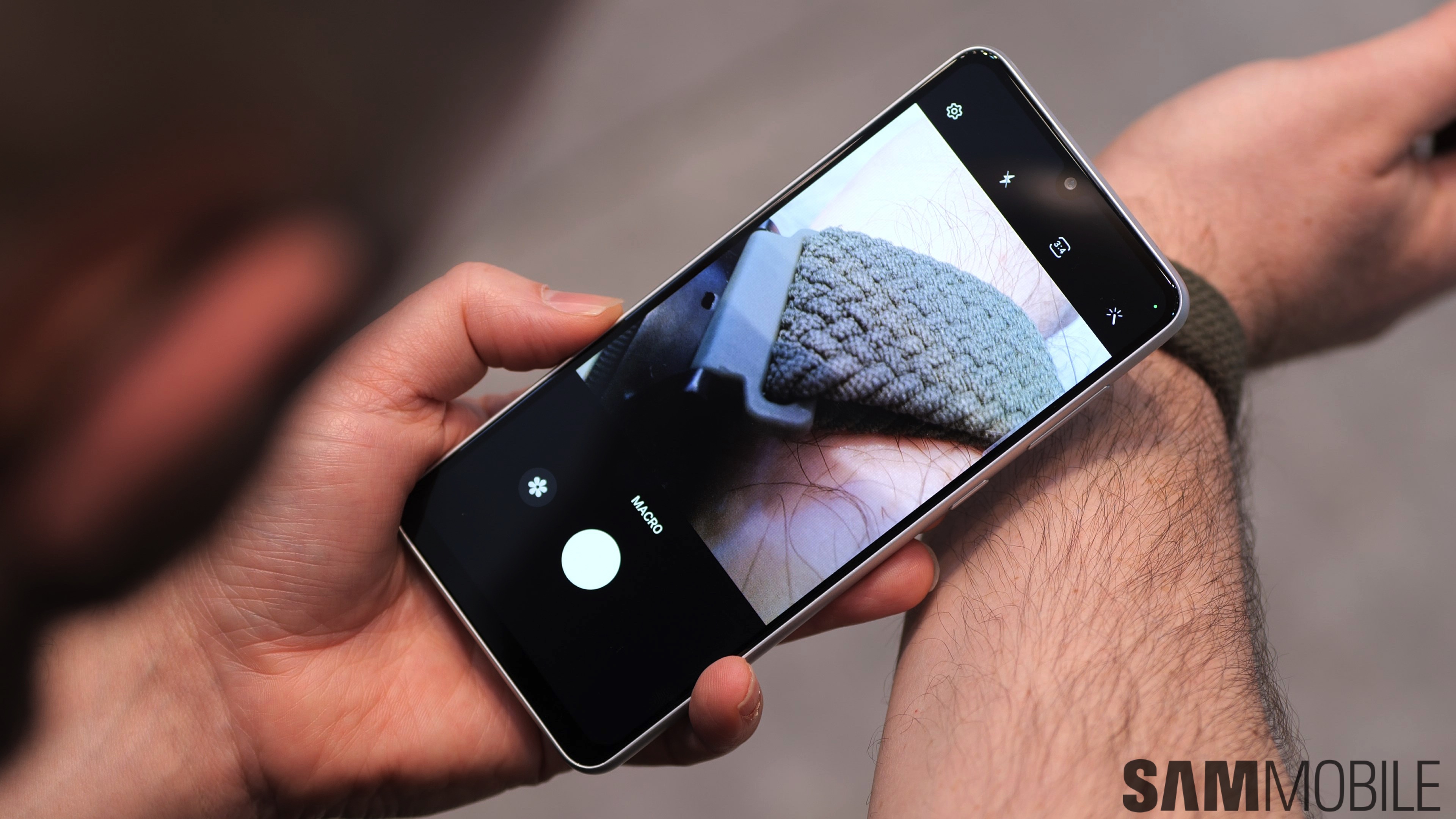 The camera setup gets upgraded as well with a 48MP optically stabilized main sensor. It’s paired with an 8MP ultra-wide, 2MP depth and 5MP macro sensors. Results from the primary sensor are respectable but obviously, nothing to write home about, given that this is a budget device after all. There appears to be decent noise control in daylight shots.

Low-light photography won’t be particularly impressive but Samsung has made some camera software improvements to help out with that. We’ll dive into more detail about the camera’s capabilities in our full review. 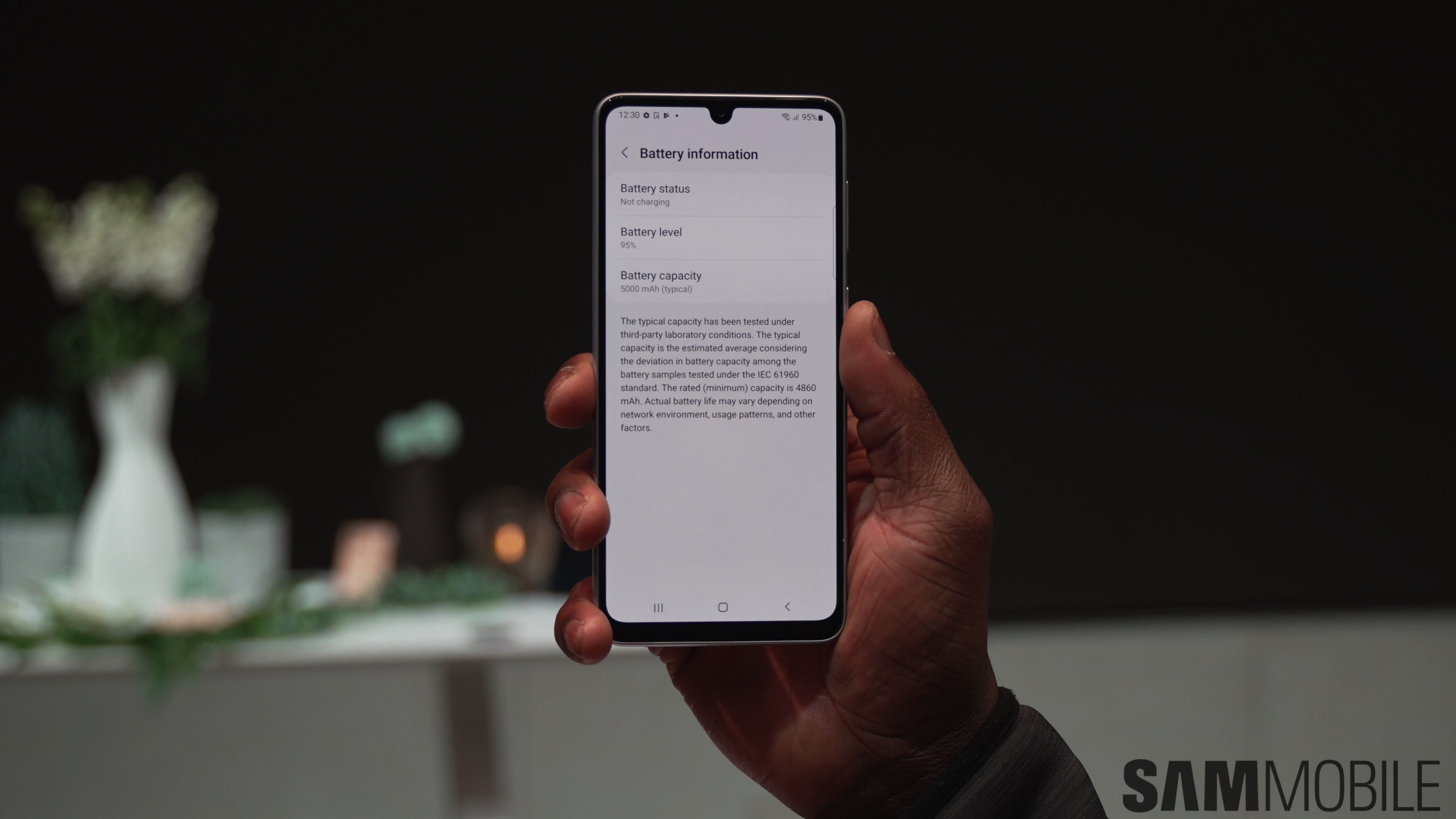 The Galaxy A53 has the same 5,000mAh battery as its predecessor but it now supports 25W charging. You probably won’t like the fact that Samsung is no longer providing a charger in the box. You’ll need to buy its 25W charger on your own.

Samsung claims that the battery will be able to last about two days on a single charge. The initial signs appear promising, but we’ll put those claims to the test in our full review. 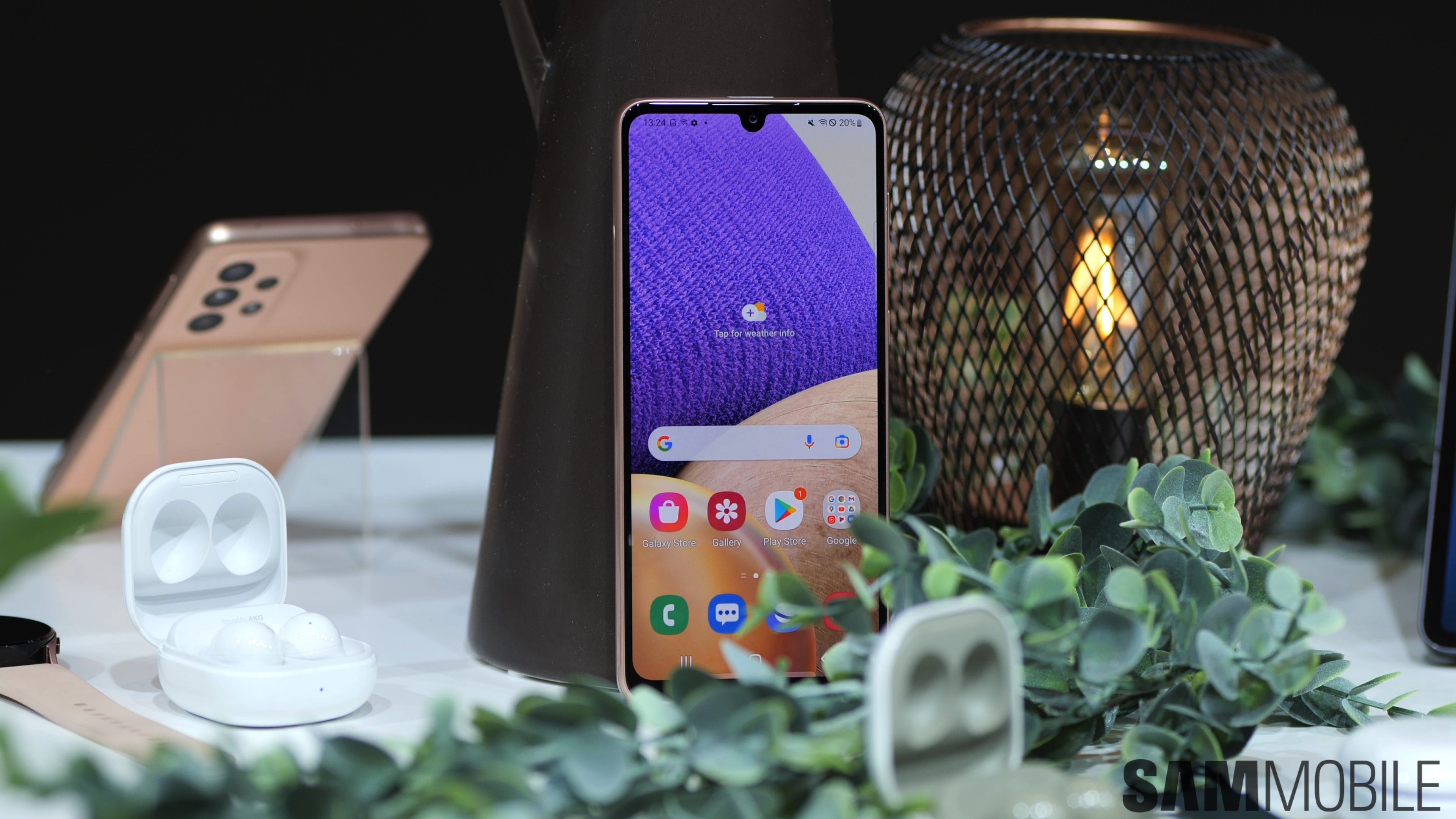 You get Android 12 and One UI 4.1 pre-installed on the Galaxy A33. So Samsung’s latest software experience is on offer. Samsung is also supporting this device for four years of Android OS upgrades and five years of security updates. This is an unprecedented commitment for a device in this price range.

It’s clear that Samsung genuinely wants the Galaxy A33 to be a better device than all of its predecessors. Our initial impression from the Galaxy A33 hands-on is that it has succeeded in this mission.

The new chipset makes it a capable device for its price point. The addition of IP67 water and dust resistance is just the cherry on top. Throw in the great software support and you’ve got a mid-range phone that stands in a league of its own.