Samsung’s Camera Controller app has been updated to support the Galaxy S20 series. If you own one of the latest flagship models, you can now download the app, sync the device with a compatible Samsung smartwatch, and use the wearable as a remote viewfinder and shutter button.

Turn your smartwatch into a remote shutter/viewfinder

The idea behind Camera Controller is simple. The app lets you sync your smartphone and smartwatch, and use the wearable’s screen as a viewfinder and remote shutter button. It even allows users to swipe up or down on the smartwatch to switch between the front and rear-facing cameras of their connected smartphone.

The app can be used to capture photos as well as record videos. There are some obvious limitations, and you won’t have remote access to all of the camera features that are available on your phone’s viewfinder. For example, you can’t switch between video modes from your smartwatch, and you can’t watch your recorded videos from your wrist. You’ll still have to rely on your phone’s screen to do that.

The Galaxy S20 series, and the Galaxy S20 Ultra, in particular, boasts an impressive camera setup. Having the ability to turn your smartwatch into a remote shutter button and viewfinder for the new flagship is most welcomed, especially given that you can achieve better night shots if you put your phone down.

The new update pushes the app to version 1.0.79 and should also include some minor bug fixes that have remained unspecified. You can download the latest Camera Controller version for your Galaxy S20 series from the Galaxy Store. 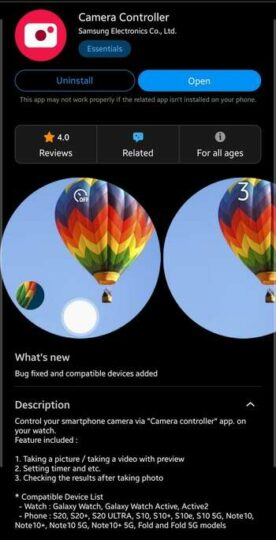