Galaxy A22 vs Galaxy A32: The battle of the 90Hz budget phones 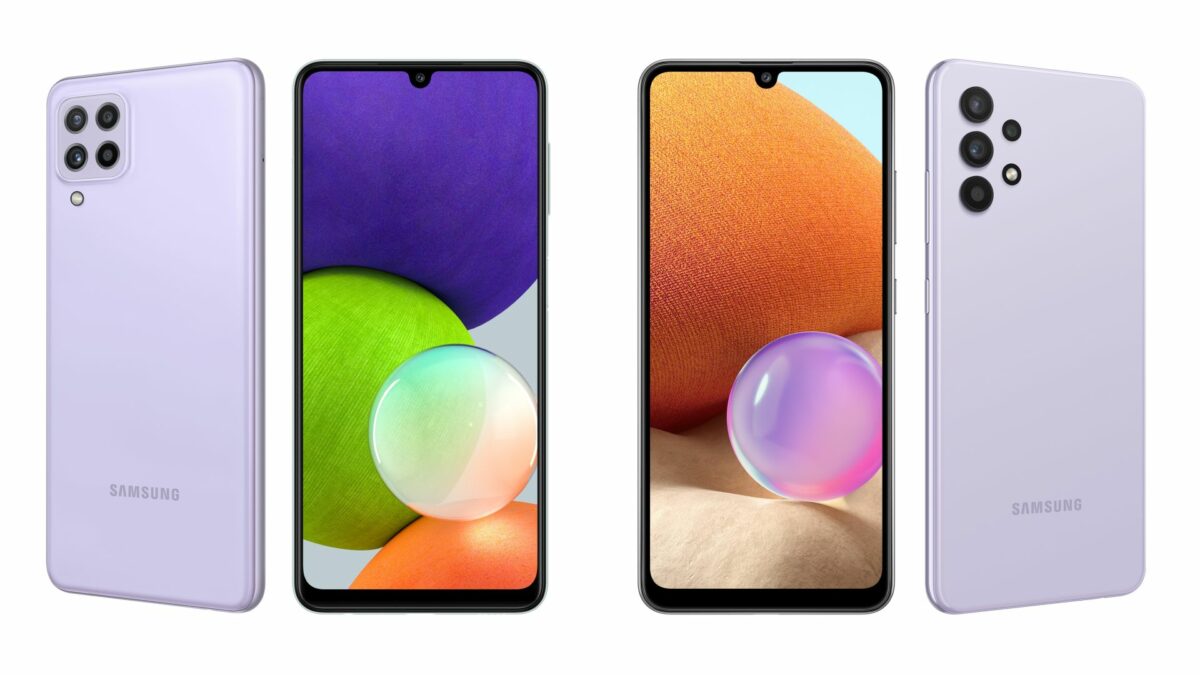 Samsung is enriching its budget smartphone portfolio with the addition of the Galaxy A22. Announced earlier today, the Galaxy A22 4G / LTE feels like a cheaper alternative to the Galaxy A32, though in true Samsung fashion, the two devices ended up sharing a few hardware components.

Both smartphones are powered by the same chipset and boast a high refresh rate 90Hz display, at least as long as they are the 4G variants, which we’ll be taking a closer look at below.

The Galaxy A32 remains technically superior, and most of us would probably agree that it looks better than the Galaxy A22. That’s to be expected, given their places on the market, but just how different and/or similar are they? Let’s find out.

As mentioned above, both phones have 90Hz displays, which means they are capable of rendering smoother animations throughout the UI and supporting apps.

The Galaxy A22 and A32 have 6.4-inch Super AMOLED displays, and both feature an Infinity-U notch.

Samsung’s latest budget smartphone features four rear-facing cameras, including a 48MP main sensor with OIS. In contrast, the Galaxy A32 has a 64MP main sensor with PDAF that lacks OIS. In theory, this should give the Galaxy A22 an advantage when capturing photos in low-light conditions and when recording videos in motion.

As for selfies, the Galaxy A22 has a 13MP unit, whereas the Galaxy A32 benefits from a 20MP sensor.

Each phone has a distinct camera housing design, and they both feature plastic frames with a metallic finish. The Galaxy A22 has a traditional camera hump, whereas the Galaxy A32 has individual cutouts on the back panel for each camera.

The Galaxy A22 has a side-mounted fingerprint sensor, while the Galaxy A32 hides it under the display.

Galaxy A22 vs Galaxy A32: Hardware and software

For better or worse, neither the Galaxy A22 nor the Galaxy A32 comes with an Exynos chipset. Instead, Samsung opted for a solution built by MediaTek, namely the Helio G80 SoC.

It was manufactured on a 12nm process. It has two Cortex-A75 CPU cores clocked at 2.0GHz, and six Cortex-A55 cores operating at 1.8GHz. The CPU works alongside a Mali-G52 MC2 graphics chip.

The Galaxy A32 has more RAM options at 4GB, 6GB, and 8GB, while the Galaxy A22 is missing the 8GB option (though it is available for the 5G variant).

Other similarities across both phones include a 5,000mAh battery with 15W fast charging, Bluetooth 5, NFC, a USB-C port, and a 3.5mm headphone jack. They also ship with Android 11 and One UI 3.1.

Galaxy A22 vs Galaxy A32: Conclusion

As of this writing, Samsung hasn’t revealed any pricing details for the Galaxy A22, but it will be cheaper than the Galaxy A32. The latter phone is superior, but they’re different enough to coexist, which means that the price gap will make all the difference. The Galaxy A22 might sound like a decent low-cost phone in a vacuum, but that won’t mean much in the real world if it won’t be cheap enough to justify skipping the Galaxy A32.

You can refer to our device comparison tool below for a closer look at the technical details.

Samsung usually starts rolling out new monthly patches a week or so early, but the July 2022 security patch is making its debut precisely on July 1. It is now being distributed in South Korea for the Galaxy A32. The modest Galaxy A32 is the first Samsung phone to boast the latest July 2022 security […]