Samsung was the global smartphone leader in Q3 2021, with a market share of 21.2%. However, its position is expected to drop as Apple could overtake the South Korean firm in Q4 2021, thanks to impressive iPhone 13 sales. A new report claims that Samsung’s smartphone market share could drop below 20% by the end of the current quarter.

Market research firm TrendForce estimates that Samsung’s smartphone market share could drop to 19.4% in Q4 2021. On the other hand, Apple’s market pie could expand to 23.2% during the same period, taking the iPhone maker to the top position in smartphone rankings. Apple could sell more than 25 million iPhone SE 2020 units during the period.

The analyst firm expects cumulative smartphone sales in 2021 to reach 1.335 billion, which is 10 million lower than initial estimates. TrendForce says that the ongoing chip shortage has led to lower smartphone shipments. It is expected that the situation might improve by the end of next year. 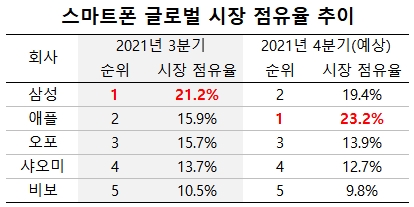