Everything we think we know about the Galaxy S8 Active

Samsung has been working on a ruggedized variant of the Galaxy S8 for a while now, and it’s starting to look like its release is right around the corner — so we thought we’d take this opportunity to recap everything we’ve heard about the Galaxy S8 Active.

In line with previous Active-branded handsets, the Galaxy S8 Active will launch exclusively through AT&T. It’s rumored to hit the shelves on August 1, with pricing set between $650 and $750, but you should be able to pick it up for less when the carrier kicks off its summer sale.

According to a hands-on image that surfaced online on Monday, the Galaxy S8 Active packs a 4,000mAh battery, which should see it through two-to-three days’ worth of intermediate use, judging by how well the Galaxy S8+ performs with its 3,500mAh cell.

The Galaxy S8 Active features a similar design to the Galaxy S8, but it will reportedly be constructed from military-grade polycarbonate and has a protruding metal bezel to protect both the handset’s display and internals. 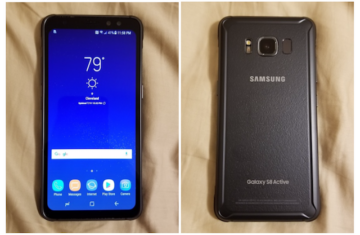 Unlike the Galaxy S8 and Galaxy S8+, the Galaxy S8 Active doesn’t sport a curved Infinity Display. Instead, Samsung opted for a flat 5.8-inch panel that features equally thin bezels and is coated with Gorilla Glass 5 to shield it from scrapes and scratches.

Recently, the Galaxy S8 Active stopped by the FCC in the United States running Android 7.0 Nougat. The handset will also have Bixby on board (with the Bixby button replacing the traditional Active key) and a set of on-screen navigation buttons à la Galaxy S8.

Aside from packing a beefier battery, the Galaxy Active should ship with the same internals as the Galaxy S8. Under the hood, you’ll find a Snapdragon 835 octa-core processor, 4GB of RAM, a 12MP rear-facing camera and an iris scanner.

We’ll be updating this post with new information as and when it comes out. What do you think of the Galaxy S8 Active? Are you forward to picking one up, or will you be waiting for the Galaxy Note 8 that’s scheduled to launch in late August?