We’ve heard much about the new AKG earphones Samsung would place in the box with the upcoming Galaxy S8 and Galaxy S8+, and the images have now surfaced, and we provided an exclusive a few months ago highlighting new cases as well as a 2,600mAh backpack for the next-generation flagships from Samsung, but it seems as though the Korean giant is not yet done with battery accessories.

A new 5100mAh power bank has surfaced online in both grey and blue colors with USB Type-C charging and 15W Fast Charging capabilities. The model number, EB-PG950, reminds us that the model number for the upcoming Galaxy S8 is SM-G950, seeing that Samsung’s cultural tetraphobia prevents the Korean giant from using the number “4” in its model number listing. This new accessory confirms USB Type-C charging for the Galaxy S8 (though leaks have already confirmed this long ago). 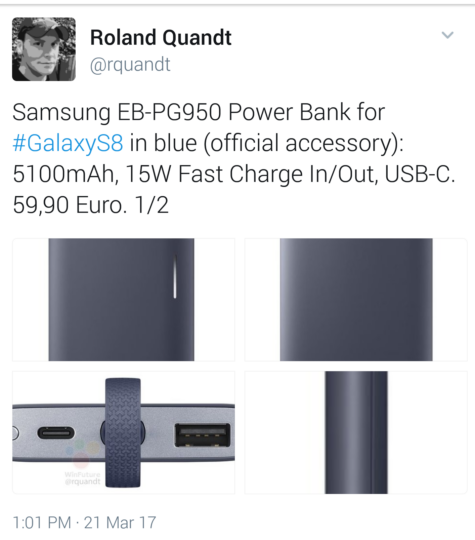 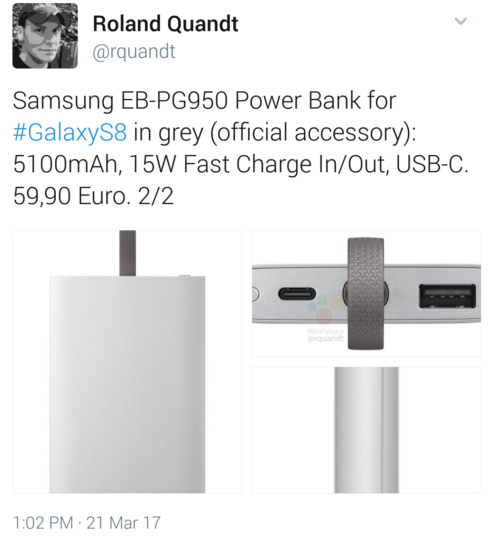 As for the battery capacity of the Galaxy S8, whispers inside the industry have pointed to, at most, a 3,250mAh battery, though the 3,500mAh Galaxy S8+ battery that leaked last week may indicate that the S8’s battery size will remain at the Galaxy S7’s 3,000mAh capacity.

Samsung’s 5,100mAh power bank will catch on with users who can never get enough power, but third-party manufacturers will try their hand at getting some customer appeal with power banks and battery cases of their own. If you want to get a power bank that works best with your Galaxy S8 handset, though, Samsung’s official accessory is as good as it gets.