Galaxy S7 and Galaxy S7 edge to pack a 12MP camera with a 1/2.5 sensor and a powerful loudspeaker

With the launch of the Galaxy S7 and Galaxy S7 edge just around the corner, it’s pretty understandable that the rumor mill is spinning ten to the dozen. Earlier today we revealed that the Galaxy S7 edge would be slightly larger than its sibling, and now, if a listing on the Zauba import database is anything to go by, we have reason to believe that both devices will, in fact pack the brand new 12-megapixel camera module that we previously reported on.

That said, the component itself appears to be larger than we initially thought. The table within the listing suggests that the 12MP shooter will feature a whopping 1/2.5-inch sensor with an individual pixel size of at least 1.4-microns, which is bigger than the standard 1.12-microns pixel size that most mobile phones with an 8-megapixel camera pack. This is rather exciting news as it means the camera will be able to collect more light which should allow for higher-quality images to be captured.

The entry also disclosed that the duo will both have a couple of powerful speakers on board. The first – which we believe to be the earpiece – will have a strength of 1.2W, while the loudspeaker will have a total output of 1.5W. Software optimizations will enable the handsets to playback audio using both speakers in unison for an even louder experience.

On a related note, a leaked Samsung Pay promotional poster has also surfaced online, courtesy of Spanish bank La Caixa, corroborating everything we’ve heard about both handsets so far. It states that the Galaxy S7 will sport a 5.1-inch Quad HD always-on, pressure sensitive display and a 3,000mAh battery, while the Galaxy S7 edge will boast a 5.5-inch identical panel coupled with a 3,600mAh cell. Both devices will have a Snapdragon 820 SoC, 4GB of RAM and IP67 water protection under the hood. 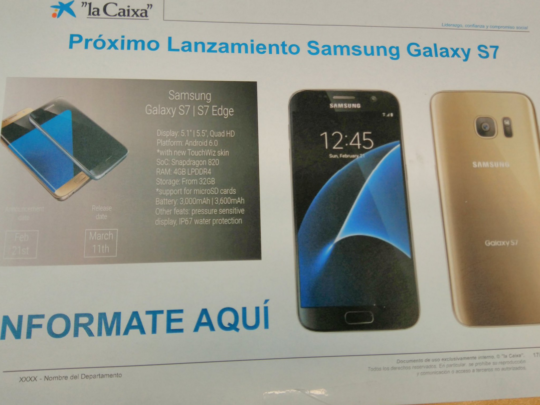