Much has been said and speculated about the Galaxy S5’s hardware, but one thing that hasn’t been discussed in the color options the upcoming flagship will be available in. Well, for those that like some bling on their smartphones, it looks like Samsung will be offering a gold color version of the Galaxy S5. A leaked Vodafone document has confirmed that a gold S5 will be launched at some point – considering it is already listed in a carrier’s database, it’s likely we’ll see the gold option made available right at launch, instead of months later as was the case with the gold Galaxy S4.

If the gold Galaxy S5 is launched at the same time as its non-gold counterparts, parallels will naturally be drawn to Apple’s iPhone 5s, which was also launched with a gold paint job right from the beginning. Add to that the fact that the S5 is also suspected to be powered by a 64-bit processor and sport a fingerprint sensor, and it seems like Samsung will be leaving no stone unturned in making sure that its next flagship offers all that its biggest competitor offers to its consumers, while trumping it through features like a feature-packed 16-megapixel camera and a QHD (2K) display. 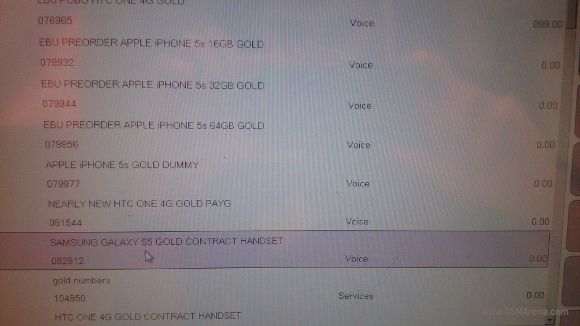 We are just a few hours away from the Unpacked 2022 event. Samsung will unveil one of the highly anticipated Samsung Galaxy S22 series here. While we wait for the launch, there is some good news that will enhance the business capabilities of SME businesses in the UK. According to the official blog of Vodafone, […]

Samsung has teamed up with Vodafone in the Netherlands to launch the Galaxy S9 and Galaxy S9+ Red Bull Ring Edition devices for Formula One fans. The Red Bull Ring edition comes with an NFC-equipped cover that, when put on the phone, applies a unique theme that changes the wallpaper, app icons, and even the […]