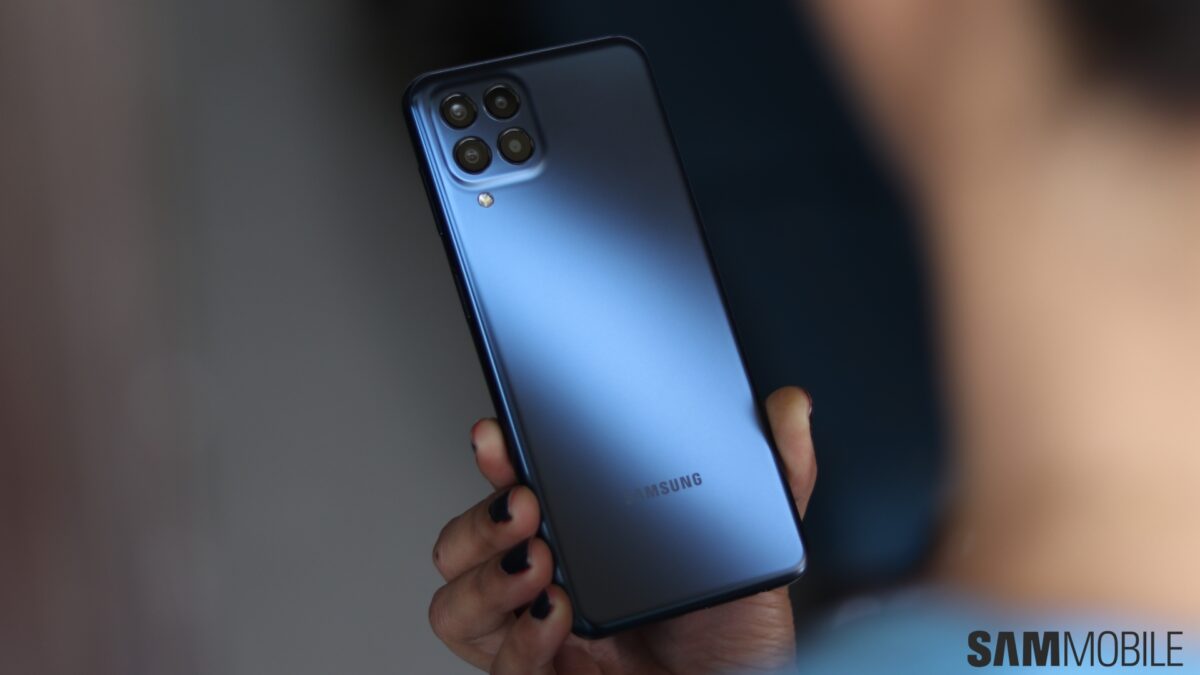 The Galaxy M33 5G is Samsung’s newest addition (as of April, 2022) to its ever-expanding portfolio of aggressively priced Galaxy M smartphones. It brings a couple of neat upgrades over the Galaxy M32 and M32 5G, including the same new Exynos chip that powers the Galaxy A53 5G, a 6,000 mAh battery, a 120Hz display, and 5G connectivity as standard.

Is it a phone worth buying, or should you ignore it and look at other options? Let’s find out in this review. 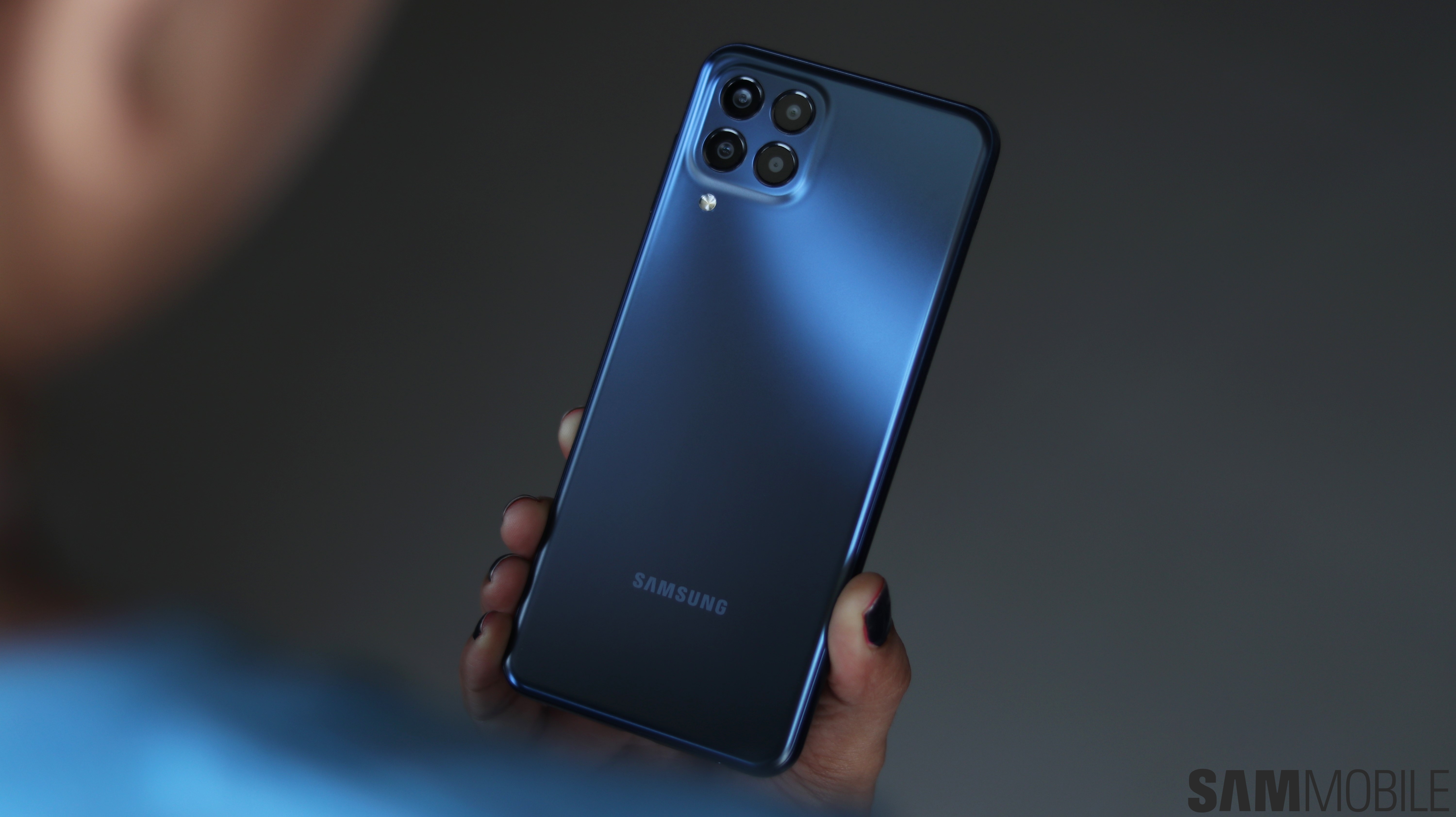 The Galaxy M33 5G can be added to the growing pile of affordable Samsung phones that blow you away with their rear-facing design but look quite outdated from the front. The back of this phone is downright stunning, although it’s also a fingerprint magnet because Samsung isn’t using a matte finish. Plus, the in-hand feel isn’t too premium as the back and sides are all plastic, but that doesn’t take away from the beauty of the design.

The back of this phone is downright stunning

The front, though, has a 6.6-inch screen surrounded by big bezels that ruin the viewing experience in my opinion, especially when coupled with the backlight bleed from the LCD panel, which is particularly noticeable around the waterdrop notch at the top. This might come off as nitpicking to some, but it’s 2022 and too many Chinese phones in a similar — and even lower — price range look considerably more modern in comparison. 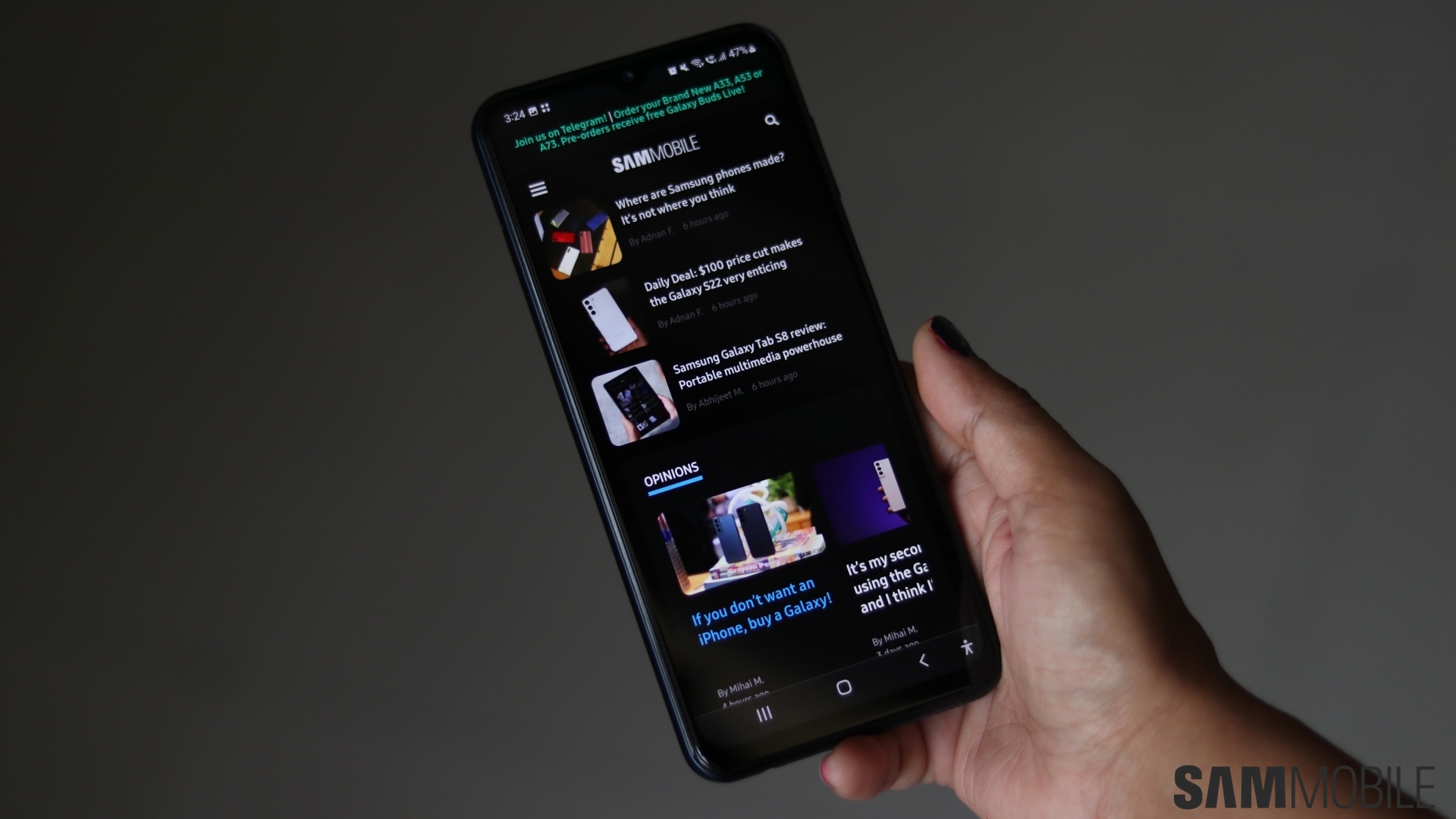 On the sides and bottom, Samsung’s got the usual setup you’ve come to expect from its phones. The right side holds the volume and power buttons, with the fingerprint sensor (which works great) embedded into the latter, and the left just holds the SIM tray (which accepts two SIM cards in addition to a microSD card). At the bottom, there’s a USB-C port, a speaker, mic, and a 3.5mm headphone jack.

The Galaxy M33 5G is a bit on the heavier side thanks to the 6,000 mAh battery inside, but I think most customers will not mind that because battery life on this phone is absolutely phenomenal (more details later in the review). The same goes for the phone’s thickness. At 9.4mm, it’s nowhere near as slim as some of Samsung’s other mid-range phones, though again, the battery life more than makes up for it. 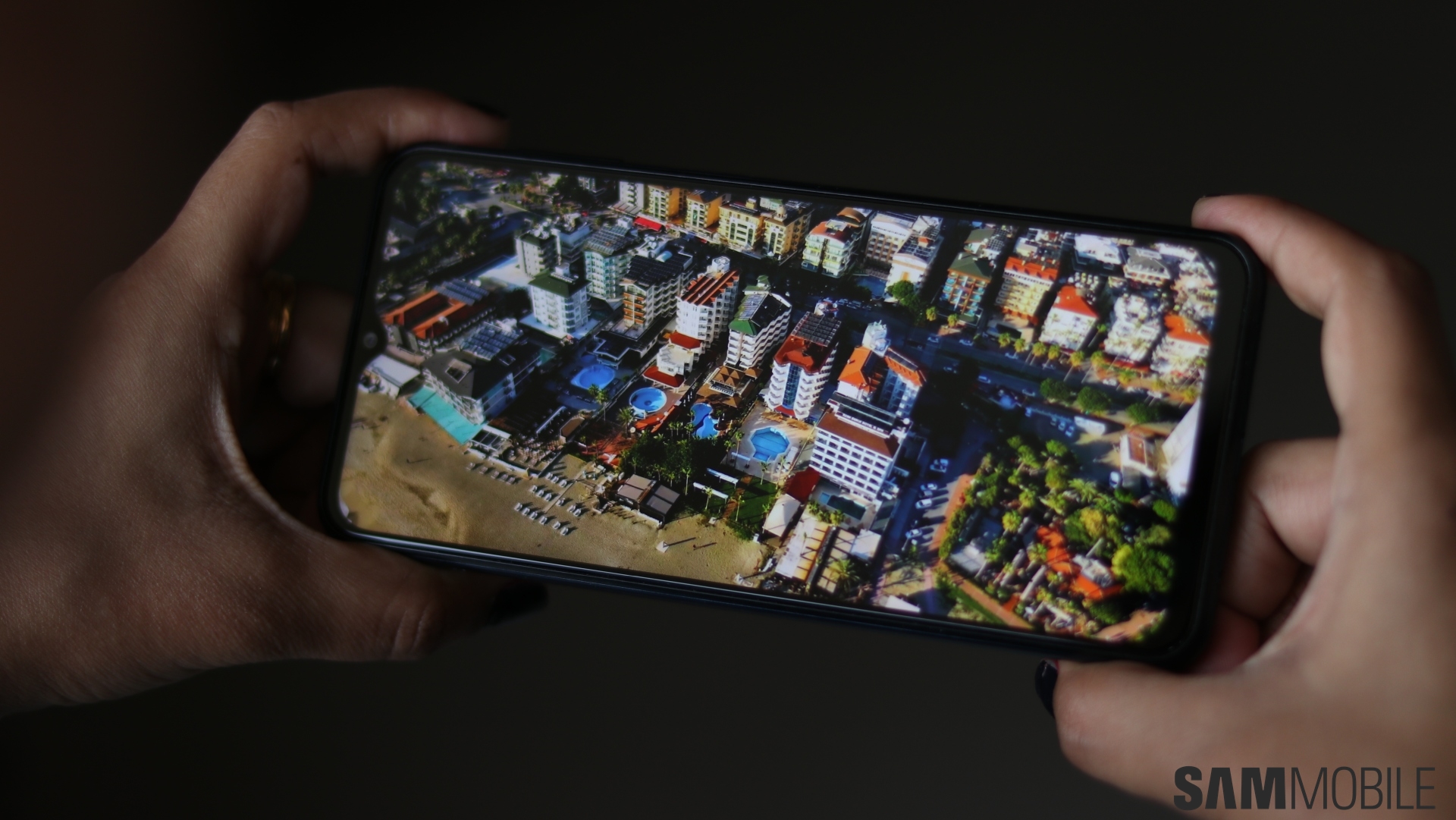 Samsung once used to be the only manufacturer that would offer AMOLED screens on a budget, but these days, it’s not particularly fond of doing that. The Galaxy M33 5G has an LCD display instead of an AMOLED panel, as I mentioned earlier, and that means too many competing Chinese manufacturers (in countries like India) leave this phone in the dust when it comes to how good the screen is.

The LCD screen used here isn’t horrible or anything. It has a Full HD+ resolution, gets sufficiently bright, and has fairly vivid colors. Plus, it’s got a 120Hz refresh rate, so animations and scrolling are smooth. But it’s getting tiring to see Samsung, the company that makes the best mobile displays in the business, constantly avoid the use of AMOLED panels in its affordable phones. 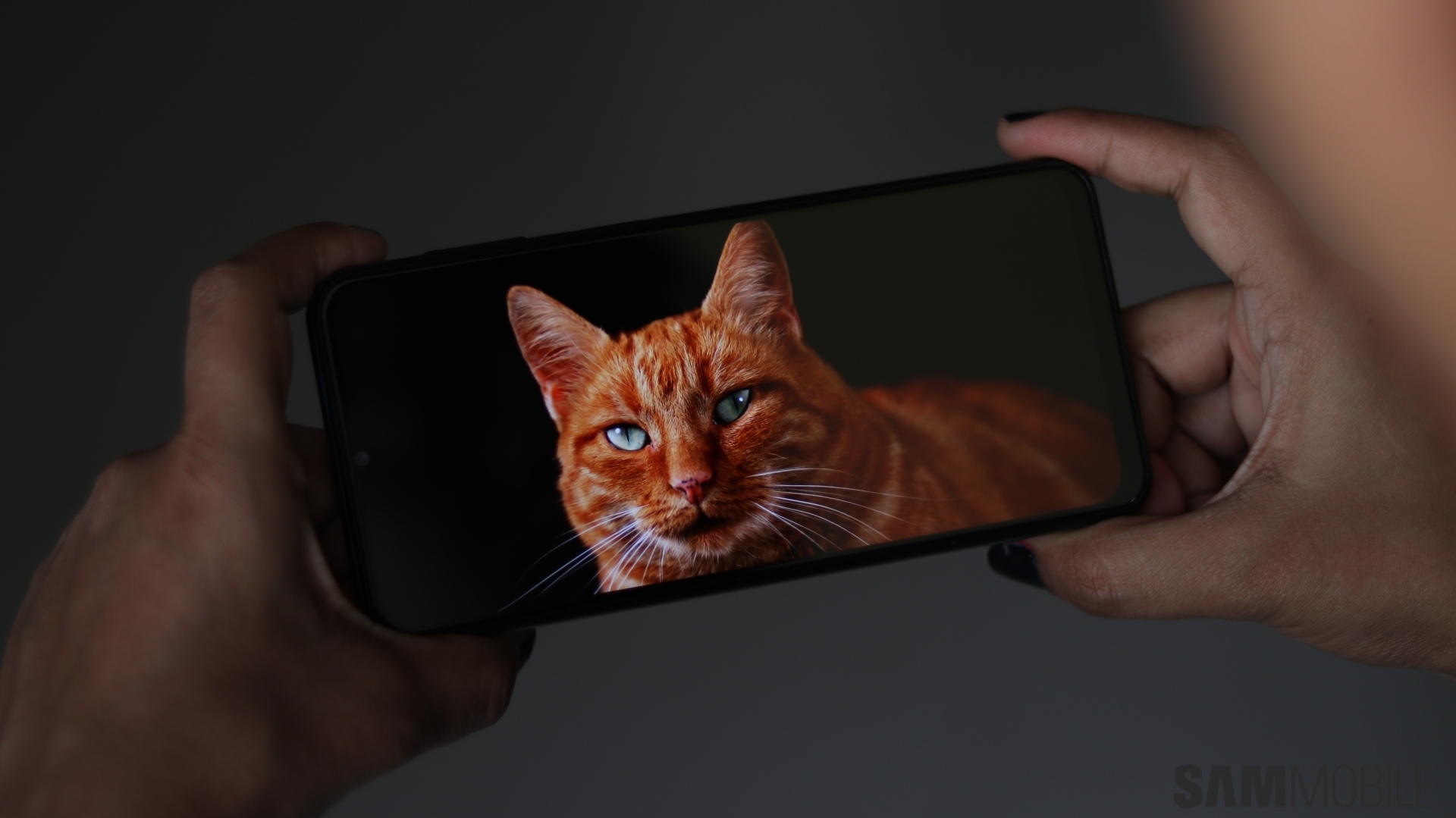 The audio experience is unexpectedly poor, too. The single speaker at the bottom doesn’t get very loud nor has any punch to it, and Samsung’s so-called Voice Focus feature for clearer, noise-free voice calls doesn’t seem to help all that much. As with other recent Galaxy phones in the M33 5G’s category, you’ll just have to make sure you buy a good pair of earbuds because the out-of-the-box audio experience is lackluster to say the least. 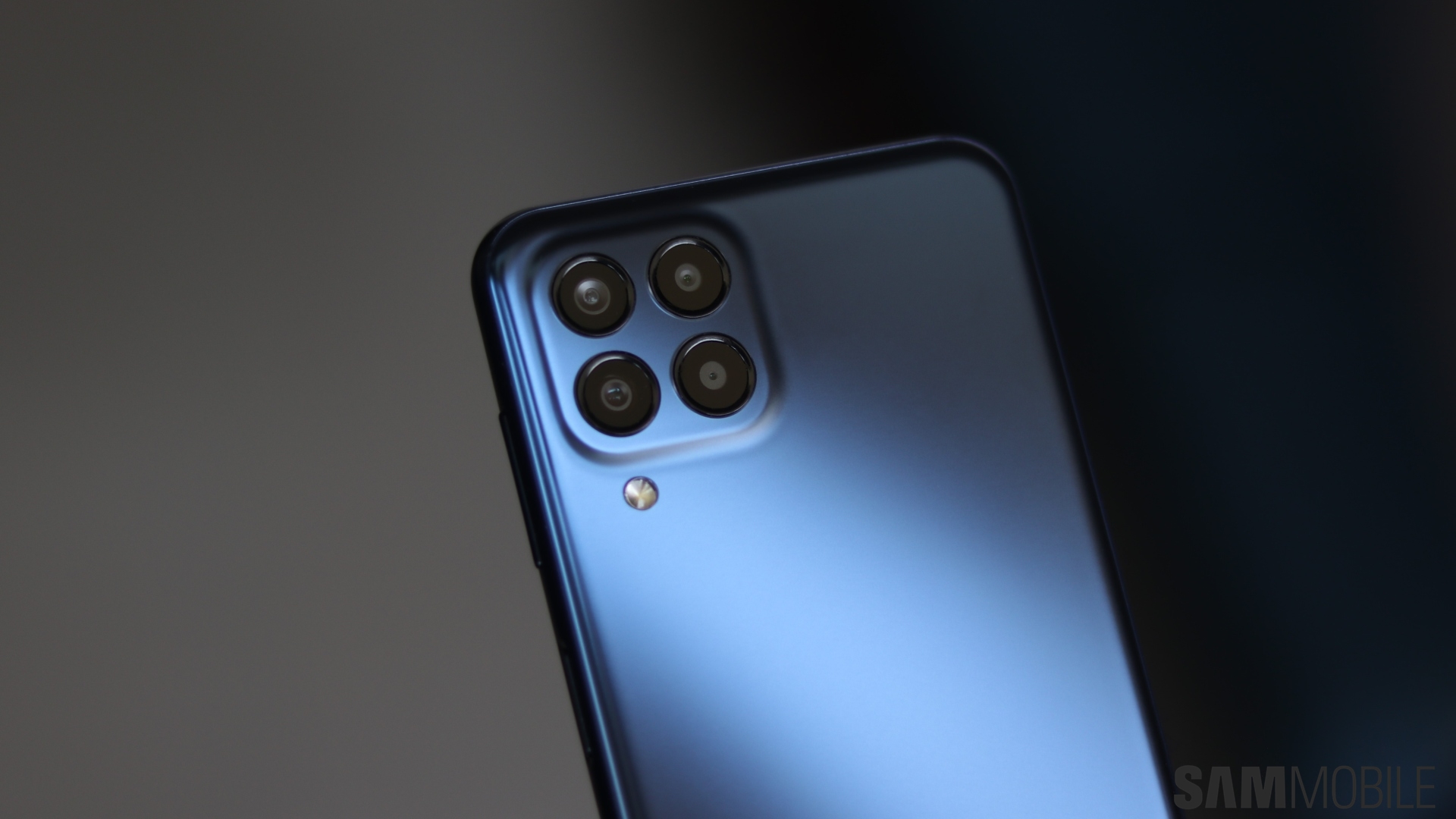 The Galaxy M33 5G comes with the same 50MP+5MP+2MP+2MP main, ultra-wide, depth and macro camera setup as the Galaxy F23 5G, so I won’t go into much detail here and will advise you to check out the camera section of our F23 review.

To give you the gist of it, only the main camera here is truly usable. It takes good pictures in different lighting conditions even though the 50MP resolution doesn’t result in a lot of detail (whether you use the default shooting mode, which gives you 12MP images, or switch to 50MP mode).

The ultra-wide is okay for daylight shots, while the macro camera is too low-res to matter. As for the depth sensor, its presence only serves to pad the camera count because you can get similar bokeh pictures from cheap Samsung phones without a depth camera.

Below are a few camera samples from the M33 5G. 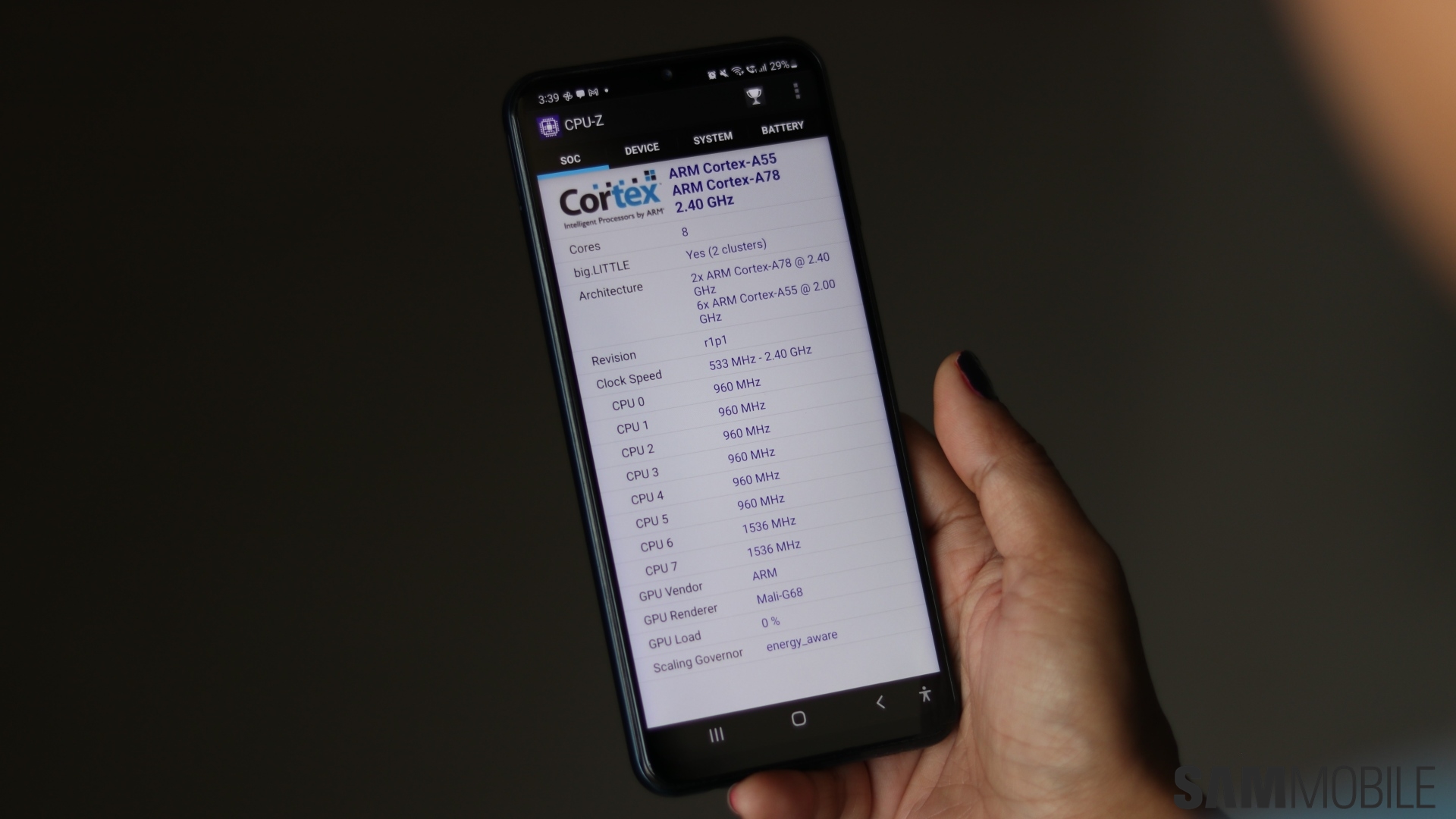 Now we come to the interesting part: With the same processor powering the Galaxy M33 5G and the Galaxy A53 5G, the latter of which costs nearly double based on which variant you buy, you’d think they would perform the same. Well, I have good news: The Galaxy M33 5G actually does better than the Galaxy A53, at least in our testing!

Our only real complaint about the Galaxy A53 5G was that despite the supposedly more powerful and efficient Exynos 1280 chip inside it compared to the Snapdragon 720 that powered the A52, our unit suffered from a lot of stutter in everyday use, something we’ve heard from other users, as well.

But the Galaxy M33 5G surprisingly doesn’t have nearly as much stutter as the Galaxy A53 5G. In fact, for its asking price, the M33 5G performs really well in day-to-day use, with animations and scrolling smooth for the most part. It does stutter, and it can be slow in things like turning on the screen sometimes, but I found its performance to be pretty good in general.

For its asking price, the M33 5G performs really well in day-to-day use

Unfortunately, I can’t say much about gaming performance, at least when it comes to graphically demanding titles. Some older demanding titles did work flawlessly, but the thing is, too many old titles simply don’t support the new Exynos 1280 properly, nor do new ones. Call of Duty does run, for example, but you’re limited to the low and medium graphics presets, which aren’t exactly too resource-heavy.

So, as with the Galaxy A53 5G, the M33 5G’s gaming performance is something I’ll have to revisit later once developers have updated their titles to work with the Exynos 1280’s Mali-G68 GPU. On paper that GPU is certainly powerful and should be able to blaze through all sorts of games, but again, it’s too early to say at the moment. 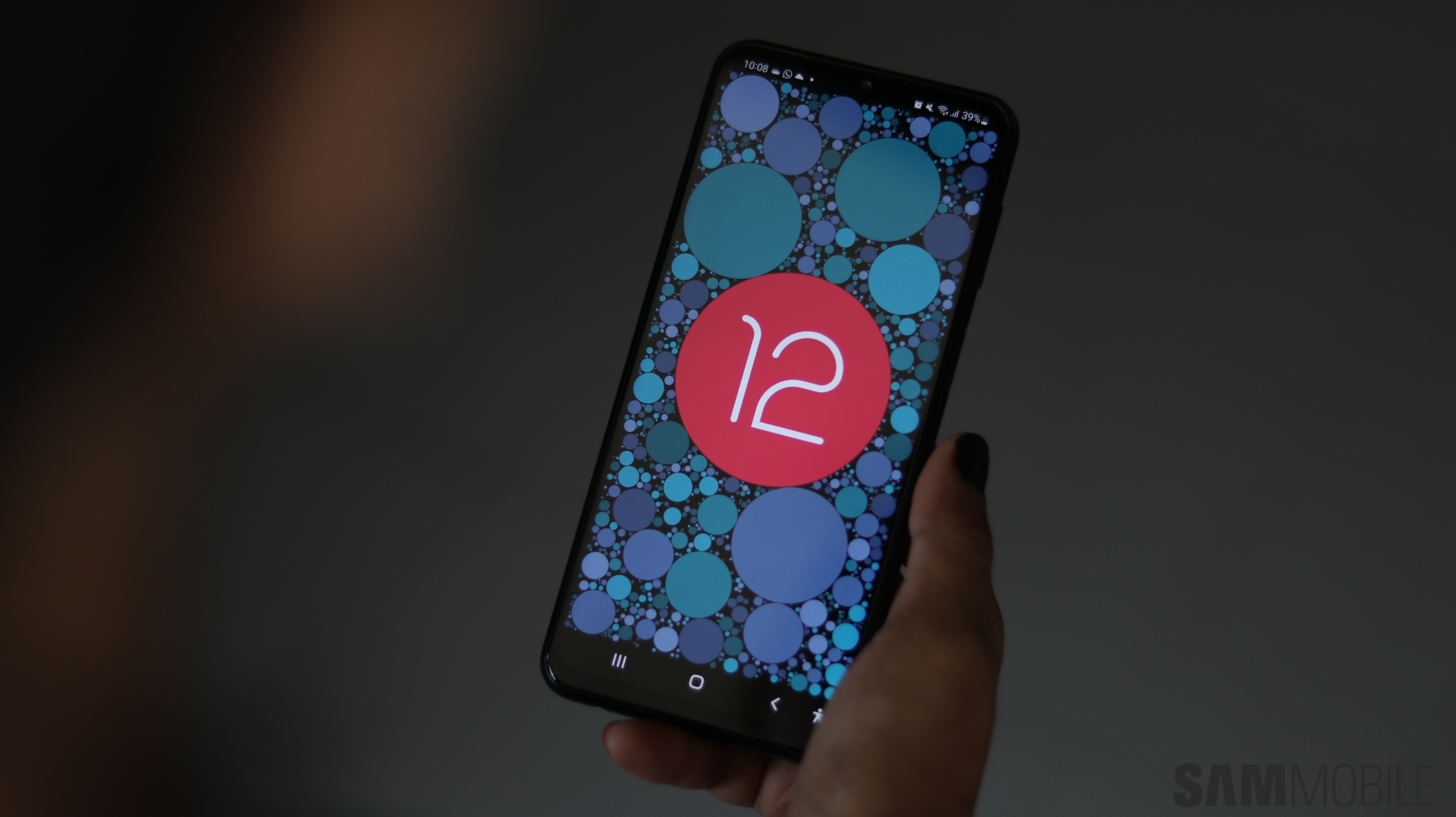 The Galaxy M33 5G comes running Android 12 and One UI 4.1 out of the box, like all of the phones Samsung has launched after the Galaxy S22 lineup. It’s not the most complete Samsung experience, with features like Bixby and Bixby Routines missing, but it’s the most lacking one, either.

You get features like a screen recorder, video call effects, Game Launcher, Link to Windows, Dual Messenger, Quick Share, Music Share, and Secure Folder, along with many others. Some of the fancy Android 12 features, like the ability to change the color palette of icons and menus based on the wallpaper and dim the screen for easier reading in the dark, are also included.

Sadly, the Galaxy M33 5G doesn’t seem to be included in either Samsung’s three-year update guarantee nor its newly announced four-year update guarantee. It will likely only be updated up till Android 14, which isn’t bad but also nothing special compared to the support costlier Galaxy phones now enjoy. 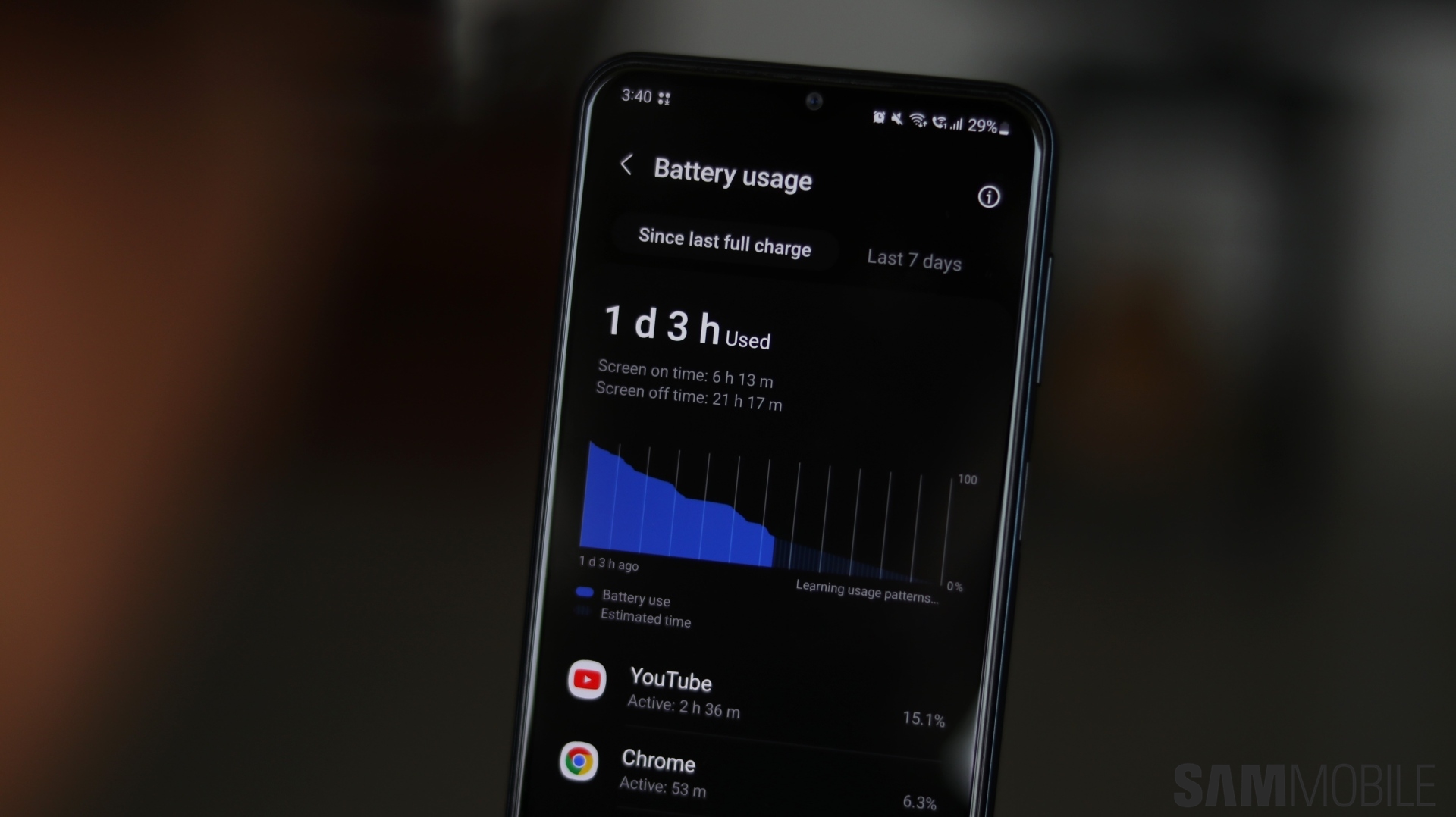 The Galaxy M33 5G, thanks to the combination of the 6,000 mAh battery and the 5nm Exynos processor, is a beast when it comes to battery life. It does as well as those Samsung phones with 7,000 mAh batteries. It’s impossible to drain this phone in a day with anything short of gaming literally all day long.

Expect to see screen on times of 9-10 hours regularly with a mix of medium to heavy use along with a day and a half (give or take a few hours) of total time off the charger, even when the screen is set to 120Hz refresh rate. Yes, it’s that good.

If you buy Samsung’s 25W charger (the box has no charger), charging is quick, too, although a little slower than other mid-range Galaxy devices that support 25W charging. It takes around 1.5 hours to go from 0-100, and half an hour of charging can take the battery percentage to around 45%. A 60-minute charge, meanwhile, gets it up to 75% or thereabouts. 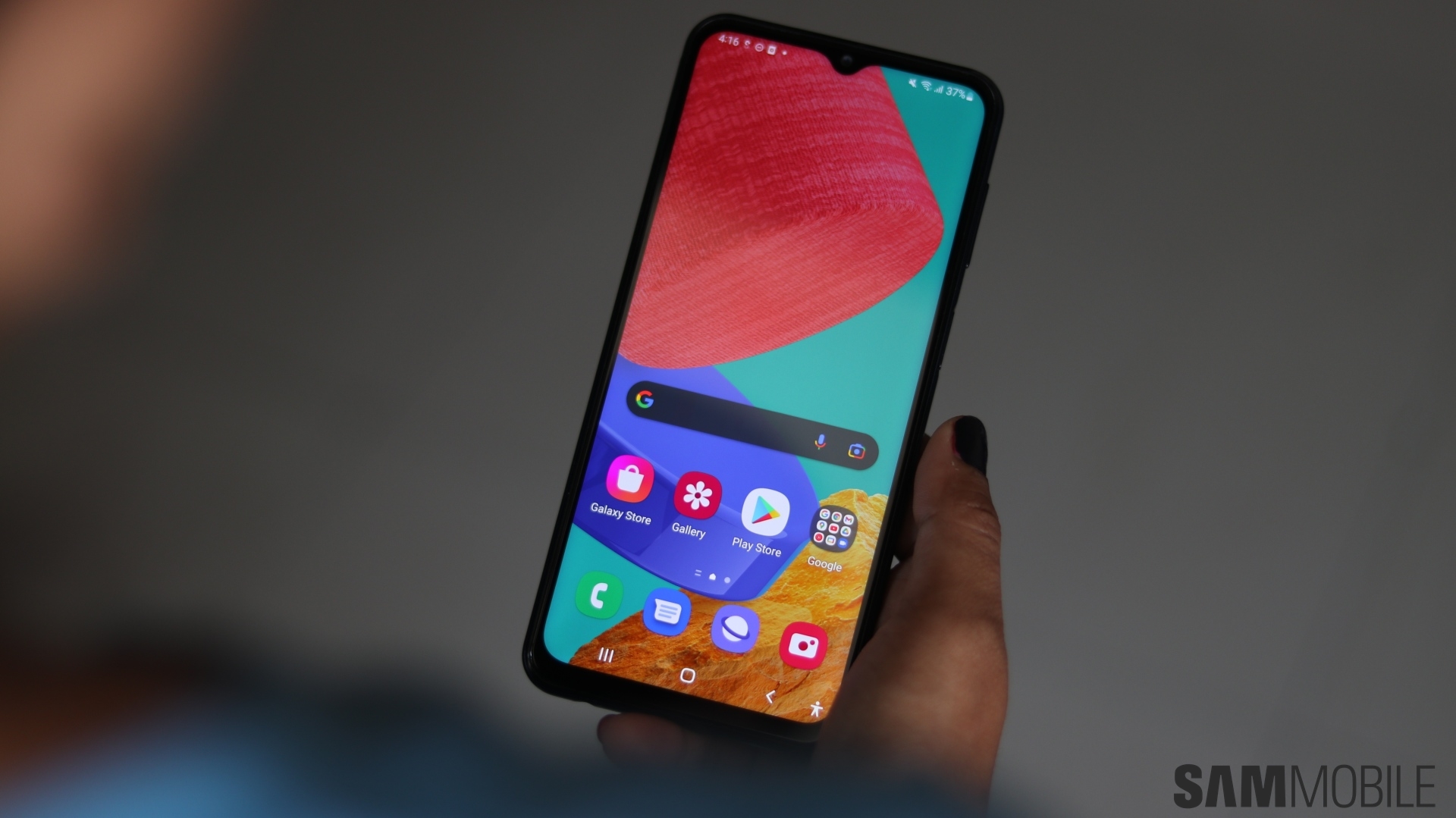 The Galaxy M33 5G is not a great phone. The best things I can say about it is that it’s got fantastic battery life and a powerful processor for the price, although the latter is held back by a lack of proper support in some popular games. And there’s full 5G support and a stunning rear-facing design.

The rest is all pretty boring and most of it is already available on other phones, including Samsung’s own. The Galaxy F23 5G launched in India recently, for example, is a great alternative, especially for its Snapdragon chip that’s supported much better by game developers. It even runs Android 12 like the M33 5G, and the only thing you’re giving up is phenomenal battery life for, well, not-so-phenomenal-but-still-fantastic battery life.

Even last year’s Galaxy A22 5G is an alternative thanks to better cameras and comparable performance, even if it comes with an older version of Android out of the box and is slightly costlier. You’ll probably be happy with the Galaxy M33 5G if you decide to pick it up, but just know that there are other options in this segment, and it’s best to make a decision based on where your priorities lie.

Even though the new year is here, Samsung is still not done pushing last year’s security update to its devices. The company has started rolling out November 2022 security patch to two of the three variants of the Galaxy M33 5G. These two variants are SM-M336B and SM-M336BU, both of which are sold globally. The […]

After unveiling the Galaxy M33 5G smartphone without fanfare, and debuting it in India a few weeks back, Samsung finally launched the Galaxy M33 5G in Indonesia. Expanding its budget series, the Samsung Galaxy M33 5G brings a bunch of great features onboard. In an official newsroom post, Samsung announced the arrival of the Galaxy […]