Samsung’s upcoming W2020 flip phone is nearing its debut, at least judging by the fact that it went through the formality of getting approved by the Wi-Fi Alliance late last week before MySmartPrice picked up the story. The SM-W2020 should be a direct successor to the SM-W2019 introduced last year, and unsurprisingly, the upcoming model is expected to boast various flagship-grade specifications.

As it’s customary, the Wi-Fi Alliance didn’t reveal a lot about the device, other than it runs Android 9. We’ve exclusively reported about a week ago that Samsung’s upcoming SM-W2020 flip phone will be equipped with 512GB of internal storage on the base model, like the Galaxy Fold. It could also have the same UFS 3.0 storage and the newer F2FS file system just like the Note 10 series and the Galaxy Tab S6 do, which should contribute to better performance.

Chances of it having a foldable display are close to none

An unconfirmed rumor, which was largely based on an obscure promotional image, claimed not long ago that the SM-W2020 will have a foldable/flexible display on the inside, similar to the Galaxy Fold, at least as far as the display tech under the hood is concerned. In reality, there’s not enough evidence to support this claim and, until proven otherwise, we don’t believe it to be true. Samsung’s next foldable phone could have a clamshell design but, even so, it shouldn’t interfere with the company’s existing flip phone series; at least not for now.

The SM-W2020 is expected to have two 4.2-inch Full HD Super AMOLED displays facing opposite directions. Each panel should have a resolution of at least 1920 by 1080 pixels. As to when the Samsung SM-W2020 will be unveiled, this could happen in just a couple of months if we assume that the device is scheduled for release one year after the SM-W2019’s debut. Availability will likely be restricted to a handful of markets in Asia, just like it’s always been for Samsung flip smartphone models, but the device could eventually crop up in the lists of some third-party online retailers. 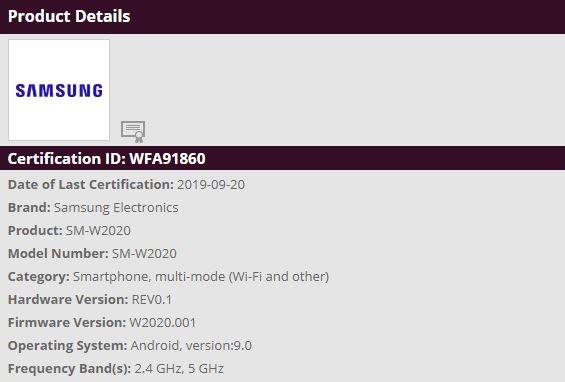