A feature that many found quite useful is now on the way out. It has been confirmed today that Samsung Places will no longer be available on Galaxy smartphones running Android 12.

Android 12 isn’t out yet for Samsung’s smartphones. The company is currently running the One UI 4.0 beta program. It has committed to releasing the Android 12-based One UI 4.0 for some devices before the end of this year.

Samsung Places was launched in 2017 with the Galaxy S8. The feature was only made available in select markets like the United States. Powered by caller profiling company Hiya, Samsung Places enabled users to search for and call businesses from within the dialer.

The feature made perfect sense. Most people still get in touch with a business over the phone when they search for it online. So instead of having to copy the number from a browser to the dialer, Samsung Places integrated the search and call functionality into the dialer itself.

In markets where the feature was offered, Samsung Places replaced the Favorites tab in the native dialer. The search feature provided useful details about local businesses and users could make a call with just one tap.

Hiya has confirmed today that Samsung Places has now been removed from all Samsung devices released on or after January 1st, 2021. The service won’t be available on any Galaxy device after it’s upgraded to Android 12.

Samsung devices not eligible for Android 12 will continue to have access to Samsung Places. So if you’ve got an old device that won’t get One UI 4.0, you can keep using Samsung Places like before. 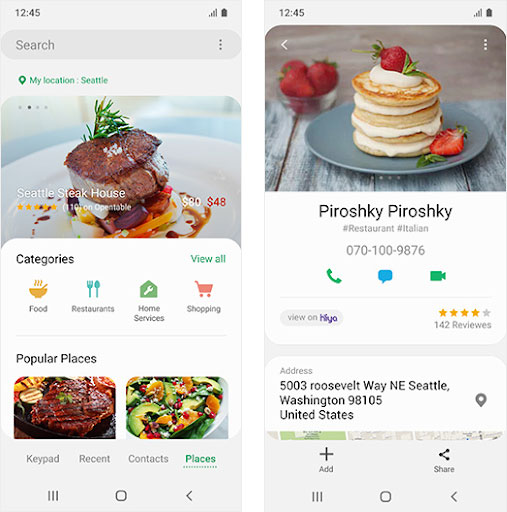