No Android 10 betas planned for Galaxy A series phones Owners of Galaxy A series phones like the Galaxy A50 will have to wait for the stable version of Android 10 to come to their phones, as Samsung isn’t planning to hold a beta program for any Galaxy A smartphone. The company confirmed this in its community forums in Korea. The wording used suggests that plans could change later down the line, especially as it included not one, not two but three A series devices in the public beta testing of Android Pie earlier this year.

Two of those devices were the Galaxy A7 (2018) and Galaxy A6 (2018), for which Android Pie was the first major OS update, and the third was the Galaxy A7 (2017). The A7 (2017) only received the Android Pie update in Korea as it was launched in Samsung’s home country with Android Nougat out of the box while shipping with Android 6.0 Marshmallow in all other countries, but still, the company did have a beta program for its A series phones last year, and it could do the same with Android 10.

Right now, however, owners of Galaxy A series phones eligible for the Android 10 update are out of luck and should not be too hopeful of getting early access. According to Samsung’s official schedule for Android 10, Galaxy A smartphones will start getting the update sometime in April. At least the Galaxy A30 could make the jump in some countries in January, but since these official schedules are subject to change, there’s no telling if Samsung will be sticking to the currently proposed timeline. 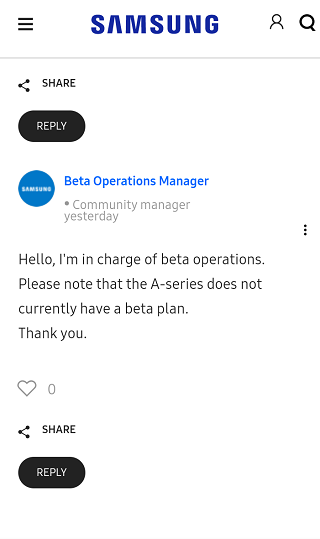