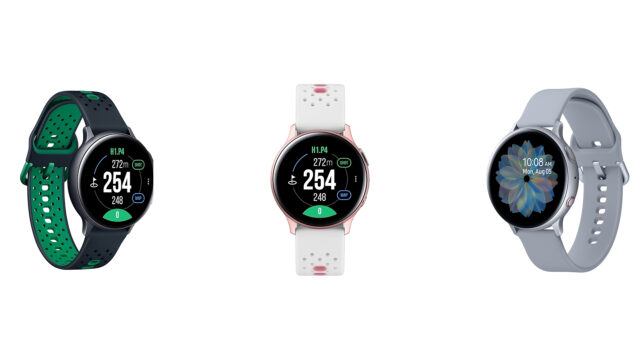 The Galaxy Watch Active 2 Golf Edition comes with upgraded golf shot distance measurement. It also comes with a built-in Smart Caddie app, which offers information on more than 40,000 golf courses worldwide. This variant of Samsung’s newest smartwatch comes in two variants: 44mm Aqua Black and 40mm Pink Gold. They are priced at KRW 393,000 ($323) and KRW 359,700 ($295), respectively. Samsung had also launched golf editions of the Gear S3 and the Galaxy Watch in the past.

The South Korean firm has also introduced a new variant of the Galaxy Watch Active 2 Aluminum with LTE connectivity. It will be available in both 40mm and 44mm sizes. It comes in three colors: Aqua Black, Cloud Silver, and Pink Gold. The 40mm variant is priced at KRW 359,700 ($295), while the 44mm variant costs KRW 393,700 ($323) in South Korea.

These new variants of the Galaxy Watch Active 2 will be available in South Korea starting tomorrow. The company also mentioned that these new Galaxy Watches would be introduced in some markets outside of Korea. The golf-focussed variant will be launched in the UK and the US, while the Aluminum LTE variant will be launched in some Asian and European markets in the future.