Samsung borrowed a page from its smartphone business this year and has created its first-ever Fan Edition tablet, called the Galaxy Tab S7 FE. It’s just as large as the Galaxy Tab S7+ and it comes with an S Pen as well as a very similar suite of productivity apps.

The Galaxy Tab S7 FE isn’t quite a flagship tablet killer, but when viewed next to the Galaxy Tab S6 Lite, Samsung’s new tablet is a much more attractive proposition thanks to a combination of better software and hardware. The Lite variant is newer than the full-fledged Galaxy Tab S6, but it’s also not nearly as well equipped, which means it probably doesn’t have what it takes to remain a challenge to the newer Galaxy Tab S7 FE.

Both the Galaxy Tab S7 FE and the Galaxy Tab S6 Lite have TFT display technology, so they’re both inferior to Samsung’s other AMOLED tablets. At least in regards to the display.

Neither has a high refresh rate display, but the Galaxy Tab S7 FE takes advantage of a larger 12.4-inch panel, which should be a better fit for the included S Pen and accompanying productivity apps. 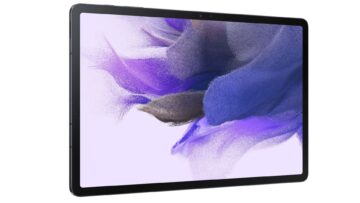 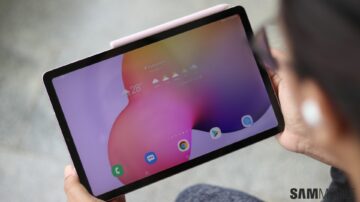 The two Galaxy tablets at hand have similar camera characteristics, including an 8MP main shooter and a 5MP selfie camera. Likewise, they both have dual stereo speakers tuned by AKG but only the older Lite model has a 3.5mm headphone jack. They both have a USB-C port, Wi-Fi 802.11 a/b/g/n/ac, and Bluetooth 5.0.

Beyond these similarities, the Galaxy Tab S7 FE has better hardware in virtually every aspect. It’s powered by the Snapdragon 750G chipset whose performance surpasses than the Exynos 9611 in both CPU and GPU-intensive benchmarks, and by a considerable margin.

The Fan Edition model also has more RAM. Both tablets come with 64GB or 128GB of built-in storage, but the Galaxy Tab S6 Lite is limited to 4GB of RAM in both cases. On the other hand, the Galaxy Tab S7 FE has 4GB as standard and 6GB for the beefier model, which should facilitate better multitasking.

The Galaxy Tab S7 FE is a newer tablet that ships with Android 11 instead of Android 10, which means it will enjoy support for a longer time than the Galaxy Tab S6 Lite.

But aside from this obvious difference, the Galaxy Tab S7 FE also ships with a more powerful suite of productivity apps, such as Noteshelf, Clip Studio Paint, and a 30-day trial to Canva Pro. Up until now, this apps bundle was reserved for the Galaxy Tab S7 flagship series.

The new model supports Samsung DeX through a hardware connection, and it can be paired with an optional Keyboard Cover accessory to boosts on-the-go productivity further. It also features Second Screen and Multi-Active Window.

There’s not much else to be said about these two tablets, except that the Fan Edition looks a tiny bit more modern thanks to squarer edges, the magnetic S Pen stripe across the back, thinner bezels, and the rectangular camera housing.

Samsung’s first Fan Edition tablet is superior to the company’s most recent Lite model in virtually every way. It’s faster, more powerful, and it delivers a more complete software experience. The Galaxy Tab S6 Lite was never a huge hit for Samsung, but now it looks like there’s one less reason for  Android tablet enthusiasts to care about the Lite-branded model.

Samsung is planning to release the Galaxy Tab S7 FE on pre-order terms on June 2. The tablet will ship to customers starting June 18. Samsung has also revealed pre-order prices, which are arguably a bit too high for a device of this caliber.