The Galaxy S21 Ultra is costing Samsung about the same as the Galaxy S20 Ultra to produce, at least according to an estimated bill of materials published by Counterpoint Research, detailing the costs of the entire series. The data suggests that the base Galaxy S21 variant equipped with the Exynos 2100 SoC is the cheapest to produce, while the Galaxy S21 Ultra 5G powered by the Snapdragon 888 chipset is the most expensive model.

Moving on to the rest of the series, the estimated bill of materials for the base Galaxy S21 model and the Galaxy S21+ is even lower compared to last year — by 12%-13%. This decrease in costs was attributed to the Galaxy S21 and S21+ having lower-resolution displays.

In addition, the research firm estimates that the newer Exynos 2100 and Snapdragon 888 chipsets are more cost-effective than their predecessors because they incorporate single-chip 5G solutions. Furthermore, the newer Galaxy S21 Ultra has dropped one of the mmWave antenna modules and has lowered charging speeds to 25W.

And yet, the Galaxy S21 Ultra was released for a lower price

Regardless of whether Samsung is paying more or less to produce the Galaxy S21 Ultra compared to last year’s flagship phone, what’s important to keep in mind is that the latest flagship was released for a lower price. If Samsung has saved any money on manufacturing the Galaxy S21 Ultra, it’s obvious that at least some of those savings were passed on to customers.

As a reminder, the Galaxy S20 Ultra was released for an unprecedented launch price of $1,399, whereas the Galaxy S21 Ultra was $200 cheaper at launch.

According to an estimated breakdown of costs per parts, Samsung was able to save money when manufacturing the Galaxy S21 Ultra in various areas including memory, RF components, battery / charging components, display subsystems, sensors, PCB and connectors, and assembly / test. And of course, the company also saved about $8 in production costs by trimming down the contents of the retail box. 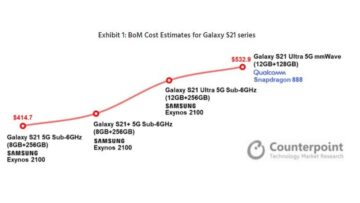 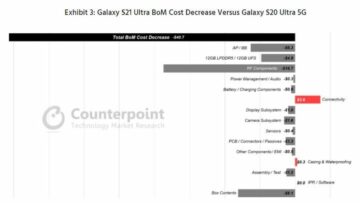