Samsung has announced a new mid-range Exynos chipset today. The Exynos 9609 is Samsung’s second mobile processor in the company’s Exynos 96xx series, following the Exynos 9610 that powers the Galaxy A50. However, the first device to use the Exynos 9609 isn’t a Galaxy phone. It’s the Motorola One Vision, an Android One smartphone unveiled earlier this week.

The Exynos 9609 supports LPDDR4 memory alongwith the more efficient LPDDR4x memory, while the 9610 only supports the latter. There’s no support for Super Slow-mo video recording mentioned on Samsung’s website for the new chip, although even the Exynos 9610-powered Galaxy A50 doesn’t support it. The Exynos 9609 also falls behind the Exynos 9610 in 4K capabilities. The 9610 can encode and decode 4K video at 120 frames per second (fps) while the 9609 maxes out at 60 fps. As far as manufacturing is concerned, both chips are built on Samsung’s 10nm FinFET process.

Exynos 9609 to power some upcoming Galaxy A series devices?

The Exynos 9609 could be a chip exclusive to some markets like the Exynos 7904, which is a downgraded version of the Exynos 7885 that debuted on the Galaxy A8 (2018). Perhaps upcoming devices like the SM-A507F and SM-A707F, expected to be modified versions of the Galaxy A50 and Galaxy A70, will be the first Samsung devices to use the Exynos 9609, but we’ll need to wait for more info from the company to be sure. 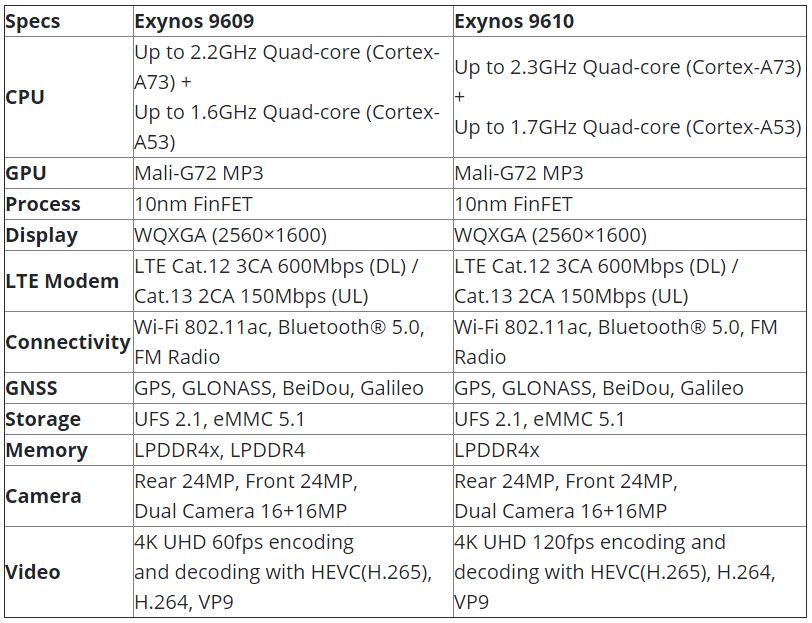