Samsung has announced that it will be issuing a software update to all models of the Galaxy Note 7 in the United States this week that will repeatedly warn customers that their handset is unsafe and should be exchanged if it sports the faulty battery that has resulted in over seventy devices catching fire while on charge.

Verizon-branded models of the units have already received the upgrade, and it’s expected to arrive on other carrier-exclusive models later today or sometime tomorrow. Unlocked models will receive the OTA towards the latter part of the week with some reports suggesting that it will start rolling out on Saturday.

The update will also display a green battery icon at the top of the Galaxy Note 7’s screen if it packs a stable cell. This will bring it in line with the 500,000 replacement models that Samsung has already shipped to the United States for distribution to customers with a dangerous device. 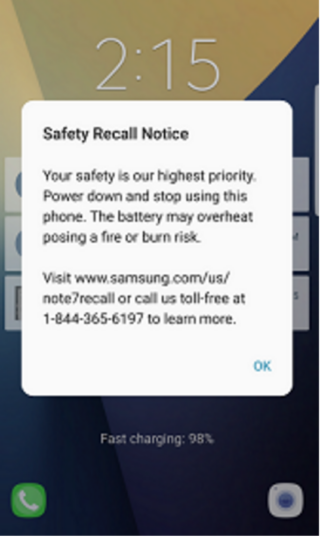