If you cast your mind back to June of 2015, you may recall that Samsung added Wi-Fi-only variants of the Galaxy Tab E 9.6 and Galaxy Tab E 8.0 to its extensive tablet lineup. However, the devices didn’t do as well as the South Korean company would have liked, and it’s now attempting to inject a new lease of life into the Galaxy Tab E series by introducing a newer 8-inch model in Taiwan. Unlike its older, larger sibling, the latest Galaxy Tab E 8.0 carries not only 4G LTE connectivity and an upgraded spec sheet, but a steeper price tag as well.

With regards to its internals, the tablet packs an 8-inch TFT display with a resolution of 1280 x 800 pixels, a 1.3GHz Snapdragon 410 quad-core processor with Adreno 306 GPU, 1.5GB of RAM, 16GB of internal storage, a microSD card slot, a 5MP rear-facing camera, a 2MP selfie shooter, and a rather hefty 5,000 mAh battery. The manufacturer claims that the battery is capable of up to 13 hours of internet usage and video playback. It also comes with ‘Kids Time Plus’ app that provides educational and entertainment content suited for kids.

As far as connectivity goes, the Tab E 8.0 (2016) with Android 5.0 Lollipop supports voice calling and a whole host of other networking options, including 4G LTE, 3G HSPA+, dual-band Wi-Fi b/g/n, Bluetooth v4.1 (with LE and EDR), GPS (with A-GPS), and microUSB 2.0 port. There’s also an IR blaster, which can be used to control various electronic devices in your home, such as televisions, projectors and electric fans. Buyers will also be entitled to 100GB of cloud storage through Microsoft OneDrive.

The slate is currently a Taiwan-exclusive where it’s up for grabs in its traditional Classic White color for TWD 8,990 ($270). At this precise moment in time, we have no indication as to whether the unit will see a global release. Although we assume the deciding factor will be measured on its success in Taiwan – so the more sales there are of the device in the region, the better chance there is of it coming to Europe and North America. 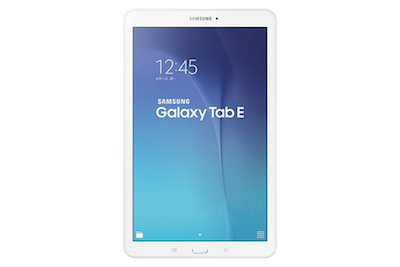