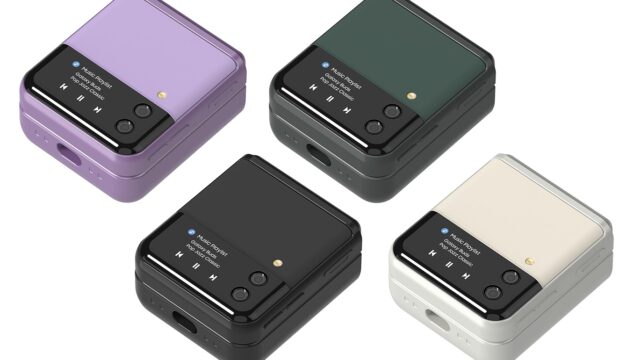 The protective case borrows its design from the Galaxy Z Flip 3 foldable device but has a faux cover display and dual-camera setup. It doesn’t add new functionalities, and it wraps around the standard charging case instead of replacing it.

In essence, the flip phone case follows the same principles as the Anycall Galaxy Buds Pro cases sold last year, except the new model is inspired by a new clamshell smartphone as opposed to a couple of old — yet still iconic — clamshell feature phones.

Samsung gave away the faux Galaxy Z Flip 3 cover cases to early Galaxy Buds 2 pre-order customers in South Korea, and as yet, they don’t seem to be available for purchase separately. However, Samsung is selling last year’s Anycall covers on their own now, so chances are that the Galaxy Z Flip 3 cover will also pop up at Samsung’s online shop eventually.

The previous Anycall cases for the Galaxy Buds Pro now cost 33,000 Won (~$30) when purchased separately. We suspect that if Samsung decides to sell the Flip 3-inspired cases separately, they’ll hit the shelves for about the same $30 price.