Samsung published an article on its Korean portal a couple of days ago, revealing a February 12 launch date for the Galaxy Home Mini. That page was quickly pulled and it left us wondering if its removal meant that the smart speaker’s debut has been pushed back.

That might be far from the truth, according to a recent thread on the Samsung Korea community website which suggests that the Galaxy Home Mini could hit the shelves this Friday, February 7.

The Galaxy Home Mini wait might be over sooner than expected

The aforementioned thread appears to contain a screenshot of a conversation with a Samsung representative, who claims that the Galaxy Home Mini will become available on February 7 for the price of 99,000 won, or the rough equivalent of $83.

Now, as official as this may sound, we should keep in mind that Samsung’s reps, particularly when it comes to customer service, have a bad history of misinforming customers with erroneous availability details. It was only a couple of weeks ago when a customer was wrongly informed – most likely – by a Samsung rep that Android 10 is coming to the Galaxy S8 and Note 8 this year.

However, the Galaxy Home Mini is more than just a software update. It’s a brand new hardware product and it’s been beta-tested in Korea many months ago. With that in mind, South Korean fans have had a more open communication channel with Samsung regarding the Galaxy Home Mini for a few months.

It would probably make more sense for Samsung to wait a few more days and launch the Galaxy Home Mini at Unpacked on February 11 alongside the Galaxy S20 series and the Galaxy Z Flip. But perhaps the latest bit of information concerning the smart speaker’s launch date and price in the country is accurate, and the device could finally hit the shelves by the end of the week. And even if it misses this date, technically the product should still be on track for an ‘early-2020‘ release. 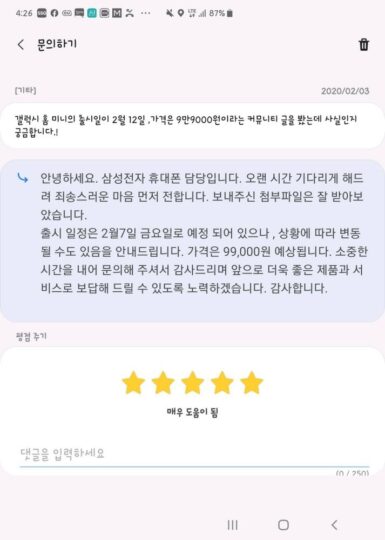