Samsung Galaxy A71 5G and Galaxy A21s certified ahead of release

The Galaxy A71 5G and Galaxy A21s are drawing closer to their official launch, with Samsung obtaining new product certifications for both devices earlier this week.

More specifically, the Wi-Fi Alliance on Tuesday certified a Samsung-made handset denoted as the SM-A716U, which is likely going to launch as the Galaxy A71 5G. Earlier today, the standards body also published interoperability documentation referencing another Samsung product – the SM-A217F/DSN. Judging by that model number, this is the upcoming Galaxy A21s that’s been the subject of numerous rumors in recent months.

A pair of Android 10 mid-rangers is coming this spring

SamMobile exclusively reported on the existence of the newly certified Galaxy A71 5G three months ago, after learning that both carrier and unlocked variants were in development for the United States. The WFA certificates confirm both lines will ship with an Android 10-based version of One UI, in addition to revealing at least one version of the Galaxy A21s will offer dual-SIM capabilities.

On the other hand, both support spatial multiplexing, a new type of networking solution that increases mobile data rates by combining signals from multiple antennas. This is significant because it adds further credence to a recent benchmark sighting that suggested the Galaxy A21s will leverage Samsung’s Exynos 850 chip. Namely, the said system-on-chip supports that particular MIMO technique, as does the Exynos 980 believed to power the Galaxy A71 5G.

According to previous reports, the Galaxy A21s will also pack a 5,000mAh battery, but what’s less clear is whether it’ll manage to beat the Galaxy A71 5G to the market. The latter already secured its Bluetooth certification in early March, so the timing of its debut now appears to be entirely on Samsung. 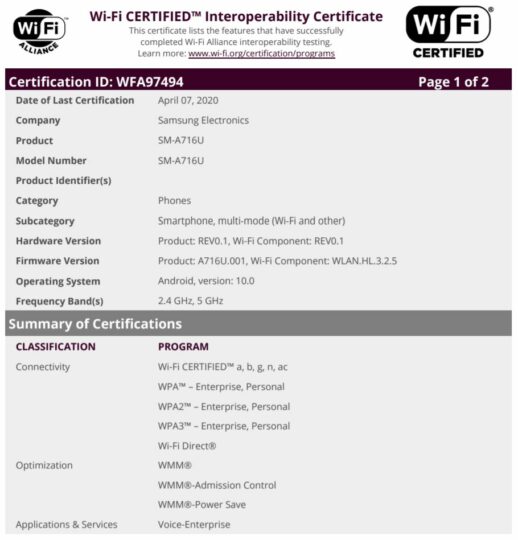 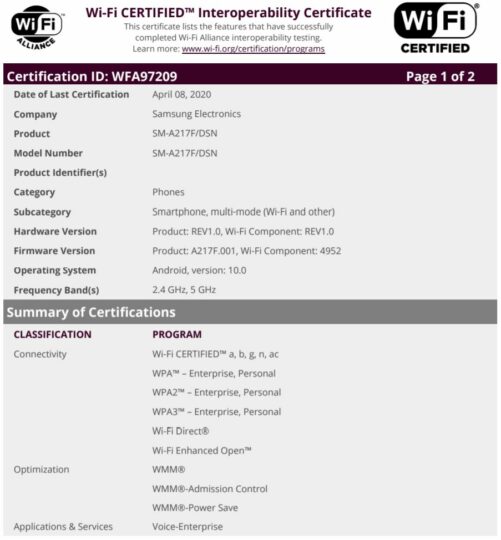 More news »
Galaxy A21s goes on pre-order in South Korea By Asif S.|3 weeks ago
Galaxy A71 5G goes on sale in Thailand as a mobile gamer’s companion By Mihai M.|4 weeks ago
Samsung Galaxy A21s review: Only worth it for outstanding battery life By Abhijeet M.|1 month ago
Why buying the Galaxy A21s, A31, A41, or A51 5G makes sense By Abhijeet M.|1 month ago
SamMobile Shop
Opinions More »
Reasons why you may want to avoid buying the Galaxy Watch 3
3 hours ago